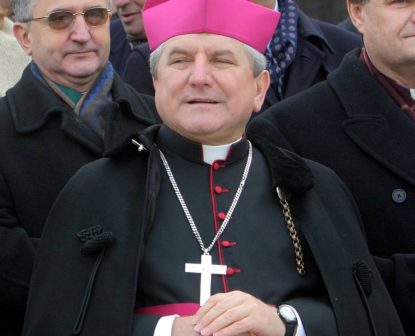 Polish Bishop Edward Janiak of Kalisz is pictured in a May 16, 2020, photo. The Vatican has imposed sanctions on the bishop for his handling of cases involving sexual abuse by clergy. Bishop Janiak resigned in October 2020. (CNS photo/Mieczyslaw Michalak, Agencja Gazeta via Reuters)

WARSAW, Poland (CNS) — The Vatican has imposed sanctions on two Polish Catholic bishops, who resigned in 2020 after being accused of ignoring sexual abuse by their clergy.

In simultaneous statements March 29, the apostolic nunciature in Warsaw said action had been taken against Archbishop Slawoj Glodz of Gdansk and Bishop Edward Janiak of Kalisz on the basis of canon law and Pope Francis’ May 2019 motu proprio, “Vos estis lux mundi.”

The statement said the decisions were made after investigations into their handling of “abuse committed by some clergy against minors,” as well as “other issues” related to their time in office.

It ordered both retired prelates to live outside their former dioceses and said they were forbidden to participate in public religious celebrations or lay meetings. They would be required to pay an “appropriate amount from personal funds” to the Polish church’s St. Joseph Foundation, set up in 2019 to fund preventive activities and assistance to abuse victims.

The pope accepted the resignation of Bishop Janiak in October, after claims in two TV documentaries that he violated Polish law and Vatican guidelines by brushing aside complaints against local priests.

In June, the Vatican also ordered inquiries into Archbishop Glodz, who resigned Aug. 13 after he was accused by local priests of failing to respond to abuse complaints.

Investigations are being conducted against several other bishops, including Krakow Auxiliary Bishop Jan Szkodon, who was suspended in February 2020 after being accused by the Gazeta Wyborcza daily of abusing an underage girl.

In November, the Vatican denied a cathedral funeral for Cardinal Henryk Gulbinowicz after he was implicated in sexual abuse.

In mid-March, Poland’s TVN24 said Cardinal Stanislaw Dziwisz, retired archbishop of Krakow who served for 39 years as secretary to St John Paul II, and three bishops from the Diocese of Bielsko-Zywiec could face jail sentences after being accused by a Polish state commission of ignoring abuse by Catholic clergy.

The latest Vatican sanctions were announced a day after Archbishop Glodz’s successor, Archbishop Tadeusz Wojda, was installed in Gdansk’s cathedral.