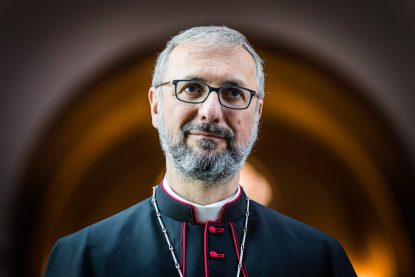 German Archbishop Stefan Hesse of Hamburg is pictured in a May 7, 2020, photo. Pope Francis has granted Archbishop Hesse a leave of absence from his duties after a recent report on the handling of of clergy sex abuse cases in the Cologne Archdiocese, where he served as director of personnel and vicar general. (CNS photo/Lars Berg, KNA)

The archbishop recently offered his resignation after a report on the handling of clergy sex abuse cases in the Cologne Archdiocese, where he served as director of personnel and vicar general.

The question as to if or when the pope will accept Archbishop Hesse’s resignation remains open. The Vatican has so far not issued any statement on the case.

Pope Francis now has time to unhurriedly decide about the resignation, KNA reported.

Further information was not available, a Hamburg Archdiocese spokesman said, adding that the pope had confirmed the steps the archdiocese had already taken. Archbishop Hesse remains archbishop, meaning that the bishop’s see is not vacant.

Archbishop Hesse has no right to demand that his resignation be accepted. However, the Hamburg Archdiocese noted on its webpage, “We assume that Rome will respect the archbishop’s request.”

Archbishop Hesse had asked the pope to relieve him of his duties with immediate effect and offered to resign after the March 18 publication of the long-awaited experts’ report on the archdiocese’s handling of abuse cases.

The study accused Archbishop Hesse of 11 breaches of duty in how he dealt with cases of sex abuse. The report said he neglected to initiate church proceedings to clarify the abuse allegations and, in several cases, failed to inform either public prosecutors or the Vatican.

NEXT: Sharing the Gospel means embracing the cross, pope says at chrism Mass