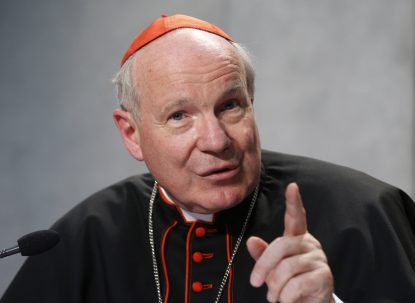 Austrian Cardinal Christoph Schönborn speaks during a news conference at the Vatican April 8, 2016. Cardinal Schönborn, a longtime member of the doctrinal congregation, said he was “not happy” with the Vatican’s mid-March statement on same-sex unions. (CNS photo/Paul Haring)

BERLIN (CNS) — Austria’s Cardinal Christoph Schönborn has said he cannot deny same-sex couples a blessing if they request one and that he was “not happy” with the Vatican’s mid-March statement on same-sex unions.

On March 24, the cardinal tweeted, “A mother will not deny her children a sincerely requested blessing. Neither will the mother church. Whether a church blessing is always the right form of expression is something that still needs to be given careful consideration.”

Since the March 15 clarification by the Vatican Congregation for the Doctrine of the Faith that any form of blessing of a same-sex union is “illicit,” there have been many critical responses from individuals, theologians and organizations in the Austrian Catholic Church. Some parishes declared solidarity with homosexual people, while some clergy openly rejected the statement from the Vatican.

Now, Cardinal Schönborn, a longtime member of the doctrinal congregation who, for 22 years headed the Austrian bishops’ conference, has entered the debate.

“I was not happy about this statement of the Congregation for the Doctrine of the Faith for the simple reason that the message that came across in the media throughout the world was only a ‘no.’ And that is a ‘no’ to the blessing; and that is something that hurts many people deeply, like they would feel and say: ‘Mother, don’t you have a blessing for me? I am your child too, after all,'” he told the Vienna archdiocesan newspaper Der Sonntag.

Cardinal Schönborn said the “positive intention” behind the doctrinal congregation’s note “has not come across at all.”

The point, the cardinal said, was to demonstrate the church’s “high esteem for sacramental marriage, which has become almost a rarity in today’s world. But it is something great and sacred: the covenant of a man and a woman; a covenant for life, promised and made before God, which can then also lead to children who are perceived as a gift from God.”

Cardinal Schönborn said the congregation had a “legitimate concern” that a formal blessing of a same-sex couple could be confused by some people as similar to recognizing and blessing a sacramental marriage.

However, he said, “this ‘yes’ to the family need not be said in a ‘no’ to all other forms” of cohabitation.

“The church has long since become accustomed — it has been a painful, long process — to the fact that it is not the only voice that has a word to say about partnerships,” he said. “Since the 19th century, the state has taken back the church’s sovereignty over marriage, and it is natural for us — even for the church — to marry in a civil ceremony before marrying in church. And yet the state’s understanding of marriage as a contract is something essentially different from the understanding of sacramental marriage. We have been living with this for a long time.”

The cardinal was answering a question from a reader in Der Sonntag, the weekly newspaper for the approximately 1.2 million Catholics in Austria’s largest diocese, which encompasses the Vienna area and the eastern half of Lower Austria.

A father of a homosexual son wrote to the paper: “All people are equal before God. Jesus treated all people equally. My son is also homosexual and happily married, was an altar boy for years and a devout Christian. Once again, I am sorely disappointed in the Catholic Church. You can’t be surprised when many people say, ‘I have a good relationship with God, but I have big problems with the church.’ I’m curious to see what your attitude is on this.”

“Even if, as a priest or bishop, I have to say: ‘You have not realized the whole ideal. But it is important that you live your lives on the basis of human virtues, without which there is no successful partnership.’ And that deserves a blessing. Whether the right form of expression for this is an ecclesiastical blessing ceremony — that is something to think about carefully.”

The cardinal explained that he approached the problem from a simple observation that many mothers, including his own mother to this day, bless their children, and that a mother never refuses a child a blessing even if they have problems in life.

“The church, as it is traditionally said, is ‘mater et magistra, mother and teacher.’ She must teach, but she is first of all mother. And many people who have same-sex feelings and who are living same-sex lives are particularly sensitive to this very question: ‘Is the church a mother to us?’ And they remain children of God. And they also want to see the church as a mother, and that is why this declaration has hit many so particularly painfully, because they have the feeling that they are being rejected by the church. ”

“You can never bless enough,” Bishop Hermann Glettler of Innsbruck said March 24 on the Austrian ORF news program ZIB Nacht. Bishop Glettler is responsible for marriage and family in the Austrian bishops’ conference.

On March 23, Bishop Josef Marketz of Gurk said in another ORF program that he would defy the Vatican ban: “For me, homosexuals are not second-class Christians, and of course I will always give them a blessing.”

In neighboring Germany, the debate among Catholics has not abated and is opening old rifts among bishops. While some German bishops like Cologne Cardinal Rainer Maria Woelki expressed support for the Vatican statement, Bishop Georg Bätzing, head of the German bishops’ conference, said that in his capacity as bishop of Limburg he did not understand why the congregation issued the note.

“A document that in its argumentation so blatantly closes its mind to a progress in knowledge of both a theological and human-scientific nature will lead to pastoral practice ignoring it,” the bishop said in a statement. He called for “a reassessment of same-sex partnerships and a further development of the church’s sexual morality.”