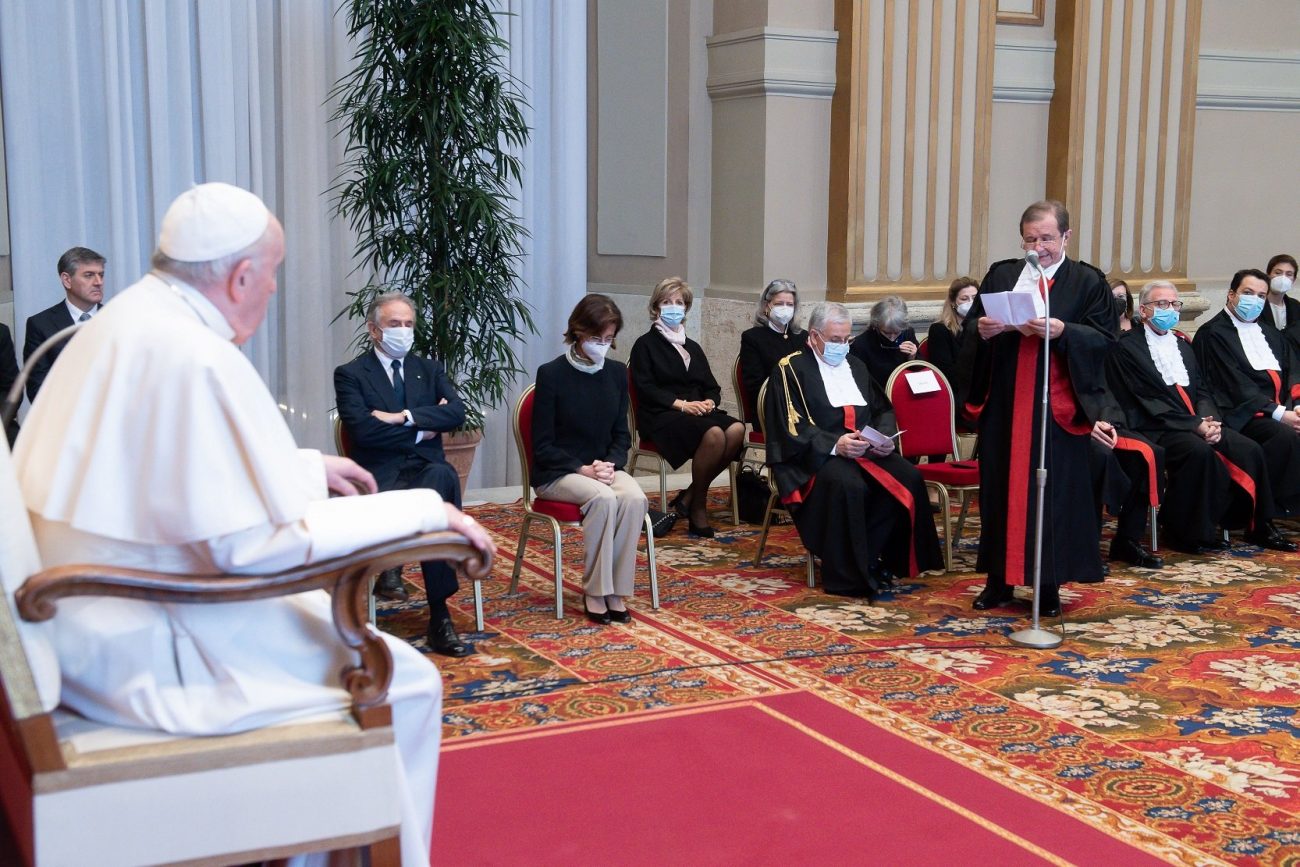 Pope Francis listens as Gian Piero Milano, promoter of justice at the Vatican City state court, speaks during the opening of the 92nd judicial year of the court at the Vatican March 27, 2021. In his address, the pope focused on the need to prevent, investigate and prosecute financial crimes. The event was attended by Italian Prime Minister Mario Draghi. (CNS photo/Vatican Media)

VATICAN CITY (CNS) — Signaling further reforms of the Vatican City State penal code, particularly when it comes to financial crimes, Pope Francis said the laws must reflect “the equality of all members of the church” by doing away with “privileges that go back in time and are no longer in keeping with the responsibility of each for building up of the church.”

Meeting March 27 with the judges, prosecutors, investigators and other members of the Vatican’s state tribunal, the pope also encouraged efforts to facilitate international cooperation in investigations to ensure an accurate exchange of information in a timely manner.

Earlier in the week, the 42-page decision of a London judge was released explaining why he overturned a court order freezing the assets of a financier being investigated by the Vatican for extortion, fraud and money laundering in connection with the Vatican Secretariat of State’s purchase of multimillion-dollar property in London’s Chelsea neighborhood.

The judge said that in asking the British government to freeze the assets of Gianluigi Torzi, who helped broker the deal, the Vatican’s application contained “material non-disclosures and misrepresentations” that were, “in some instances, egregious.”

The Vatican court’s investigation into the property deal is ongoing.

Pope Francis told members of the Vatican court that the multiple changes enacted over the past eight years in the Vatican’s criminal code will be more effective “to the degree that they are accompanied by further penal reforms, especially for combatting and repressing financial crimes, and by the intensification of other activities aimed at making international cooperation between the investigative organs of the Vatican and analogous institutions of other nations simpler and speedier.”

Of course, he said, the effectiveness of legal measures to contrast crime in the Vatican, “especially in the economic and financial sphere,” also require that everyone involved “is always inspired by the founding principles of ecclesial life and, at the same time, takes into account the parameters and good practices in force on the international level.”

A “reality like the Catholic Church” is required to conduct itself in an “exemplary” manner, he said.

“We are called to witness, concretely and credibly, in our respective roles and tasks, to the immense patrimony of values that characterizes the church’s mission, to her being ‘salt and light’ in society and in the international community, especially in moments of crisis such as the present one,” Pope Francis said.

The papal audience was part of the ceremonies marking the beginning of the Vatican City State’s tribunal’s judicial year. The events began in the morning with a Mass celebrated by Cardinal Pietro Parolin, Vatican secretary of state, in the Pauline Chapel of the Apostolic Palace.

Italy’s new prime minister, Mario Draghi, joined members of the tribunal for both the Mass and the audience with the pope; it was his first meeting with Pope Francis since becoming prime minister in mid-February.

NEXT: After Bloody Saturday, Myanmar Catholics pray for peace amid tears