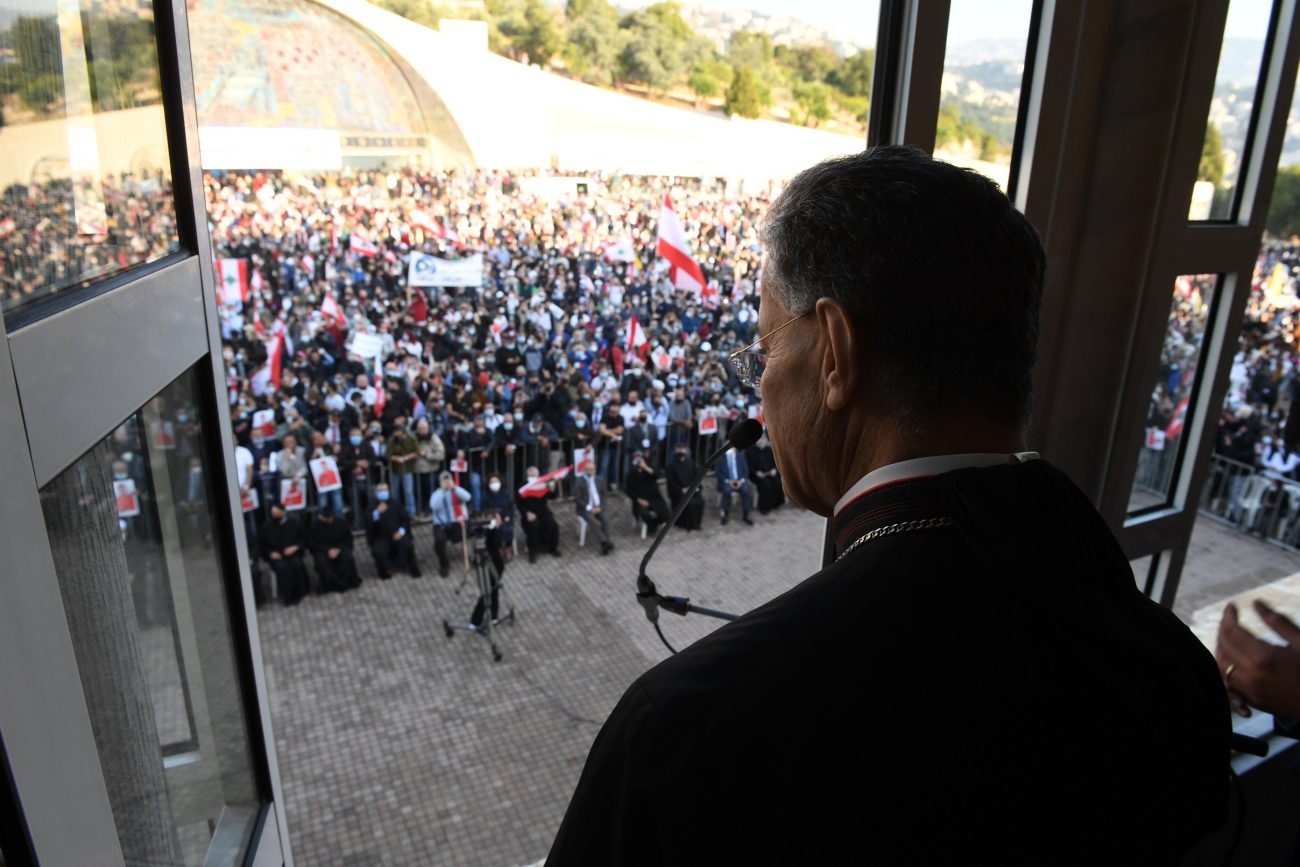 Cardinal Bechara Rai, Maronite patriarch, addresses thousands of Lebanese at Bkerke, north of Beirut, Feb. 27, 2021, as Lebanon teeters on the verge of collapse. "Do not tolerate the failure in forming a government and implementing reforms," he told them. (CNS photo/Mychel Akl, courtesy Maronite Patriarchate)

BEIRUT (CNS) — Thousands of Lebanese rallied Feb. 27 to show their support for the positions of Cardinal Bechara Rai as the country teeters on the verge of collapse from multiple crises.

The rally was at Bkerke, the seat of the Maronite Catholic Church, north of Beirut. Speaking from a window of the patriarchate, Cardinal Rai, Maronite patriarch, told the crowd: “You have come from all over Lebanon, of all ages, despite the dangers of the coronavirus, to support two proposals, that of neutrality and that of an international conference for Lebanon under the auspices of the U.N. You have come to ask for the salvation of Lebanon.

Muslims and Druze were among those who attended, including Sunni, Shiite and Druze sheikhs.

“Failure to respect neutrality is the sole cause of all the crises and wars that the country has gone through,” Cardinal Rai stressed.

Archbishop Paul Nabil El-Sayah, patriarchal vicar general for foreign affairs at Bkerke, who stood beside Cardinal Rai during his speech, told Catholic News Service: “Lebanon has never been in such a situation throughout its modern history. This is why the patriarch is taking such drastic measures.”

The outpouring of Lebanese people, specifically to express their solidarity with Cardinal Rai, reflects the urgency regarding Lebanon’s future. More than half of the Lebanese people now live below the poverty line, the unemployment rate exceeds 50% and the Lebanese currency has lost 80% of its value in less than a year.

Lebanon has been without a government since the previous one resigned in August, following explosions at the Beirut port that killed more than 200 people, injured thousands and left 300,000 people homeless. Political rifts have held up the formation process of a new government.

Cardinal Rai has repeatedly admonished Lebanon’s politicians for their negligence. In his speech, he said they “have not even had the audacity to sit down at the same table to resolve the current problem.”

He said Lebanon is “facing a coup situation in every sense of the word on the various fields of public life, a coup against the Lebanese society.”

He underlined that the international conference he advocates aims to “affirm the stability and identity of Lebanon, the sovereignty of its borders, and its attachment to freedom, equality and neutrality.”

Iranian-backed Hezbollah and some other political parties in Lebanon have been critical of Cardinal Rai’s proposal for an international conference, with Hezbollah leader Hassan Nasrallah saying it would open the door to foreign interference in Lebanon.

Without mentioning Hezbollah directly, Cardinal Rai alluded to the Shiite political and military group and its weapons in his speech: “There is no state with two powers within it, nor with two armies or two peoples. Any tampering with these constants threatens the unity of the state.”

The cardinal also voiced rejection of any attempt to naturalize Palestinian refugees in Lebanon and pressed for Syrian refugees to be returned to their country.

On top its population of around 4.5 million, Lebanon has absorbed approximately 1.5 million Syrian refugees and more than 400,000 Palestinian refugees, whose presence stems from the creation of Israel in 1948.

“I fully understand your screams and anger and understand your uprising and revolution,” Cardinal Rai said in his speech, referring to the mass protest movement that began in October 2019, which was later interrupted by the coronavirus pandemic.