At 105, Catholic woman beats COVID-19 with faith and a little gin 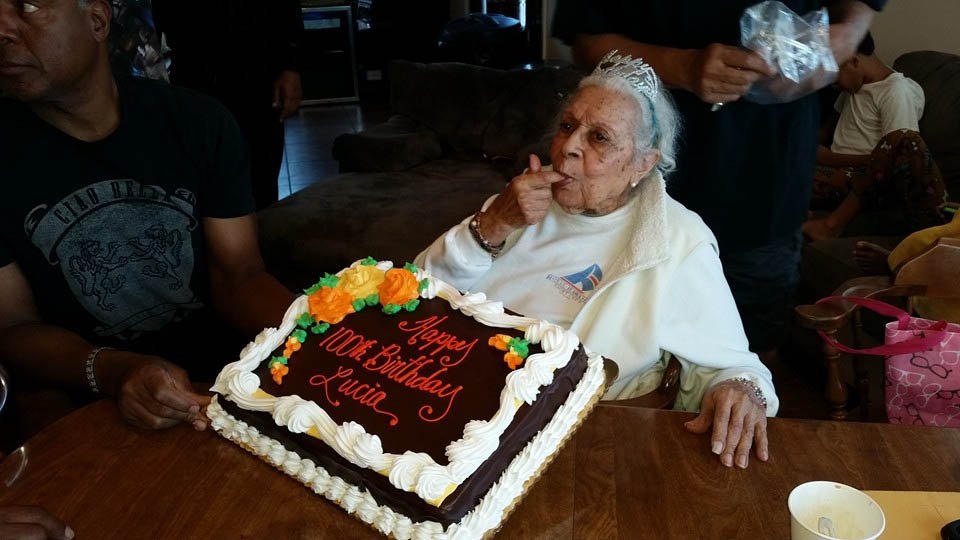 Lucia DeClerck enjoys cake on her 100th birthday Jan. 25, 2016. DeClerck recently recovered from COVID-19 after being diagnosed with the disease Jan. 25, 2021, her 105th birthday. (CNS photo/Handout via Trenton Monitor)

TRENTON, N.J. (CNS) — Lucia DeClerck has survived the 1918 influenza pandemic, two world wars, the loss of three husbands, one son and many of her physicians.

Recently added to the list: COVID-19, which she tested positive for on her 105th birthday.

“She sailed through the two-week quarantine like a champ without any symptoms,” said her granddaughter, Shawn Laws O’Neil.

The tale triggered a flurry of recent articles; her uplifting health news spread far and wide, resulting in an outpouring of greetings from around the globe — all of which reached DeClerck at her residence in Mystic Meadows Rehab and Nursing Center in Little Egg Harbor, New Jersey.

There, ensconced in a room adorned with pictures of saints and an olive wood cross from the Holy Land, she recently shared her advice for a long life: prayer without ceasing; love without constraint; abiding concern for others; an open door; no junk food; and, oh yes, nine golden raisins soaked in gin every day as a tonic.

“I found the recipe in a cathedral in Honolulu years ago, and I have followed it ever since. It’s supposed to cure anything that is wrong,” DeClerck confirmed good-naturedly.

DeClerck was born Jan. 25, 1916, in Maui, Hawaii, and at age 2, she lived through the Spanish flu. When her mother left Hawaii during hard economic times to work in Wyoming, DeClerck was cared for by her grandfather, who sent her to a convent school, where she developed a steadfast faith and enduring love of prayer. 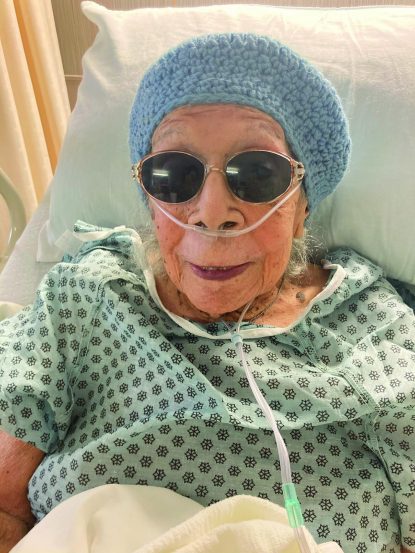 “I grew up Catholic, and I’ve always been a very strong believer,” she she told The Monitor, Trenton’s diocesan newspaper of Trenton. She added that she “doesn’t pray for anything in particular. I just pray 24/7 for the whole world.”

Her strong belief and the power of prayer carried her through the decades, from Wyoming to California and back to Hawaii. During that time, she became the mother of three sons.

DeClerck later moved to New Jersey in her late 70s to be closer to her oldest child, Henry Laws III, and his wife, Lillie Jean. She decided at age 90 to move to Stafford on the Bay Apartments in Manahawkin, a senior residence with activities and the fellowship she craved.

During her years there, she helped establish a weekly Mass for the residents. Father Nestor Chavenia, parochial vicar in St. Mary’s Parish in Barnegat, first encountered DeClerck when she was a parishioner there.

He remembers meeting DeClerck when she introduced herself to him in 2012 saying: “I am the oldest person here. You can consider me your grandma.”

They exchanged the first of countless hugs, he said, and bonded during the years she was a parishioner.

“She is a very lovely and beautiful lady” of great faith, said Father Chavenia, who worked with parishioners and friends to arrange a papal blessing for DeClerck’s 100th birthday.

The first blessing, he recalled, was presented during a large celebration arranged by family members and attended by parishioners and friends. A papal blessing is usually handwritten in calligraphy on parchment.

He also arranged a blessing for DeClerck’s 105th birthday but noted he couldn’t present it in person because of COVID-19 safety regulations.

“I had to put it in a box for her,” the priest said, adding that he is looking for a beautiful frame for when he is able to see her again.

He is hoping that will be sometime soon.

About four years ago, DeClerck transferred from the senior residence to Mystic Meadows for rehab after sustaining a fall, her son Henry said. She liked it so much, she decided to stay.

Administrator Michael Neiman, who is Jewish, said the affection is mutual. “What is amazing is that she is so positive” in her faith and that her presence acts like a magnet to others, he said.

“When we used to allow visitors, everyone would stop by her room to visit,” he said of DeClerck, who “always has a rosary in her hand.”

Neiman said she gives strength to the staff and residents. “She brings blessings to everyone and prays with all who have need of it.”

“You feel the extra goodness in her,” he said, adding that he goes in to pray with her at least once a day, and if he’s feeling down, he goes twice.

Rogers writes for The Monitor, newspaper of the Diocese of Trenton.

NEXT: Human rights rejected when elderly are cast aside, says U.N. nuncio