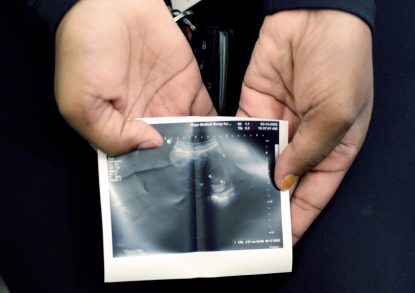 A patient from Texas holds a sonogram that she received at the Hope Medical Group for Women in Shreveport, La., Feb. 13, 2020. The Texas Senate approved six abortion bills March 30, 2021, including one proposal that would ban the procedure all together. (CNS photo/Lila Engelbrecht, Reuters)

“These include our top priorities, the Chemical Abortion Safety Protocol, S.B. 394, and the Human Life Protection Act, S.B. 9. We have great hope that these bills, which provide further protections for women and unborn children, will become law,” she added in a message in the Texas Catholic Voice, the online news outlet of the Austin-based conference.

Now the measures must be taken up by the Texas House of Representatives.

The approved bills are:

— Heartbeat Act, S.B. 8, bans abortions after the child’s heartbeat is detectable, which could be as early as six weeks of pregnancy. The bill has an exception for medical emergencies but not for rape or incest.

— Trigger Abortion Ban Act, S.B. 9, which would outlaw most abortions and would take effect if Roe is overturned. Texas would only allow abortions if the pregnancy threatens the mother’s life.

— Regulating Abortion-Inducting Drugs Act (or Chemical Abortion Safety Protocol), S.B. 394, would prohibit chemical or “pill-induced” abortions after seven weeks. The U.S. Food and Drug Administration’s guidelines approve the use of abortion pills up to 10 weeks. The bill also would ban people from receiving abortion medication by mail.

— Stop Taxpayer-Funding of Abortion Logistical Support Act, S.B. 650, would bar local city governments from funding “logistical support” for those seeking an abortion, such as money for child care, travel to or from an abortion provider, housing, food and counseling that may encourage a women to have an abortion.

— Every Mother Matters Act, S.B. 802, would require a third party under contract with Texas Health and Human Services to offer a consultation and inform a woman seeking an abortion of available resources before she undergoes the procedure.

“Today is a proud day in the history of our great state. Texans should take immense pride in being the first state to take such bold legislative action to protect preborn children and abolish abortion,” the pro-life organization said in a statement.

Ahead of the votes, the Texas affiliate of the American Civil Liberties Union condemned the state Senate and Lt. Gov. Dan Patrick, who presides over the Senate, for considering the bills.

Patrick “continues to push his extreme agenda by forcing seven anti-abortion bills through the Texas Senate,” said Drucilla Tigner, policy and advocacy strategist for the ACLU of Texas, in a statement. “Most Texans believe abortion should be legal, yet Lt. Gov. Patrick has made banning abortion a top priority.”

Tigner said the Senate “should stop peddling” what she called Patrick’s “extreme agenda” and “instead focus on the real crises facing Texans.”

NEXT: At 105, Catholic woman beats COVID-19 with faith and a little gin