Catholic leaders call for end to violence against transgender people 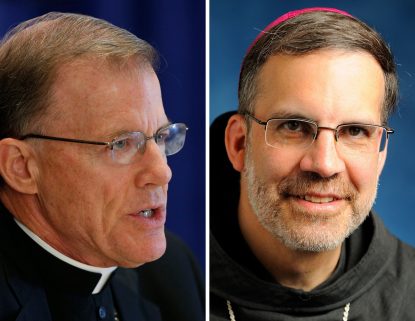 “It should alarm all Catholics that individuals who are transgender experience disproportionate rates of discrimination, harassment and violence — violence that is often fatal” and overwhelmingly affects people of color, they said in the statement.

Noting that in 2020, at least 44 people in the United States were victims “of this fatal violence,” they continued: “It is critical that we as Catholic leaders and laypeople do everything we can to prevent any further discrimination or harm. This must start with more Catholic leaders underscoring the humanity of our dear neighbors.”

“The defense of human dignity is one of our highest callings of our baptism,” the group said, “and we are empowered by the Holy Spirit to do all that is necessary to end discrimination and violence.”

The Catholic leaders joined the Human Rights Campaign Foundation in calling for an end to such violence. The  foundation is the educational arm of the nation’s largest LGBTQ civil rights organization, which is based in Washington.

The other signers are: Jesuit Father Michael Garanzini, president of the Association of Jesuit Colleges and Universities; Father Bob Bonnot, a retired priest of the Diocese of Youngstown, Ohio, and Vincentian Father Louis Arcenaeux, who are, respectively, executive director and secretary of the Association of U.S. Catholic Priests; Father Bryan Massingale, a Milwaukee archdiocesan priest, who is a theology professor at Fordham University in New York; Father Neil Pezzulo, a Glenmary Home Missioner priest, who is a Tennessee pastor; Franciscan Father Daniel P. Horan, professor of spirituality at the Catholic Theological Union in Chicago; and Tom Chabollah, president of the Jesuit Volunteer Corps.

The two organizations that signed on were the Association of U.S. Catholic Priests and the Jesuit Volunteer Corps.

The Catholic leaders quoted Pope Francis’ encyclical “Fratelli Tutti, on Fraternity and Social Friendship”: “We cannot be indifferent to suffering; we cannot allow anyone to go through life as an outcast. Instead we should feel indignant, challenged to emerge from our comfortable isolation and to be changed by our contact with human suffering.”

“It is our Catholic duty to affirm the dignity of transgender people and to defend them from harm,” the group said in its statement

“St. Bonaventure wrote that ‘we are led to contemplate God in (all creation),’ This is no less true of our transgender siblings,” the Catholic leaders said.

“Transgender people have always been members of our local parishes and the witness of their lives has leads us to greater contemplation of God and the mystery of our faith,” they said. “To our transgender siblings, may you always know that the image of God resides in you, and that God loves you.”

In March, according to a story in America magazine, Bishop Stowe expressed his support for the Equality Act, which would amend the Civil Rights Act of 1964 to prohibit discrimination on the basis of sexual orientation and gender identity in employment, housing, public accommodations, public education, federal funding, the credit system and jury duty.

“How can we take a position against equality?” the bishop asked in a letter to Sens. Dick Durbin, D-Ill., and Chuck Grassley, R-Iowa, the chair and ranking member, respectively, of the U.S. Senate Judiciary Committee.

The committee has begun hearings on the measure, which the House of Representatives passed Feb. 25 in a 224-206 vote.

“LGBTQ people reflect the image of likeness of God, just as anyone else, and so it is our duty to love and defend them,” Bishop Stowe wrote. “As a Catholic bishop, I hate to see any form of harmful discrimination protected by law and it is consistent with our teaching to ensure that LGBTQ people have the protection they need.”

Opponents of the Equality Act argue the bill is too broad and threatens religious liberty.

Ahead of the House vote, the chairmen of five U.S. bishops’ committees wrote a Feb. 23 letter to all members of the House saying its mandates will “discriminate against people of faith” by adversely affecting charities and their beneficiaries, conscience rights, women’s sports “and sex-specific facilities.”

Supporters of a compromise measure called the Fairness for All Act say this proposal would establish “much-needed civil rights for LGBTQ persons” and at the same time provide “robust protections for religious freedom.” 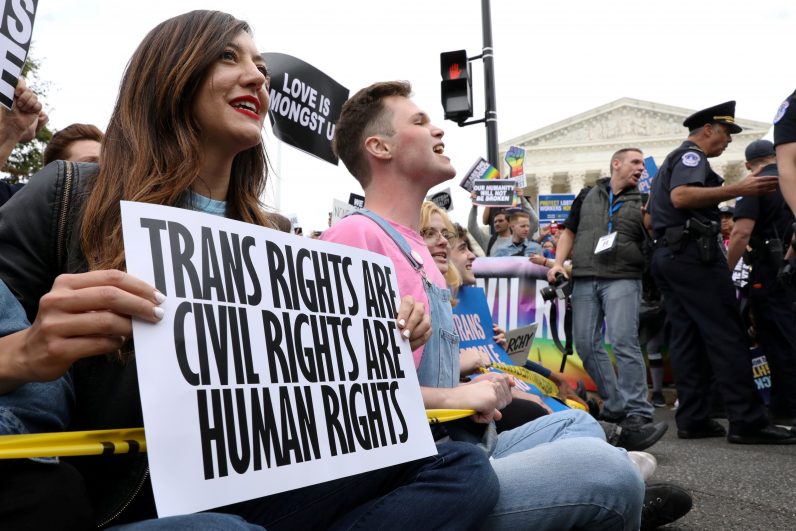 LGBTQ activists in Washington block the street outside the U.S. Supreme Court Oct. 8, 2019, during arguments in a case about workplace discrimination against LGBTQ employees and whether provisions of the Civil Rights Act of 1964 prohibit discrimination on the basis of sex covers gay and transgender employees. (CNS photo/Jonathan Ernst, Reuters)