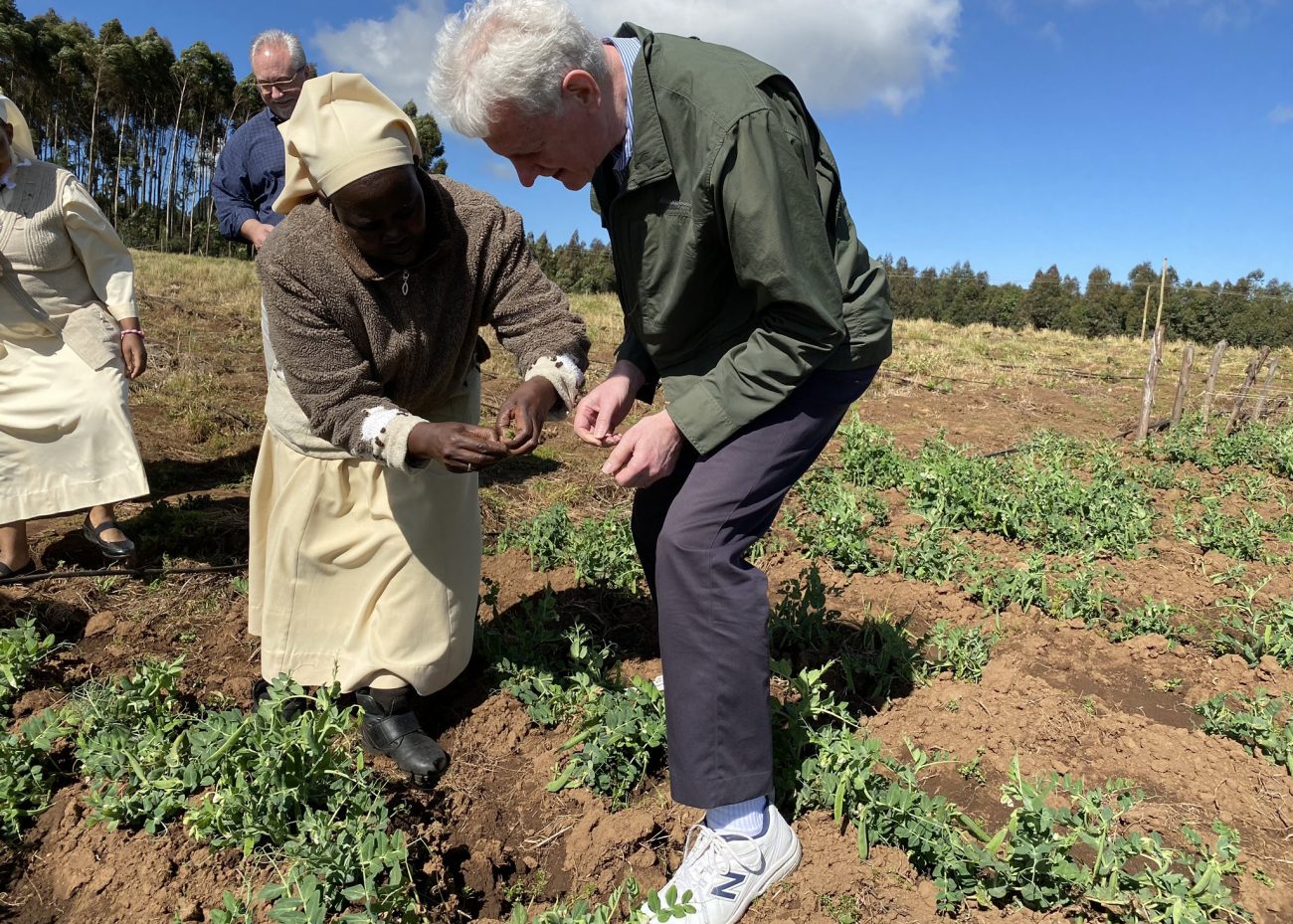 Sister Veronica, a member of the Little Sisters of St. Francis, shows a representative of the U.S. International Development Finance Corporation produce from the Divine Mercy Green Farm her order operates in Nakuru, Kenya. The farm received a startup loan of $100,000 from the Missio Invest Social Impact Fund to expand its work in the local community. (CNS photo/Handout, Missio Invest, Pontifical Missionary Societies in the United States)

(CNS) — A $20 million loan from the U.S. international development bank will allow a program started by the Pontifical Mission Societies in the United States to expand social-impact investing in enterprises operated by the Catholic Church in Africa.

The loan from the International Development Finance Corporation to the Missio Invest Social Impact Fund will be used over four years to support agricultural, health, education and financial inclusion institutions with church ties in the sub-Saharan region.

Known as MISIF, the fund will funnel money to small and medium enterprises that have no access to investments from traditional sources, Oblate Father Andrew Small, national director of the Pontifical Missions Societies, told Catholic News Service.

“No one is doing this level of funding. It’s too risky,” Father Small said.

The fund’s loans — ranging from $50,000 to $1 million — are financing church-led initiatives that large-scale investors routinely bypass, he said. Other benefits for recipients include low interest rates and no requirement for collateral.

MISIF also provides ongoing training and technical assistance throughout the life of the loan and beyond.

The people benefiting from the loans will be “agents of change” in the developing world as their income is stabilized, leading to reduced poverty, the priest said.

Through 2020, MISIF’s loans totaled nearly $4.5 million. Father Small said 98% of the portfolio is current on repayments and four loans have been completely paid off. 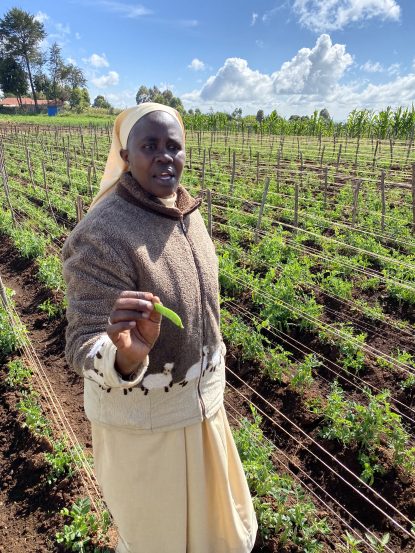 Sister Veronica, a member of the Little Sisters of St. Francis, is seen in January 2020 holding a pea pod harvested from the Divine Mercy Green Farm her order operates in Nakuru, Kenya. The farm received a startup loan of $100,000 from the Missio Invest Social Impact Fund to expand its work in the local community. (CNS photo/Handout, Missio Invest, Pontifical Missionary Societies in the United States)

Loans have been made to 38 agribusinesses, two microfinance institutions and one school spread across six countries: Kenya, Malawi, Nigeria, Tanzania, Uganda and Zambia. Borrowers have included congregations of women and men religious and priests, dioceses, seminaries, financial institutions and parishes.

“We started with agriculture because it has the biggest payoff in terms of reduced poverty,” Father Small said, adding that a wider array of health care, education and financial institutions will be sought as the loan program expands.

A school expansion in northern Tanzania for Masai children, a coffee farm in Kenya and a church-based financial institution in Nigeria have been among the early participants in the loan program.

Overall, the enterprises receiving loans have provided 2,000 jobs and $3 million in income to local economies and trained 4,500 farmers in sustainable practices in farm management, according to Missio Invest.

Father Small said the $20 million U.S. loan will allow MISIF to reach hundreds of other church-based enterprises in up to a dozen more countries. The loan must be paid back, with interest, usually within six years.

MISIF was created in 2019 by Missio Invest, which the Pontifical Mission Societies formed in 2014 to work with church-owned enterprises.

The philosophy behind forming the loan program is based on connecting investors with communities that are carrying out the missionary work of the church as envisioned by Pope Francis, Father Small said.

The priest originally set out to establish such a fund through which investors would provide “real money” to grassroots enterprises working in local communities rather than depending on donors who contribute from their pool of earnings obtained through traditional high rate-of-return investment tools.

Such social-impact investing will foster what Father Small described as more sustainable development and lead to more long-lasting relationships that the pope has encouraged the church to initiate and maintain.

“Unless we build meaningful relationships based not on vague notions of concern and donations but of concrete and identifiable forms of mutual concern, then we will continue to stifle the agency of the poor,” he said.

He compared the thinking behind MISIF to Jesus’ parable of the widow’s mite in which the elderly woman’s small donation is described as greater than any donation from the rich person who contributes from their excess holdings.

“It’s about giving until it really matters to you, until it makes a difference to your own well-being,” he explained. “The widow is expressing that she feels dependent on God and others for her future well-being. Unless we do that with the massive investment portfolios that we have amassed, it’s hard to see how we create the type of interdependence and unity God offers for our happiness.”

Church-based investors in MISIF include the Sisters of St. Louis; the U.S. Midwest province of the Society of Jesus; the Missionary Oblates of Mary Immaculate; the archdioceses of Milwaukee and Miami; the Royal English College of St. Alban in Spain; the Vatican Congregation for the Evangelization of Peoples; and the Pontifical Missionary Societies of the U.S.

Father Small said he sees the program expanding to South Asia by 2025 as new investors join MISIF. Projections call for loans to approach $80 million by 2030.

“We’ve got to ask how we can reconceive our interdependence in a way that we lay claim to a legitimate future together because we need each other in the future as we do today. I think the pandemic has shown us that,” the priest said.

“If we can share our bank balance as well as profits, we’re going to get closer to an interdependent world.”