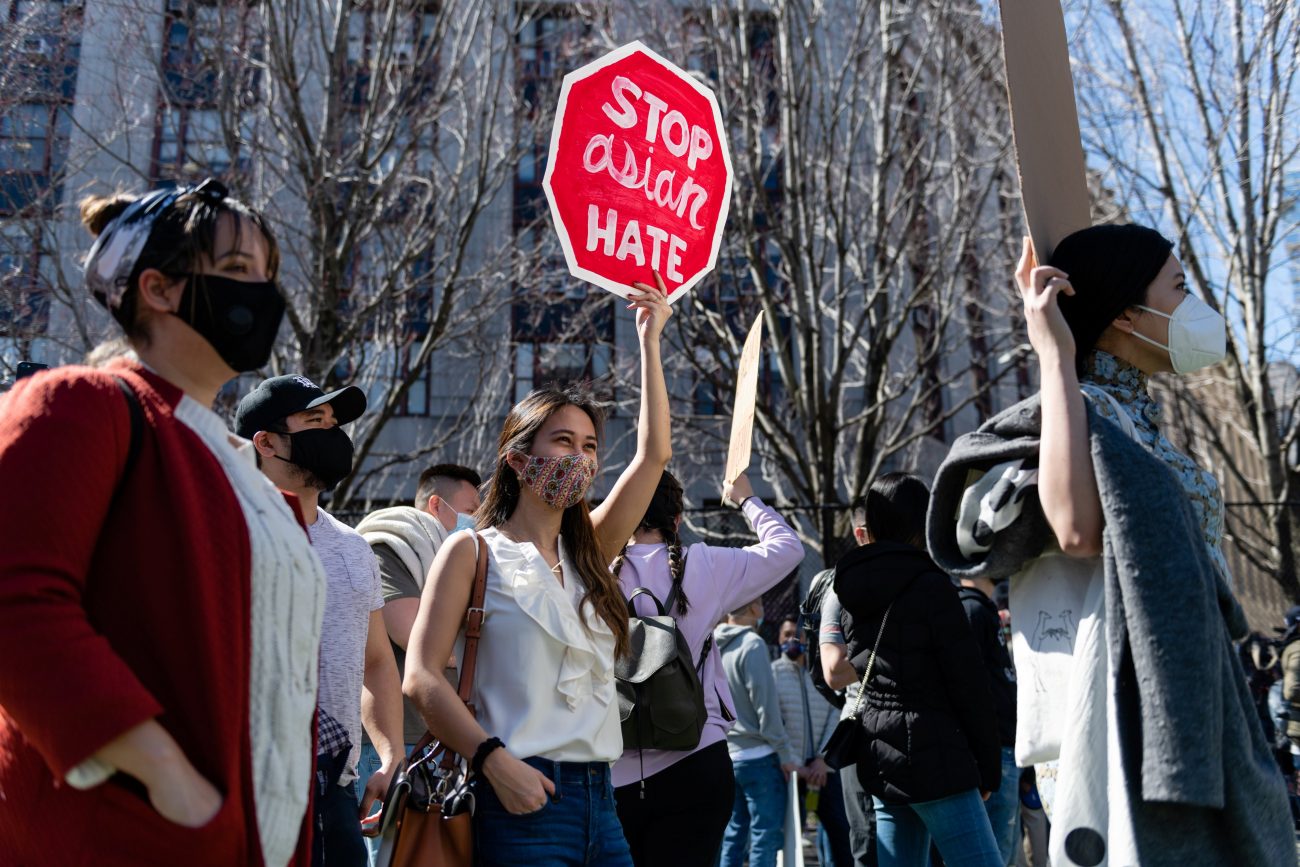 People in New York City are seen during a Rally Against Hate March 21, 2021, to end discrimination against Asian Americans and Pacific Islanders. President Joe Biden March 30 announced plans to crack down on attacks against Asian Americans and Pacific Islanders, including a review of how the Department of Justice can bolster its efforts to track and prosecute hate crimes. (CNS photo/Eric Lee, Reuters)

“We call on communities to engage in peaceful dialogue at the local and national levels to address prejudice and anti-Asian bias. We stand for the peaceful co-existence of all peoples, we pray for compassion and love, and work toward healing and unity,” said a March 31 statement from the leaders of 16 groups representing Korean, Chinese, Indonesian, Filipino, Vietnamese, Hmong, Burmese, Indian and other Asian Catholics.

The statement was released by the Asian and Pacific Island Affairs section of the Secretariat of Cultural Diversity in the Church at the U.S. Conference of Catholic Bishops.

“The rise in violence against Asian people across the country is alarming and horrific to all people of right reason,” San Francisco Archbishop Salvatore J. Cordileone said in a March 30 statement.

He announced the archdiocese will hold an afternoon “Easter Peace Prayer Service” at St. Mary’s Cathedral on Easter Saturday, April 10.

“We will pray for an end to violence and racism particularly against Asians, for healing for our nation, and for the flourishing of peace and justice in our land,” he said.

The evening of March 31 Los Angeles Archbishop José H. Gomez planned to celebrate an outdoor “Prayer Vigil for Racial Acceptance” at Incarnation Church in Glendale, California, in solidarity with the Asian and Pacific Islander Americans. Auxiliary Bishop Alejandro “Alex” D. Aclan was to be the homilist.

“We stand in solidarity with the victims of racial violence across the United States as we uphold our commitment to the core values of Catholicism,” Bishop Aclan said in a statement. “As we mobilize the faithful to take action against racism, we take Christian love, and not political interests, as our guide.”

In a March 29 statement, Bishop Oscar Cantú of San Jose, California, said the Asian community “has been on my mind and in my prayers recently, given the disturbing rise of anti-Asian animus, prejudice, aggression and violence.”

“It is disgraceful to see this in our American society in our modern times,” the bishop said. He urged Catholics to embrace Asian Americans and Pacific Islanders, “celebrate them, and love them as brothers and sisters!”

Protests and vigils have taken place around the country to demand an end to a growing wave of anti-Asian racism and violence and to remember victims of these attacks.

Two Jesuit universities, St. Louis University and Georgetown University, have held vigils online that also included discussion on challenges faced by the Asian American and Pacific Islander communities and ways to better advocate for them.

The general council of the Dominican sisters of Adrian, Michigan, also has called for an end to the violence against these groups and urged Congress to enact strong legislation against hate crimes.

The organization Stop AAPI Hate released figures in mid-March saying it had collected reports of 3,800 hate crimes throughout the U.S. in the past year against Asian Americans and Pacific Islanders.

Some of the more known reports include general harassment in public, such as being told to “go home” or to get out of the country, at restaurants and in grocery stores.

Among the most recent attacks was a March 16 shooting spree at three spas in the metro Atlanta area left eight people dead, including six women of Asian descent. Law enforcement is looking into the mass shooting as a hate crime.

“We must support all victims of violence and stand in solidarity with those who are vulnerable in our communities,” said Atlanta Archbishop Gregory J. Hartmayer in a March 17 statement after the shooting.

Chicago Cardinal Blase J. Cupich echoed these comments in his March 18 statement about what occurred in Atlanta.

Bishop Oscar A. Solis of Salt Lake City, chairman of the USCCB’ Subcommittee on Asian and Pacific Island Affairs, also echoed the Atlanta archbishop’s call to stand in solidarity with the vulnerable in these communities.

In a March 22 statement, he said the Atlanta shootings have “prompted national dialogue on addressing anti-Asian bias that has taken the form of numerous other acts of physical violence, verbal attacks and destruction of property against those of Asian descent over the last year that have left communities across the country traumatized.”

The March 31 statement from the pastoral leaders of Asian and Pacific Islander Catholic groups said the March 16 mass shooting “deeply saddened” them and they offered their prayers “for the deceased and comfort for their families and friends.”

“We strongly stand in solidarity with our brothers and sisters during this time of hostility and violence targeting the Asian community in many parts of the country,” they said.

They pointed to Bishop Solis’ March 22 statement and noted that in May 2020, two months into the pandemic, three USCCB chairmen spoke out amid the rise of incidents of racism and xenophobia against Americans of Asian and Pacific Island heritage as a result of “fear and anxiety being fueled by the COVID-19 virus” having originated in China.

“Together with our shepherds, let us be mindful of and turn to the fundamental truth that, ‘because all humans share a common origin, they are all brothers and sisters, all equally made in the image of God. When this truth is ignored, the consequence is prejudice and fear of the other, and — all too often — hatred,'” the pastoral leaders said, quoting the bishops’ 2018 pastoral on combating racism, “Open Wide Our Hearts.”

“As Holy Mother Church celebrates the paschal solemnity of Jesus Christ — his suffering, death and resurrection — we place our hope and trust in a loving and merciful God who gave his only son, our Lord Jesus Christ, to redeem all of us from sin and death,” they added.

In San Francisco, Archbishop Cordileone noted that “brutal assaults that have been perpetrated against Asian-Americans here in San Francisco in recent days.”

“This is not San Francisco! On the contrary, our city has always been an epicenter of Asian-American culture, with recurring waves of Chinese, Filipino, Korean, Vietnamese, Japanese, South Asian, and other immigrants overcoming discrimination and hardship to contribute to the rich tapestry of this city’s life,” he said.

“In our own Catholic community we are blessed to be enriched by many vibrant Asian communities, which bring much vitality to our people’s faith lives,” Archbishop Cordileone said.

“As Catholics, we also belong to a global faith community that is the most diverse and multicultural institution in the world; and as Americans, we have a responsibility on the global stage to show respect for all people, affirming their human dignity,” he added.

“We must, then, lead by example in working toward the much spoken-of but ever elusive unity that is so needed and desired in our society right now,” he added.

Father Peter Zhai, director of Chinese ministry for the archdiocese, who is organizing the April 10 prayer service, said San Francisco’s Chinese Catholic community welcomed “this call to pray together for unity and peace and end to violence and racism.

“Our faith is strong and gives us hope we can stand together with all San Franciscans of good will for a better future,” he said.

Added Father Moisés Agudo, archdiocesan vicar for Hispanics: “A rising tide of hatred must be met with a stronger swelling of love and prayer. The Latinos of the community of the Archdiocese of San Francisco look forward to joining with San Francisco Catholics to support our archbishop in prayer for peace and unity in this city that we love.” 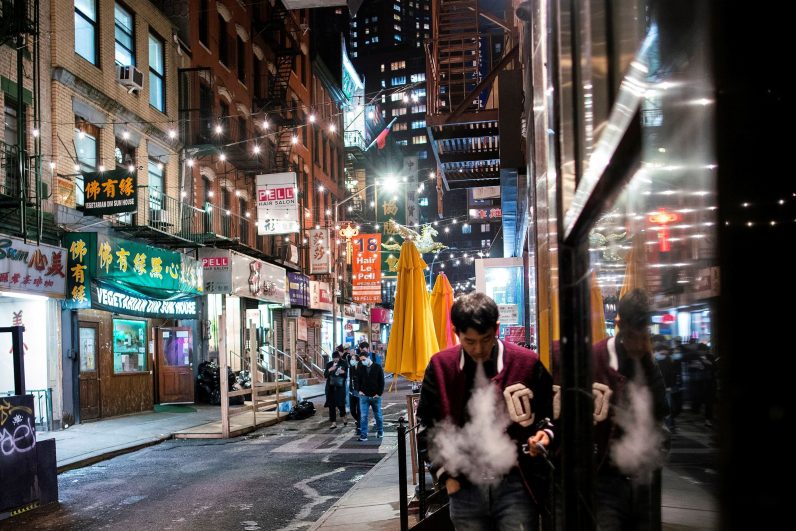 People are seen in New York City’s Chinatown March 25, 2021. President Joe Biden March 30 announced plans to crack down on attacks against Asian Americans and Pacific Islanders, including a review of how the Department of Justice can bolster its efforts to track and prosecute hate crimes. (CNS photo/Eduardo Munoz, Reuters)