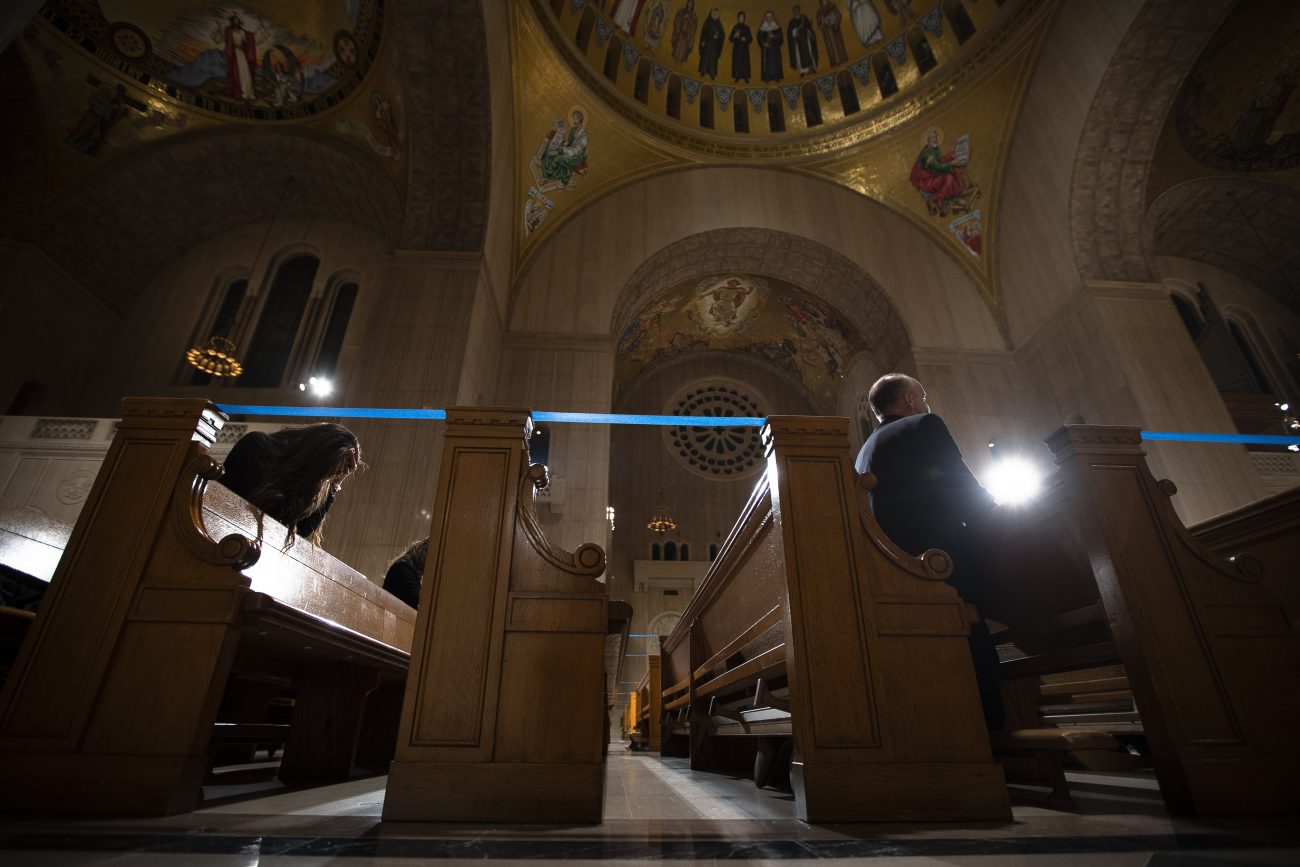 Faithful attend the opening Mass of the National Prayer Vigil for Life at the Basilica of the National Shrine of the Immaculate Conception in Washington Jan. 28, 2021, amid the coronavirus pandemic. Results of a Gallup poll released March 29 show that just 47% of U.S. adults belonged to a church, synagogue or mosque in 2020. This is the first time the percentage has dropped below 50% in Gallup's eight decades of doing this particular poll. (CNS photo/Tyler Orsburn)

(CNS) — While fewer than half of American adults responding to a recent poll said they are members of a church, synagogue or mosque, the findings do not necessarily mean that people have lost faith in God, a pair of church observers said.

Church membership in 2020 dropped to 47% of the more than 6,100 respondents to a Gallup Poll. It is the first time since the polling firm started measuring church membership in 1937 that a minority of adults said they belonged to a formal religious institution.

Back then, in the midst of the Great Depression, 73% of adults said they belonged to a church. Over the next six decades, membership levels remained steady at about 70% before a measured decline began.

The number of nonchurch members continues a downward trend that began at the turn of the 21st century.

“The poll doesn’t note that fewer than 50% of American’s don’t believe in God. It’s important to note that across society institutional belonging is not high right now,” said Timothy O’Malley, director of education at the McGrath Institute for Church Life at the University of Notre Dame.

“It’s becoming quite clear that at least church membership is not the way most Americans are practicing religiosity,” he said.

“Membership in a church is not seen as relevant or worth people’s time in a growing portion of the country,” Manion said. “It (the poll) does not say that a belief in God does not exist among these people.”

The trend of declining church membership parallels similar drop-offs in membership in clubs, organizations and professional associations in much of American society. Sociologists attribute the trend to a loss of trust in institutions, politics and even in business.

The poll highlights the trend in declining church membership across the Catholic Church and Protestant denominations. However, Catholic membership is falling faster, according to poll results.

The poll’s findings show that the number of Catholics belonging to a parish dropped from 76% in 2000 to 58% in 2020. Among Protestants, the membership decline in the same period was smaller — from 73% to 64%.

Gallup said it did not have enough data on other religious denominations to adequately analyze membership trends.

Manion noted that the poll showed the Catholic falloff in membership has accelerated since 2010, when 73% of Catholics said they still belonged to a parish.

The numbers point to the necessity for a deep look by faith leaders everywhere at how they are meeting the spiritual and communal needs of people.

“The challenge for any religious institution,” Manion said, “is to answer the question: ‘If we want people to be members, what is it that we’re providing for them that will want to make them a member?'”

O’Malley found the rapid decline in membership among younger adults, particularly those born from 1981 to 1996 significant. The poll found that 36% of people in that age group, commonly known as Generation Y, belong to a church. It is the smallest percentage by far of any age group.

However, he said, it does not mean that people in that age group have no sense of faith.

Gallup attributed the decline in church membership largely to two factors. The first relates to the growing number of Americans who expressed no religious preference. In 2000, 8% of respondents said they did not identify with any religion; in 2020 it was 21%.

The second is the falloff in church membership even among those respondents who have a religious preference went from 73% in 2000 to 60% last year.

The poll results were obtained in telephone calls to 6,117 adults from 2018 to 2020 with a margin of error of plus or minus 2 percentage points.

In response to the findings, Villanova’s Manion and Notre Dame’s O’Malley suggested the Catholic Church in particular begin to look for creative ways to bring alive Pope Francis’ invitation to people of faith to reach out to others one by one in an effort to build community and trust.

“Pope Francis is talking about a missionary option for the church. That means going into spaces that we have not traditionally hung out in,” O’Malley said. He called for a “public Catholicism” that finds laypeople transforming their neighborhoods through kindness and by creating a culture of belonging.

Manion expressed similar ideas, saying it will be the work of individuals, rather than the institutional church, that will create goodwill and new friendships.

He also suggested that Catholic officials focus on building community and a sense of belonging as a way to attract people, restore trust and renew church life coming out of the coronavirus pandemic.

“The one-to-one individual credibility is where relationships can be repaired,” he said. “It’s a trickle that leads to a bigger conversation.”