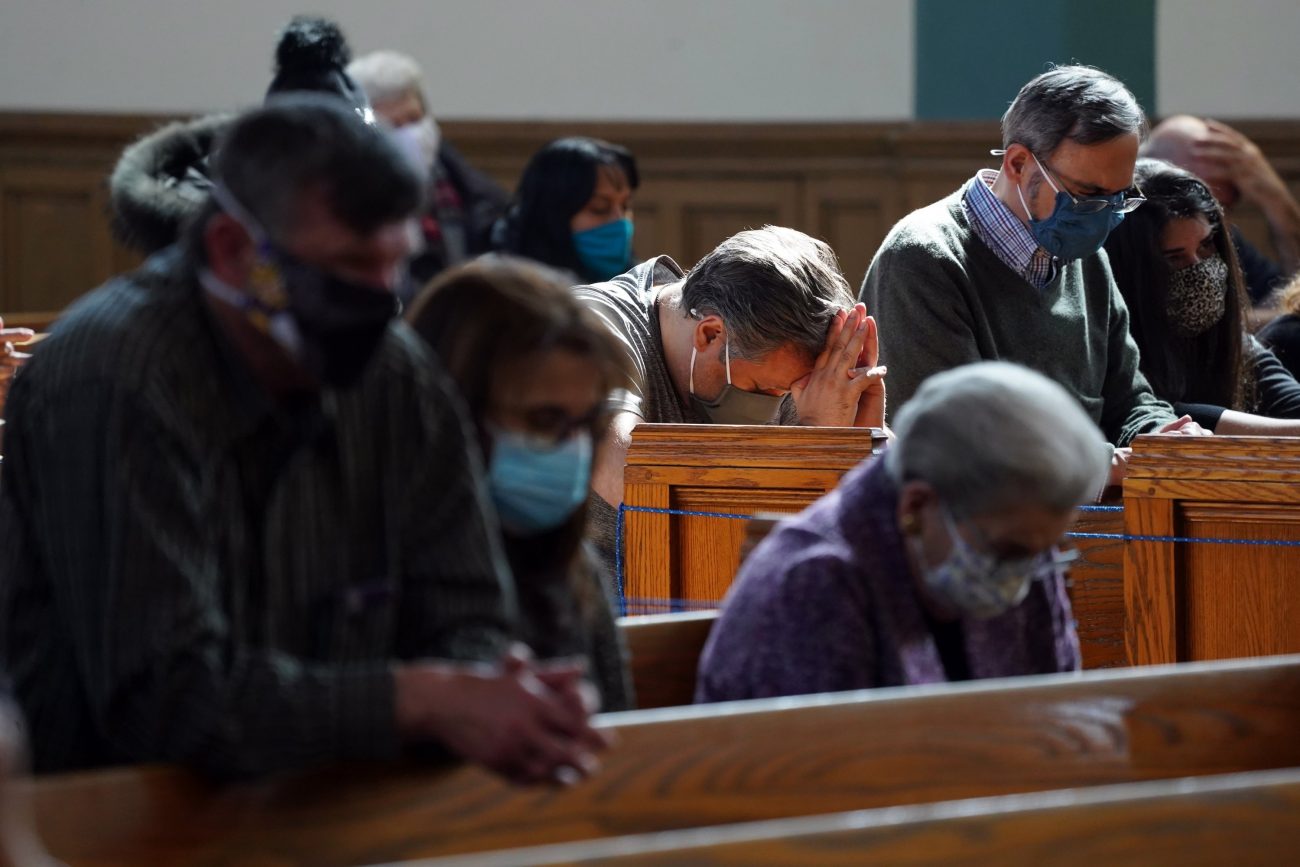 Worshippers pray during a bilingual memorial Mass March 13, 2021, for parishioners who have died from COVID-19 at St. John-Visitation Church in the Bronx borough of New York. The Centers for Disease Control and Prevention announced April 27 that fully vaccinated people wearing masks can safely attend indoor worship services. (CNS photo/Gregory A. Shemitz)

WASHINGTON (CNS) — When the director of the Centers for Disease Control and Prevention said April 27 that fully vaccinated people who wear masks can safely attend many indoor events such as worship services, the announcement likely did not catch many Catholics by surprise.

That’s because most Catholic parishes nationwide have been having in-person indoor Masses since last summer, although often with limited congregation sizes requiring parishioners to sign up in advance.

The setup of these Masses varies in each diocese and even at different parishes within a diocese. Some parishes are still following strict protocols; others are not requiring masks indoors, and some are offering indoor and outdoor Masses.

Parishes are also following state and county health guidelines that determine how many people may attend indoor services.

At the beginning of the pandemic, most bishops issued a dispensation from the obligation to attend Sunday Mass, but in recent months a growing number of bishops have lifted that dispensation. Last fall, Bishop David L. Ricken of Green Bay, Wisconsin, lifted the dispensation, then reinstated it two weeks later because of the rising number of COVID-19 cases in the region.

Also, across the country, many parishes that quickly figured out how to livestream their Masses last spring are now continuing to provide this service, even as their congregations are starting to return.

A Catholic News Service reporter’s unofficial Twitter poll April 28 showed a mixed response about what Catholics planned to do for Sunday Mass the weekend after the green light for indoor worship was given — for those who are masked and vaccinated — by Dr. Rochelle Walensky, CDC director.

Most said they would attend Mass in person, and the next largest number of respondents said they had barely stopped going to Sunday Masses in person this past year.

Those who gave specific responses offered a variety of reactions, from saying their parish does a good job with safety protocols to not feeling comfortable going to Mass at their parish, since face masks are not required. One woman said her parish offers indoor, outdoor and livestream Masses and, for now, she would continue attending the outdoor services.

John Kraemer, who attends Christ the Good Shepherd Parish in Saginaw, Michigan, said that as soon as churches reopened, he was “one of the first ones in the door.”

“For someone who has a disability, it was important for me to attend no matter what. So, in that respect, other than when the parishes were closed, I never stopped going. Masked or otherwise,” he said in an email.

A Twitter response from the Hawaii Catholic Herald, archdiocesan newspaper of Honolulu, said: “We’ve been back to in-person attendance for a while now here in Hawaii. Bishop Silva actually lifted the dispensation on attending Mass as of Easter Sunday, so you have to attend unless you have just cause, like a health complication.”

Bishop Larry R. Silva wasn’t the only bishop to lift the Mass dispensation originally made at the height of the COVID-19 pandemic. Dioceses in Texas, South Dakota and Wisconsin began telling Catholics this past fall that they were once again obligated to attend Sunday Mass unless they felt they could not attend because of health reasons or concerns.

The trend continued in February when Detroit Archbishop Allen H. Vigneron announced he was lifting the dispensation for Mass on Sundays and holy days effective March 13. He said he would grant “particular dispensations” to those in need, including those at high risk of COVID-19.

Churches in several states this past year defended their right to worship indoors or with fewer restrictions in court battles that ultimately were resolved by the Supreme Court.

“Banning indoor worship and yet allowing people to gather at airports, personal services establishments and retail shopping is unconstitutional — and the Supreme Court has said so several times,” said Bishop Oscar Cantú of San Jose, the diocese in the county where the ban had been in effect.

He said in a statement that he was grateful for the work of these churches in the county and their “efforts to uphold our right to worship” as guaranteed by the U.S. Constitution.

“As we continue to protect the most vulnerable among us, the dispensation from the obligation to attend Sunday Mass is still in effect. Parishes will continue to offer outdoor and livestream Masses wherever possible for parishioners who are vulnerable to COVID-19 or hesitant about indoor worship,” he added.

He also urged the Catholic community to “move forward in hope, continuing all necessary safety precautions” and receiving the COVID-19 vaccine when they could.