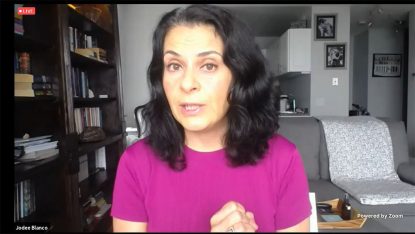 WASHINGTON (CNS) — Bullying in schools is nothing new, but in the COVID-19 era, it has taken different forms.

And at this year’s annual National Catholic Educational Association convention, Catholic educators, who have already adapted to new ways of teaching and monitoring safety protocols this past year, were advised to be on the lookout for new ways of bullying they may have already witnessed.

Jodee Blanco, an anti-bullying advocate and author who has written about her own experience of being bullied and has been a repeat NCEA workshop presenter, told participants April 8 that there has been a “deeper edge to the meanness and nastiness” this year.

During a workshop in the convention’s virtual format, she said that before the pandemic, she would go to schools and address students in gyms about bullying, stressing it crosses the line from just joking around if behaviors are unkind and people are excluded.

Now, she isn’t visiting schools, but she is still getting calls from principals of public and Catholic schools about bullying — including just days before her presentation — who are talking about the rise in students’ sarcasm, criticism of each other and ready to “jump at the chance to make a snarky comment.”

This has been particularly true among middle school students toward each other and their teachers. School administrators also have seen an uptick in parents engaging in bullying on social media.

“Kids are like sponges,” she said, noting they are “absorbing an edge at home and in school” in this unusual time and sometimes they act out on that.

She advised principals and teachers to “push their compassion button,” cut themselves some slack and also try to understand where some of this negative behavior is coming from.

For the schools with in-person learning, a new challenge has come from the face masks where students see only each other’s eyes.

Before the pandemic, she said, one of the meanest ways students could be bullied was just from the look of disgust another student might give. The look is “even more pronounced now” with the dynamic of face masks.

A new challenge for teachers, she said, is that their humanity shows even more now, particularly if they lack technological savvy in their Zoom classes. Students pick up on that and make fun of it.

Students might feel more free to demonstrate this kind of mocking, she said, since many parents have acknowledged “letting things slide” this year, being less restrictive with their children amid the pandemic and also being edgy themselves with everything they are dealing with.

For in-person schools, which is about 90% of Catholic schools in the U.S., according to the NCEA, Blanco urged teachers to try not to send disruptive students to the principal’s office which she likened to “giving away your power.” Instead, she suggested redirecting these students, giving them a task to do, even one that might take them outside the classroom.

And for online bullying, from students or parents, she urged teachers never to respond publicly but always in a private message or conversation.

She also had advice for how students might help their parents behave better online, since she said there has been an “uptick in parents being snarky in social media.” Blanco suggested teachers help students come up with a “code of mindfulness” for social media that hopefully they could in turn bring home.

In the workshop’s chat section, some educators echoed these observations, saying they have seen examples of this bullying during the year. Others showed they need help in responding to this trend, requesting links for suggested responses.

PREVIOUS: Man with Down syndrome promotes jobs for ‘friends like me’

NEXT: Nations not working together seen as biggest failure of pandemic