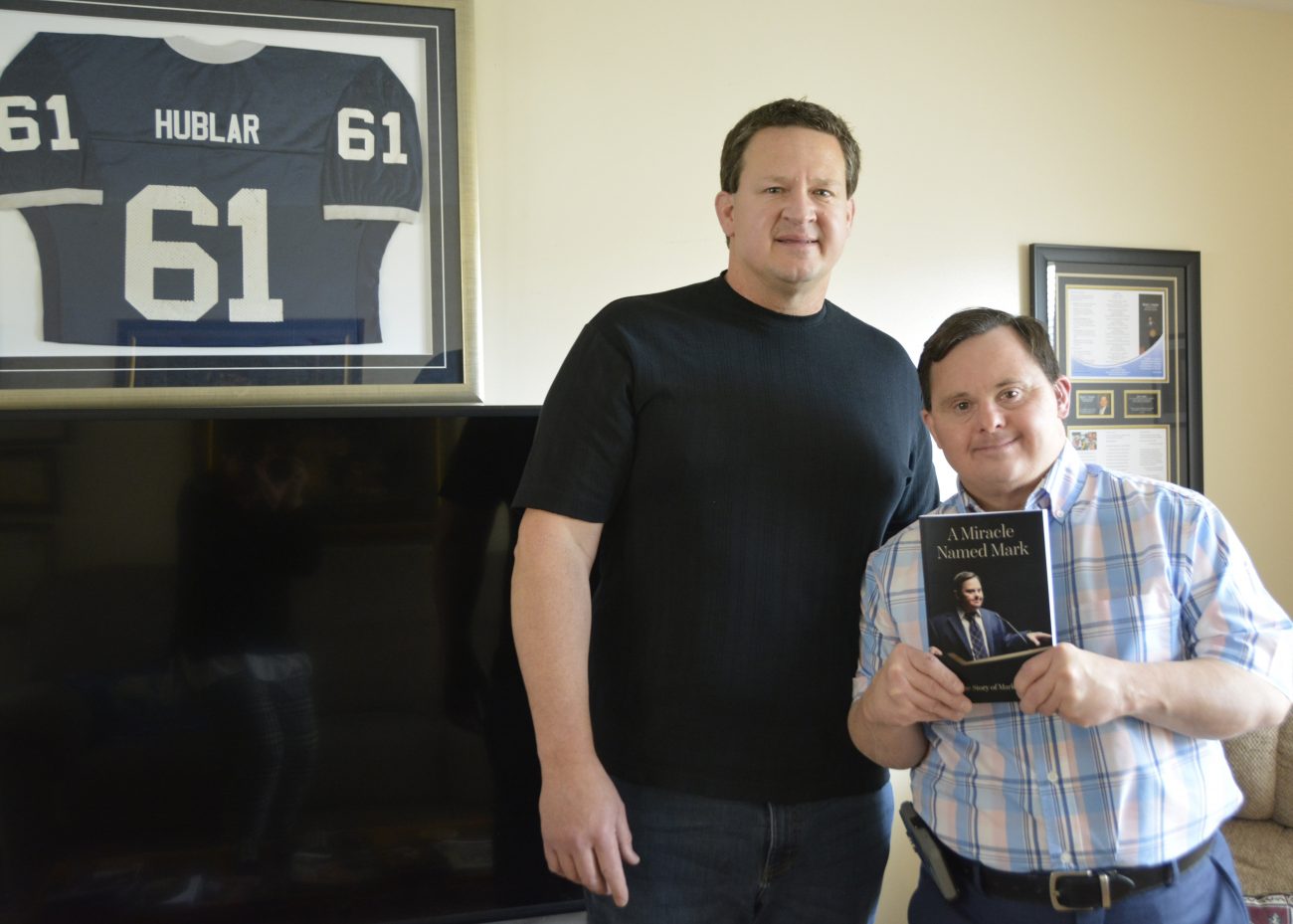 Brothers Greg and Mark Hublar pose for a photo with their book "A Miracle Named Mark" Feb. 24, 2021. (CNS photo/Natalie Hoefer, The Criterion)

NEW ALBANY, Ind. (CNS) — Mark Hublar is a people person. The fact radiates in his greeting — the friendly smile, the extended hand, the confident eye contact and the chatter.

“There are two things you should know about me,” said Hublar, 56. “I love people and I love to talk.”

The member of Our Lady of Perpetual Help Parish in New Albany, Indiana combined those traits to develop a career he is passionate about: as a motivational speaker advocating for employment of those with disabilities.

Which leads to a third fact about him that people should know: Hublar has Down syndrome.

“He never let his disability hold him back,” said Mark’s brother and fellow parishioner, Greg Hublar. “Everything he’s accomplished is a miracle.”

Accomplishments like graduating from high school, living and supporting himself independently, earning a degree in public speaking and, with the help of his family, creating his own business called Mark Hublar Speaks.

His job has taken him around the country. He has spoken with corporate and nonprofit leaders, employers and members of a congressional committee in Washington. He has met a long list of politicians, athletes and celebrities.

“I want to see my people go into communities and get real jobs with real pay, equal pay,” Mark said.

He also wants people to know that those with and without disabilities “are different, but the same.” 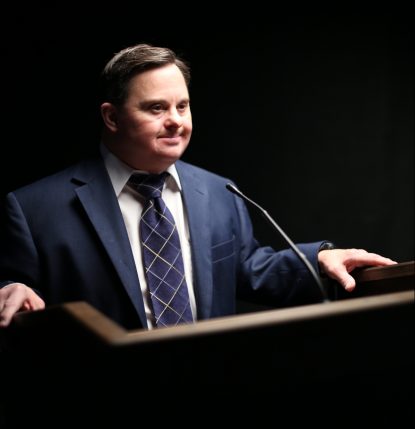 Mark Hublar of New Albany, Ind., poses in front of a podium as he would at any of his public speaking events to advocate for employment of those with disabilities and to share the message that “we’re all different, but the same.” (CNS photo/The Marketing Company via The Criterion)

It’s a role made possible through faith, a loving family — and a crucial decision Mark’s parents made after his birth.

When Mark was born in 1964, his parents were told he had mongolism — the term then used for Down syndrome. The doctor said their son would live a vegetative life. As most doctors did in such cases then, he advised them to send Mark to an institution.

Al and Linda Hublar’s response was immediate. They were not putting him in an institution. They were taking him home.

While they were firm in their decision, Al and Linda, both now 80 and members of Our Lady of Perpetual Help, knew they would have to depend on God to make it work.

Al remembered praying: “God, I don’t know what’s going to happen. Please just allow him to have enough intelligence to know and love and serve you.”

One day years later, Mark heard his father swear and told him: “‘You know God can hear every word you say. It’s not worth it,'” Al recalled, saying he knew then that his prayer had been answered.

The Hublars decided to raise Mark no differently than their toddler, Mike, and two other sons, Greg and Todd, born after Mark.

“He had his chores like us, he was expected to behave,” said Greg, 52. “There were no special passes because he had a disability.

“And we played as hard with him as we did each other,” from tackle football to wrestling to “parachuting” from a window — one of many tales shared by Greg in his recently published book, “A Miracle Named Mark” about his brother’s challenges and accomplishments.

“Because of the way we were raised, I didn’t even know he had Down syndrome until I was in fifth grade,” Greg told The Criterion, newspaper of the Archdiocese of Indianapolis.

Mark wanted to do everything his brothers did. Being “just like my brothers” became a source of motivation that drove him to graduate from high school, find work and live on his own.

In 2016, he earned a three-year degree in public speaking from a community college.

A series of unrelated events that followed led to Mark’s true calling.

First, he was asked to speak about having Down syndrome with students at Our Lady of Perpetual Help School during Disabilities Awareness Week, and he was a natural.

A few years later, Mark took a job stocking shelves at Walmart. After only three months, Mark’s boss called Al to say the job wasn’t working out — Mark spent too much time talking.

“I was only kidding when I asked him, ‘Well, can you find him a job where he gets paid to talk?'” Al recalled asking, and the boss said yes.

Mark became a Walmart greeter and was so good at this job for five years that a local TV news station did a story on him when he had to retire for health reasons.

At one point during this time, his dad asked Mark what he thought his purpose was in life. His son thought about this and about two weeks later said it was “to help friends like me to have a full life and real jobs.”

But it would still be years before Mark’s gifts of public speaking and love of people would merge into his career as an advocate and public speaker. Once this happened, he was on a mission to share his message that those with disabilities and those without “may be different, but we’re the same.”

Since 2012, Mark has helped with initiatives led by The Arc of Indiana. The mission on its website aligns with his: to help “all people with intellectual and developmental disabilities realize their goals of living, learning, working and fully participating in the community.”

Susan Rinne heard one of Mark’s talks and was impressed years before she became co-director of Indianapolis-based group called Work to Include.

When the group launched in 2018 to promote employment for people in Indiana with disabilities, Rinne remembered Mark and hired him.

She supports him as he leads a team helping local people with disabilities identify their strengths. He and his team reach out to employers to share information about the benefits of hiring those with disabilities and to help them find such workers.

He is passionate about his vision for “my friends” who, like him, have some form of disability and wants people to understand that people with disabilities can be anything they want.

Al is a member of his son’s Work to Include team. He says after parents of children with Down syndrome hear Mark speak, they are more confident about what their children could do.

Mark’s recognition for what he has done is demonstrated in the long list of scholarships, awards and accolades he has received.

His face is on the Work to Include billboards in southern Indiana and was on the big screen in New York City’s Time’s Square, where his was one of 500 photos chosen from 3,000 worldwide submissions to appear as part of the National Down Syndrome Society’s annual video presentation in 2019.

But fame has not gone to Mark’s head. For him, it’s all part of his work to promote employment for those with disabilities and to spread his message of “different, but the same.”

“God is happy with what I’m doing,” he said, adding: “He works in heaven and I work down here.”

“A Miracle Named Mark” costs $20, 10% of which is donated to a disabilities-related charity the purchaser selects from list. To purchase a copy, visit www.markjhublarspeaks.com.

NEXT: Even bullying has changed in pandemic, says NCEA presenter