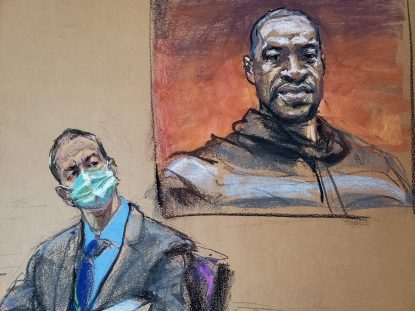 ST. PAUL, Minn. (CNS) — After a three-week trial, former Minneapolis police officer Derek Chauvin was found guilty on all three counts April 20 in the May 25, 2020, death of George Floyd.

The incident, captured on a bystanders’ video that went viral, sparked protests and riots across the Twin Cities, the nation and parts of the world.

Chauvin, who is white, was found guilty by a jury that deliberated for more than 10 hours over two days of second-degree unintentional murder, third-degree murder and second-degree manslaughter in the death of Floyd, an African American.

Just prior to the verdict being read, Minnesota’s Catholic bishops released a statement with their commitment — no matter what the jury decided — “to providing long-term leadership in eradicating structures of sin and racism in Minnesota and beyond.”

“There are no victims and no oppressors in the kingdom of God,” the statement concluded. “For our children’s sake, let us embrace our true identity, without waiting another day.”

In a separate statement after the verdict, Archbishop Bernard A. Hebda of St. Paul and Minneapolis said that Jesus calls people, though their “shared brotherhood,” to “a deeper respect for all human life.”

“We ask him to bring healing into our communities, comfort to the family of George Floyd and all who mourn, and satisfaction to those who thirst for justice,” he said.

“May the many reminders of the Lord’s loving closeness even in challenging times inspire us to treat each other with unfailing respect, to work nonviolently for the common good and to be instruments of reconciliation,” he added.

President Joe Biden called Floyd’s family after the verdict was announced. The president and Vice President Kamala Harris later remarked on the trial from the White House foyer.

Biden said the verdict could mark a step forward, but much work remains to be done to confront systemic racism, which he called “a stain on our nation’s soul.”

Floyd, 46, died while being arrested when a store clerk accused him of trying to pass a counterfeit $20 bill; he had been held to the ground for more than nine minutes by Chauvin and several other police officers. He repeatedly told the officers that he could not breathe. Chauvin’s defense attorney pointed to Floyd’s drug use and health issues as possibly contributing to his death.

Judge Peter Cahill, the trial’s judge, has yet to sentence Chauvin, 45; sentencing is expected to take place in eight weeks. After the verdict was read in the courtroom, Cahill revoked Chauvin’s bail and he was remanded into the custody of the Hennepin County Sheriff’s Office.

After court officials announced that a verdict had been reached, people gathered in Minneapolis outside the Hennepin County Government Center, which includes the courtroom where the three-week trial was held, as well as George Floyd Square, the site of Floyd’s death. As the verdict was announced, the crowd’s initial reaction was celebratory.

Closing arguments were presented April 19, and the jury deliberated that evening and part of the next day.

“It’s shocking that there could be in anybody’s heart such an absence of concern for human life,” he told The Catholic Spirit, the archdiocesan newspaper. “And listening to him (Floyd) say that he can’t breathe, or listening to him call to his mother, it’s gut wrenching. I’ve said that before, and that hasn’t really subsided. … That video is probably more devastating than anything I’ve ever seen.”

On the weekend before the trial began, the archbishop shared prayer with other faith leaders in front of the Hennepin County Government Center. As closing arguments were scheduled to begin, the archbishop held a special Mass “For the Preservation of Peace and Justice” at the Cathedral of St. Paul in St. Paul, and he urged all priests of the archdiocese to celebrate that special Mass on the same day.

That special Mass was held only eight days after 20-year-old Daunte Wright, also an African American, was killed in the Minneapolis suburb of Brooklyn Center during a traffic stop when officers found he had an outstanding warrant and he struggled to get back into his vehicle.

Police said it appeared that Brooklyn Center Police Officer Kimberly Potter, who later resigned, mistook her gun for a Taser, shooting Wright once in the chest. Potter, like Chauvin, is white. Potter, 48, has been charged with second-degree manslaughter.

At the April 19 Mass, the archbishop in his homily noted that the issues of racism, peace and justice were larger than one person can solve, but that did not mean people should do nothing.

“We can’t single-handedly force healing to those who feel the wounds of racism in our land,” the archbishop said. “We can’t bring George Floyd back to life, or Daunte Wright back to life. Does that mean we do nothing? Absolutely not.”

Catholic parishes and schools in the archdiocese responded to the protests and riots, the unease and unrest, with prayers, workshops and study groups on racism.

After Wright’s death, Father Paul Shovelain, pastor of St. John the Baptist Parish in New Brighton, Minnesota, got on his church roof and prayed a rosary he livestreamed on Facebook as he gazed at the homes and businesses, churches and schools of Brooklyn Center, only miles away.

At St. Thomas More Church in St. Paul, members of an anti-racism task force organized two hours of prayer every weekday afternoon during the Chauvin trial. The church was open from 3-5 p.m. to offer a “peaceful presence,” for people to quietly reflect and pray for peace. A similar prayer opportunity was held at St. Peter Claver Church in St. Paul on Wednesday evenings.

On April 17, Father Paul Jarvis, pastor of St. Bridget Church in north Minneapolis, and several parishioners walked the neighborhood in a group called Come Together, praying for all victims of violence.

Even before the trial began, religious and civic leaders were calling for a peaceful response to the trial and its verdict following violence and riots that erupted during protests following Floyd’s death last year on Memorial Day.

Over the course of several days and nights, rioters looted and set fire to businesses in Minneapolis and St. Paul, including a Minneapolis police headquarters building.

Protests and similar riots occurred in cities across the United States.

St. Catherine University in St. Paul announced it would be closed April 21 for a day of reflection following the verdict. In an Instagram post the university encouraged students and staff to reflect on the situation.

“We pray for peace, for strength and for love of the dear neighbor,” the post said.

Ruff is news editor and Wiering is editor of The Catholic Spirit, newspaper of the Archdiocese of St. Paul and Minneapolis.

NEXT: Catholic leaders see Chauvin verdict as a call for more action