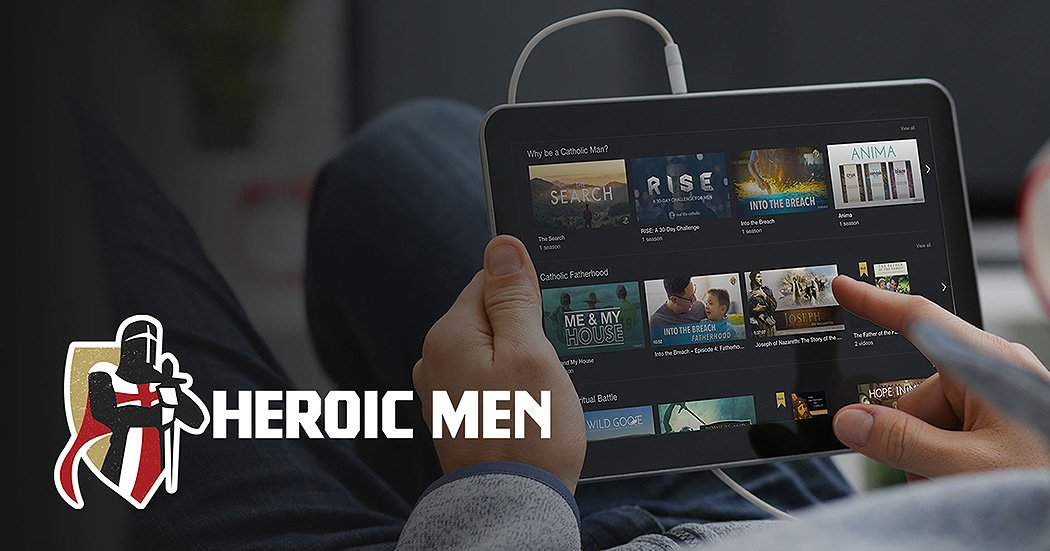 This is an image from the Heroic Men website, a "100% Catholic" streaming platform for films, TV shows, documentaries and short films aimed at helping Catholic men strengthen their faith. (CNS photo/courtesy Heroic Men)

Launched last October, Heroic Men wants to serve as the go-to site for ministries for Catholic men, according to one of its co-founders, Robert Tunmire.

Tunmire, who left a career in the franchising field after 44 years to help assemble Heroic Men and its principal sponsor, the Catholic Men’s Leadership Alliance, told Catholic News Service in an April 7 phone interview that the principles of franchising can be applied when reaching out to men.

He said he expects it to be a long haul. When the group started, the goal was to have men’s ministries in all dioceses in the United States and Canada, but were aware of such ministries existing in only 25% of them. By the time 2021 is over, Tunmire believes it will get to the 35% mark.

Recruitment has gone “very well,” Tunmire said. “We actually sent a letter out in mid-February to all the bishops in North America” focusing on Heroic Men and Catholic lay leadership, “and it’s been an incredible response from the bishops. They’ve been referring us to the head of evangelization, family life, or a deacon in the diocese. It’s been a very good response.”

Moreover, he noted, “none of the responses have been, ‘No, we don’t really need anything like that here.'”

The Catholic Men’s Leadership Alliance is formed along the same geographic regions used by the U.S. Conference of Catholic Bishops, with a 15th region for Canada. It says its mission is to “equip Catholic clergy and lay leaders to better evangelize, instruct and disciple Catholic men to a deeper relationship with Christ” and have “a vibrant men’s ministry” in every diocese.

“We’re building out an army of men, gathering up state leaders now, with the objective of having a couple of diocesan leaders in every diocese in North America,” Tunmire told CNS.

Part of the effort is “how to get parish groups going, and how to put on a conference in a diocese,” he said. But “after working on this for a year and a half, two years, we realized we needed to use technology more to reach our men.”

Alliance leaders reached out to Tim Gray of the Augustine Institute in Denver, and they collaborated on supplying a host of catechetical materials that can be viewed online. “You need boots on the ground, but you also need to use technology,” Tunmire said. And thus was Heroic Men born.

He said, “One of the things is that when men start going to a local parish-based ministry to men and they don’t know how to do it,” so the alliance and Heroic Men can give them a starting point.

Tunmire said the idea is prevalent in evangelical circles; he was an evangelical before he joined the Catholic Church in 2004. He asked his diocesan bishop, then-Bishop Gregory M. Aymond of Austin, Texas, about starting a ministry to men. The prelate agreed, and in 2006 it made its debut.

“Men want to be the men that they’re called to be in God. But most men don’t know how to do that,” Tunmire told CNS. “They don’t know the resources to do that, and nobody’s engaging them to do that. Men are very easily distracted — ‘I’m busy, I don’t have time.’ We’re very good at taking all the time we want to to watch sports, but not invest in our own spiritual growth and our own Catholic faith.”

He said, “There’s not a lack of opportunity,” adding he wants to leverage the power of 13,000 permanent deacons in the United States.

“It’s just getting men to thinking about these things,” Tunmire added. “Our Catholic faith is so rich and incredible. And our men come alive in that truth, oh by golly! But someone’s got to engage them to help them come alive in that.”

PREVIOUS: Inspired by a priest in the family, a mother and daughter become Catholic

NEXT: Biden announces commission to study changes to Supreme Court