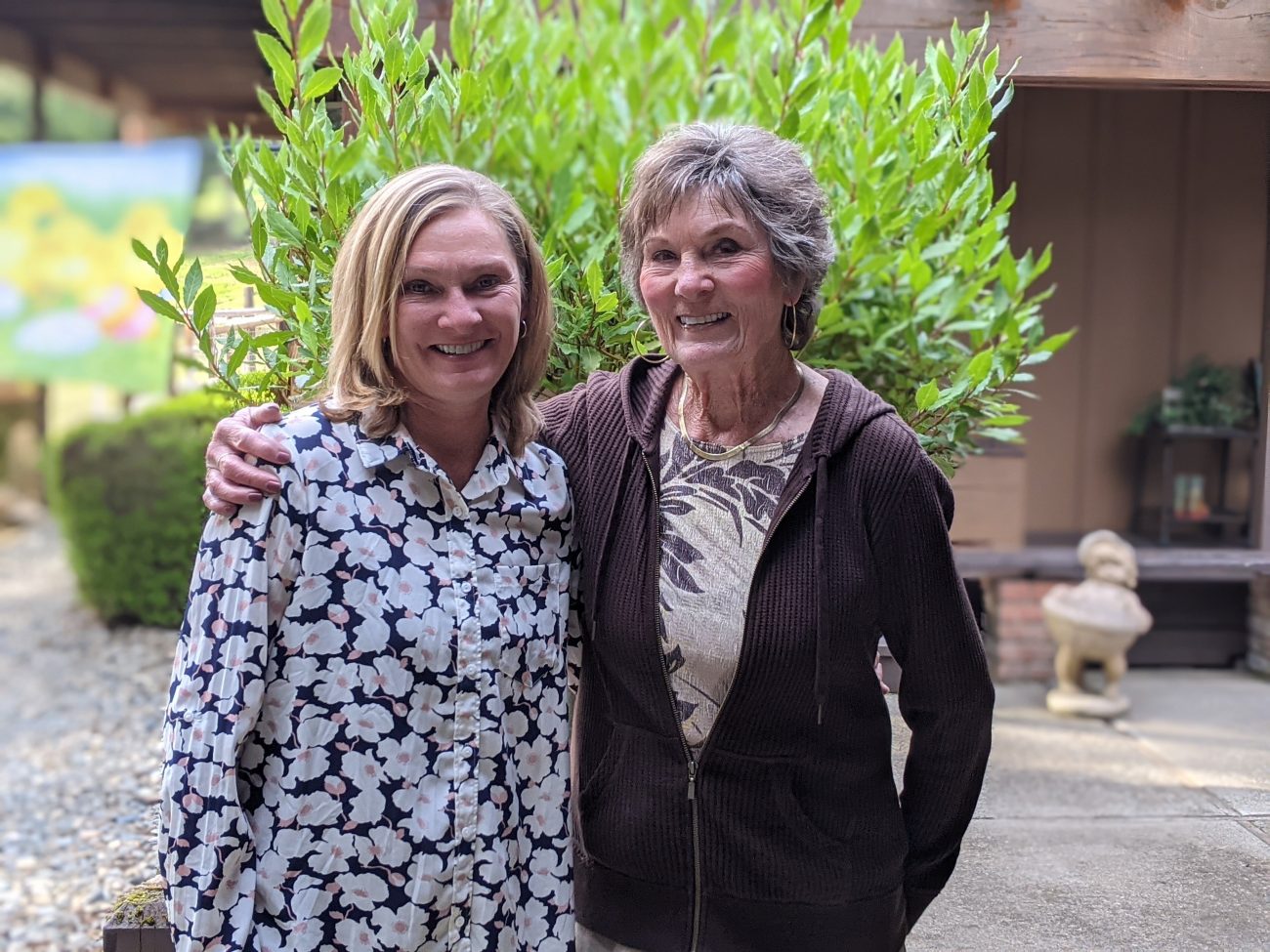 Kellie Halsted and her mother, Judy Crowe, pose for a photo before their confirmation at Sacred Heart Church in Medford, Ore., April 3, 2021. Father Brent Crowe, Kellies brother and Judy's son, is administrator of Our Lady of the Mountain Parish in nearby Ashland. (CNS photo/Courtesy Kellie Halsted via Catholic Sentinel)

PORTLAND, Ore. (CNS) — As a Presbyterian teen in the southern Oregon town of Medford, Judy Crowe would walk past Sacred Heart Church on the way to school. The sturdy brick church and the children in tidy uniforms intrigued her.

Now 77, Crowe has become Catholic, confirmed in the very same church April 3. It’s not the building and uniforms that draw her these days, but the chance to participate in liturgy that makes Jesus present.

“You don’t just sit and have someone preach at you,” she said. “In the Catholic Church, you are involved all the time.”

Her interest in the Catholic Church rocketed 15 years ago when her son became a Catholic at Sacred Heart and then was accepted at Mount Angel Seminary 250 miles north in St. Benedict, Oregon.

Father Brent Crowe, a former fish and wildlife biologist, was attracted to Catholicism when he read Pope Benedict XVI’s essay showing that faith and science are compatible partners. Father Crowe now is administrator of Our Lady of the Mountain Parish in Ashland, Oregon, near the California border.

“Watching him is what led me to the church,” Judy, a retired teacher, told the Catholic Sentinel, newspaper of the Archdiocese of Portland. “He never pushed me at all. It just happened. He was a quiet example.”

While in formation for seven years, he brought fellow seminarians to the family farm in Applegate, Oregon, for visits. Judy was touched, recalling the young men as kind and devoted.

She would attend Mass with her son and be drawn to the Eucharist. Father Crowe was ordained in 2018. Last summer, she asked him why she couldn’t receive Communion. She loved Jesus, after all. He informed her she could receive if she joined the church.

Each week for seven months, Judy made the 40-minute drive to Medford for sessions of the Rite of Christian Initiation of Adults. She embraced the learning, saying she now is more aware of who Jesus is. She also loves being involved in this part of her son’s life.

Halsted, 51, teaches in the same room of the same century-old schoolhouse where her mother worked for almost four decades.

Halsted, whose husband is a retired Marine, spent years on the move and popping in and out of various churches. When her brother became Catholic in 2007, she took notice.

“I always knew there was something very special about the Catholic Church,” Halsted said. Her brother, then a seminarian, invited the family to attend Mass. Later, Halsted’s husband joined the church. Before long, she was the one planning ahead about when to attend Mass.

“I felt I wanted to know more,” Halsted said. “I wanted to be more included in all the things Catholics do.”

She is drawn to the universality and unity of the church and is in awe of the seven sacraments. Halsted has seen her prayer life become more consistent. The message that comes through is that she need not try to fix everything but can trust in the work of God.

“I’ve been very excited and happy about their journey,” Father Crowe said of the new Catholics in his family. “Although I couldn’t be in Medford for their initiations, knowing what was happening there made my own celebration of the vigil in Ashland even more special.”

NEXT: Heroic Men promotes ministries for Catholic men to grow in faith