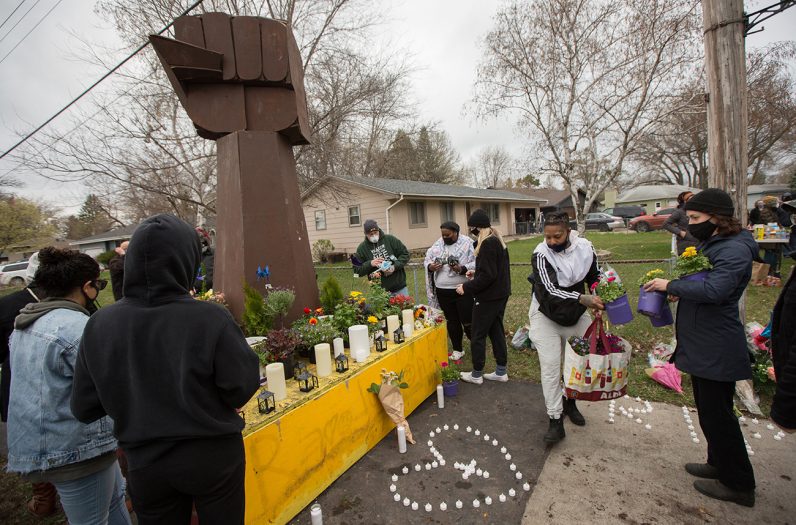 Family members, friends and other members of the community gather at a memorial put up at the site in Brooklyn Center, Minn., April 12, 2021, where Daunte Wright was shot by a Brooklyn Center police officer and died April 11 during a traffic stop. (CNS photo/Dave Hrbacek, The Catholic Spirit)

ST. PAUL, Minn. (CNS) — After a night of protests and vandalism April 11 in Brooklyn Center, Minnesota, following the police shooting of Daunte Wright, Archbishop Bernard A. Hebda of St. Paul and Minneapolis urged prayers for justice and peace.

“I hope that as a community, we might be able to pause and pray, particularly during this time of already heightened tension due to the Chauvin trial,” the archbishop said in an April 12 statement referring to the current trial in Minneapolis of former Police Officer Derek Chauvin over the May 25, 2020, death of George Floyd while he was in police custody.

“I am encouraged and inspired by the pleas for peace that have continued to come from the family of George Floyd” over the Wright shooting, he added.

Wright, a 20-year-old Black man, was hit by a single bullet after officers stopped him for a traffic violation because the car he was driving had expired registration tags but officers then discovered that he had an outstanding warrant.

According to news reports, a struggle ensued as an officer on the driver side of the vehicle began to handcuff Wright, who jumped back into the driver’s seat and was shot.

The local medical examiner said Wright “died of a gunshot wound of the chest.”

Potter, who is white, was immediately placed on administrative leave and she later resigned. 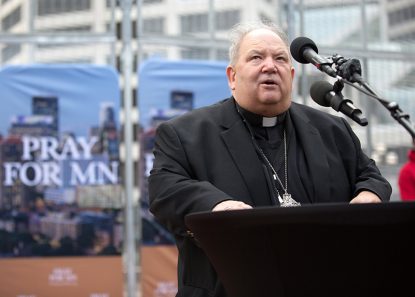 Archbishop Bernard A. Hebda of St. Paul and Minneapolis leads a prayer at the Hennepin County Government Center in Minneapolis during a gathering of pastors and clergy March 7, 2021, ahead of jury selection in the trial of former police officer Derek Chauvin, who is up on murder charges in the death of George Floyd while in police custody May 25, 2020. On April 12, Archbishop Hebda was encouraging prayers and peace following another police-involved death of a young Black man during traffic stop in Brooklyn Center, Minn., April 11. (CNS photo/Dave Hrbacek, The Catholic Spirit)

Brooklyn Center Mayor Mike Elliott initially said April 13 he hadn’t yet accepted her resignation, then was quoted later as saying he hoped the resignation “will bring some calm to the community, but I think ultimately people want justice, they want full accountability under the law.”

On April 14, Potter, 48, was arrested midday and taken to Hennepin County Jail. She was charged with second-degree manslaughter. If convicted, she faces a maximum penalty of 10 years in prison.

The shooting triggered confrontations April 11 and 12 with police and looting in the city. The Minnesota National Guard and State Patrol were called to assist Brooklyn Center police officers. A dusk-to-dawn curfew was ordered April 12 in four surrounding counties; 40 protesters were arrested the evening of April 12.

St. Alphonsus Church, about three miles away from the incident, and its immediate neighborhood was largely peaceful, but vandals hit a mini-mall about two blocks away, causing some damage, said Redemptorist Father John Schmidt, pastor.

The parish school was closed April 12, following the direction of the Brooklyn Center public schools, said the principal, Kari Staples.

A pastoral council meeting scheduled for the evening of April 13 is to include discussion of the parish’s response to the shooting and resulting violence, Father Schmidt told The Catholic Spirit, newspaper of the Archdiocese of St. Paul and Minneapolis. He added that he would really like the parish to “spend some time in prayer.”

In his statement, Archbishop Hebda offered his condolences to Wright’s family and friends “for the loss of their son, father, brother and friend.”

“I have also been praying for his eternal repose, for his family and for all those who loved him. Daunte was created by God in his image and likeness and for a ‘definite purpose,’ as St. John Henry Newman wrote, and we grieve the loss of his young life.”

The archbishop said he also is “praying for the Brooklyn Center Police Officer involved in the shooting, and for her family and friends. I suspect that they are grieving in a different way.”

He said early indications point toward the shooting being accidental, but he encouraged people to allow investigators to complete their work before coming to any personal judgments as to what occurred.

“As I did last month when the (Chauvin) trial began, I ask that all of us take time daily to pray for justice, but also for peace in our families and in our communities,” he added. 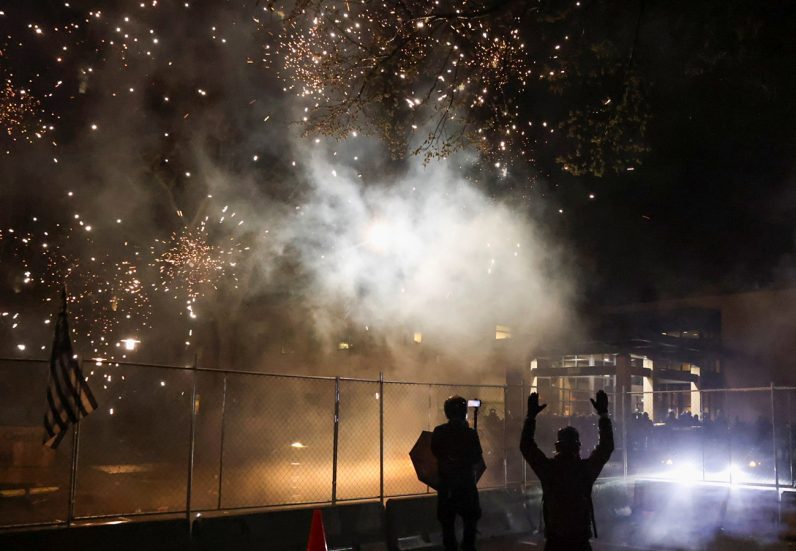 A man puts his hands up while protesters in Minnesota rally outside the Brooklyn Center Police Department April 12, 2021, as it is guarded by police and members of the National Guard, a day after Daunte Wright died after he was shot by a police officer in Brooklyn Center. (CNS photo/Leah Millis, Reuters)