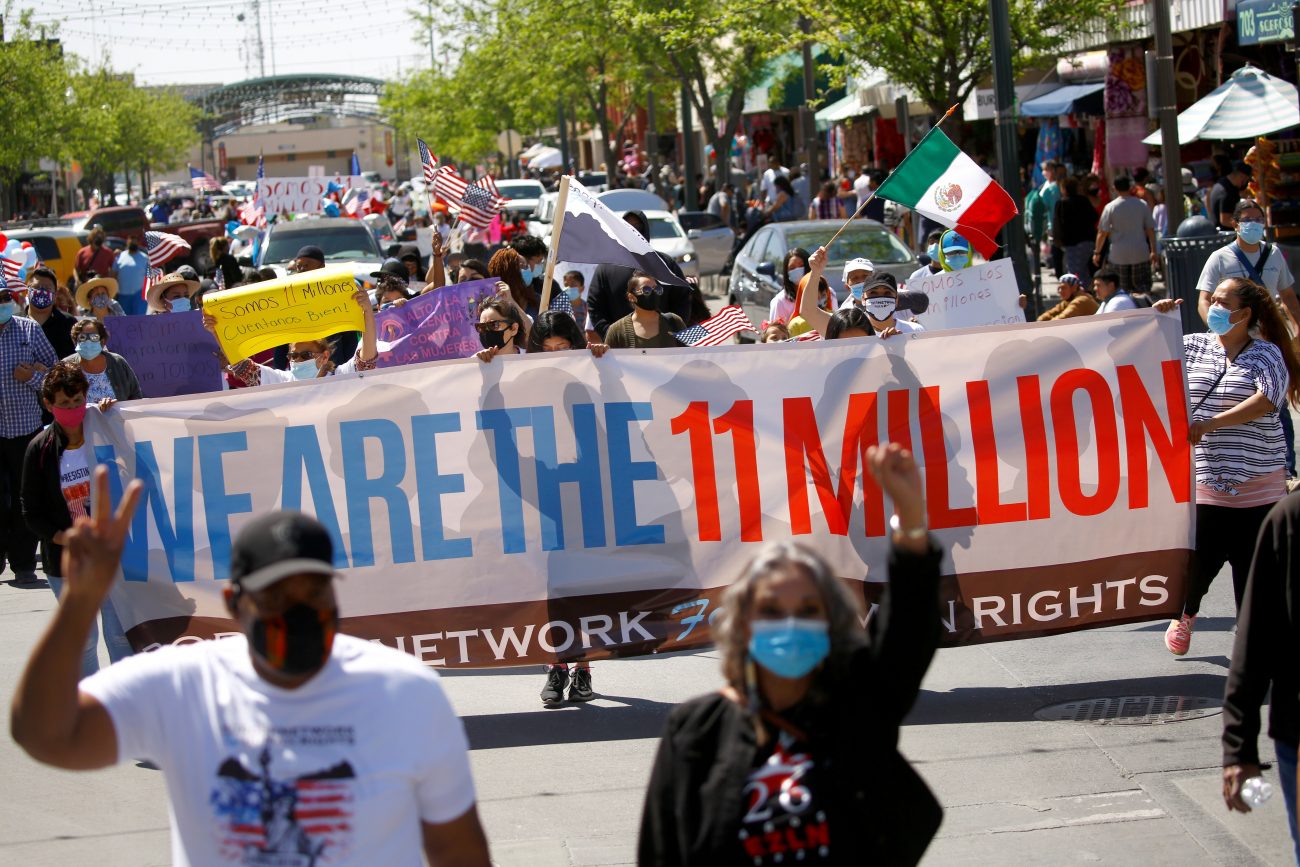 Members of the Border Network for Human Rights and the Reform Immigration Alliance for Texas hold a march in El Paso, Texas, April 10, 2021, to launch the new "We Are The 11 Million" campaign demanding immigration reform and a pathway to citizenship for all immigrants living in the U.S. without documents. (CNS photo/Jose Luis Gonzalez, Reuters)

WASHINGTON (CNS) — The principal message of an April 15 Georgetown University webinar on immigrants at the U.S.-Mexico border: Don’t believe everything you hear from politicians. Because more often than not, no one pays close attention to the reality of border issues, and repeat the same old talking points.

“What ends up being reported by people who don’t really know what’s happening (and) bring a certain bias to the discussion is far from the reality that they experience from day to day,” said Bishop Mark J. Seitz of El Paso, Texas.

“I’ve been in El Paso eight years. To see this cycle continue, and what I’ve seen is that every time we get a cyclical increase in people that are seeking refuge here in this country, the politicians fall into place and you hear them saying the exact same things,” the bishop said. “They could have just replayed it from 2014 or 2019.”

According to an April 8 Washington Post story, U.S. Border Patrol agents took 172,331 border-crossers into custody in March. In February, the number was 100,000.

A recent NBC news report quoted Homeland Security Secretary Alejandro Mayorkas as saying the United States is “on pace to encounter more individuals on the Southwest border than we have in the last 20 years.”

“We are expelling most single adults and families. We are not expelling unaccompanied children,” he said.

In mid-March, President Joe Biden directed the Federal Emergency Management Agency to support the efforts of other federal agencies for the next three months in sheltering record numbers of children arriving at the U.S.-Mexico border without parents.

“We’re seeing an increase in the number of families that are arriving,” said panelist Sabrina Rodríguez, an immigration correspondent for Politico. “There is a mismatch and confusion around who gets to stay and who is sent back. Some families are being allowed to remain in the United States, some are being sent back to Mexico.”

“There is chaos and confusion in the process and the way it’s being administered at the moment,” she continued. “But it’s important to note when we’re seeing these big numbers of (a total of) 172,000 migrants apprehended at the border. It’s not 172,000 people that were let loose in the United States and there is no order. There is a very real system.”

“Maybe it’s time to stop politicizing these issues and begin Christianizing them,” Bishop Seitz said. “Because it seems that many of us who consider ourselves Christians, we have pretty well set aside what our faith should be telling us about these issues as though it really doesn’t apply.”

“We’re so focused on this border situation that we don’t ask ourselves why are they leaving home,” he said. “It’s not because they’re trying to get a nicer car. It’s because they are fleeing. If only we would begin to understand this that the situation in Central America is very, very bad right now.”

He added, “It has violence comparable to war zones (such as) Syria, Afghanistan, when you start talking about homicide rates and the like.”

The Rev. Walter Kim, who heads the National Association of Evangelicals and is the pastor for leadership at Trinity Presbyterian Church in Charlottesville, Virginia, said migration means “I want to take seriously our identity as God’s people. The Bible is a story of migration. Essentially to be a Christian is to be a migrant.”

“I think we’re at a pivotal moment in our country,” he added, “of understanding that not only as God’s people are we essentially migrant people, but this country is essentially a migrant country. Other than the Native Americans, we are migrants who have journeyed here.”

“There is one thing you hear in Washington and a very different thing you hear when talking to people that are dealing with the day to day challenges,” said Rodríguez.

“Nobody at the border, for the most part, is talking to you about ‘well, because Biden said this or Trump said that’ or the politicking about it,” she explained. “It’s very much ‘OK, we’re used to this. We know what to do. We know how to handle this and we’re concerned about getting these people safe and getting them fed and clothed and to their final destination with their family.'”

And they’re “wanting to move past the politics of all this,” she said.

According to Rodríguez, “The reality is while the Biden administration can make certain changes and push the countries in Central America and Guatemala and El Salvador to do something, it takes Congress doing action (on immigration), which it hasn’t done and repeatedly failed to do.”

“I don’t think there’s any question that racism plays a role here,” said Bishop Seitz. “One message we often give to politicians, is watch your language. … If you are painting a situation at the border of chaos, and using words like invasion and criminals are coming across and so on, then there are certainly groups that respond to that.

“They appeal to the fear that people have. And that fear leads very often to surface racism that has been so much a part of our life in this country from its beginning,” he added.

NEXT: Research with fetal tissue from abortion called ‘deeply offensive’