Pope accepts resignation of Minn. bishop over handling of abuse 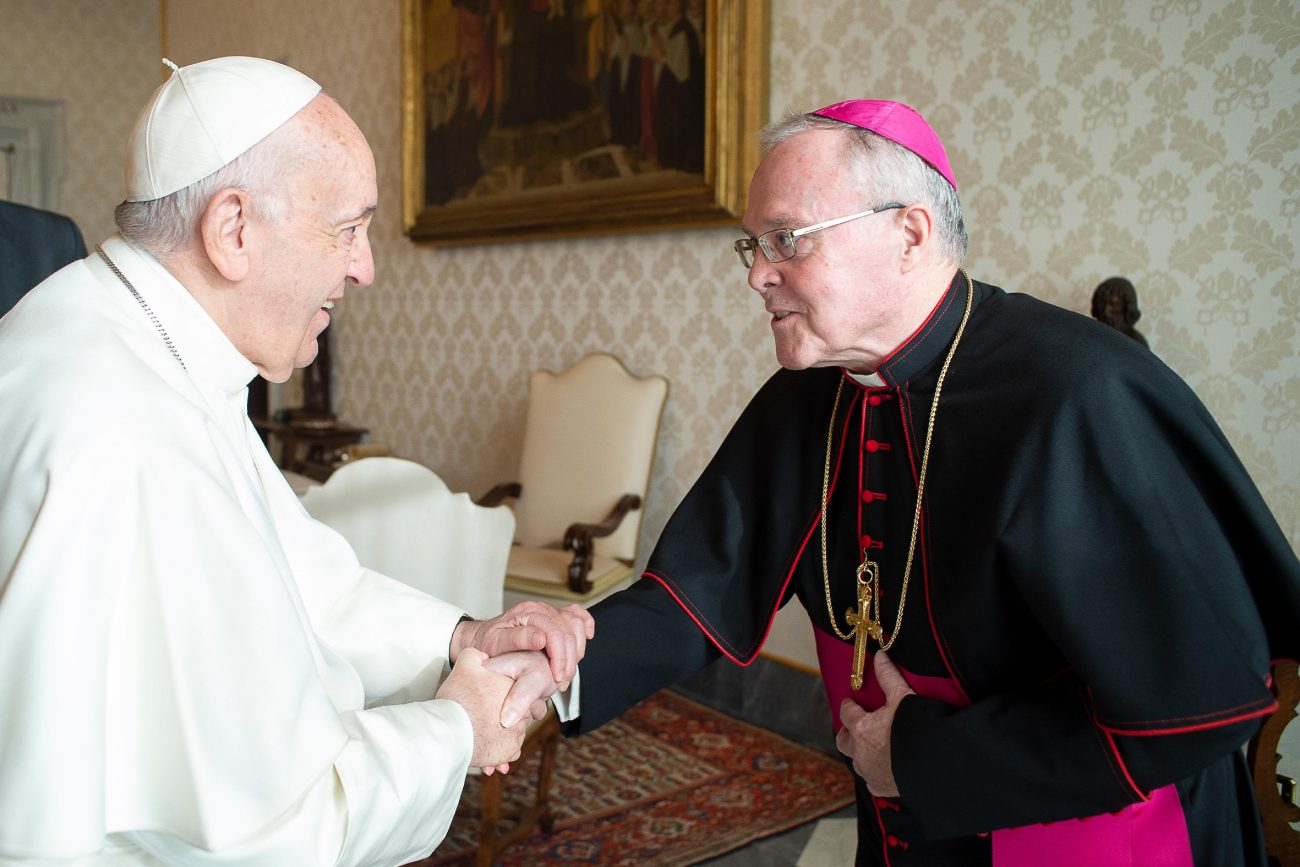 ST. PAUL, Minn. (CNS) — Pope Francis has accepted the resignation of Bishop Michael J. Hoeppner, 71, who has headed the Diocese of Crookston, Minnesota, since 2007.

The changes were announced in Washington April 13 by Archbishop Christophe Pierre, apostolic nuncio.

Statements from the Diocese of Crookston and the Archdiocese of St. Paul and Minneapolis indicated the resignation was requested by Pope Francis and that it “arose from reports that (Bishop Hoeppner) had at times failed to observe applicable norms when presented with allegations of sexual abuse involving clergy of the Diocese of Crookston.”

In 2019, Bishop Hoeppner was publicly accused of trying to cover up allegations of sexual abuse against a priest of the diocese. He has denied he thwarted such an investigation.

In September 2019, Archbishop Bernard A. Hebda of St. Paul and Minneapolis confirmed he was overseeing an investigation into the claims and that law enforcement had been notified.

The archbishop, who is the metropolitan for the province of Minnesota, North Dakota and South Dakota, said the claims against Bishop Hoeppner were reported to him as prescribed by “Vos Estis Lux Mundi” (“You are the light of the world”).

The “motu proprio” (on his own initiative) was promulgated by Pope Francis in May 2019 to set new worldwide norms for reporting sexual abuse and to hold bishops accountable for abuse and/or its cover-up.

With the approval of the Vatican, Archbishop Hebda entrusted the work of the preliminary investigation to Tim O’Malley, director of Ministerial Standards and Safe Environment for the Archdiocese of St. Paul and Minneapolis.

O’Malley conducted the investigation with a team of his staff at the archdiocese and in collaboration with two lay experts: a retired Minnesota Supreme Court justice who serves on the Archdiocesan Finance Council and the archdiocese’s board of directors, and a retired Minnesota state court judge who serves on the Archdiocesan Ministerial Review Board, a consultative group to the archbishop on matters relating to clergy and safe environment standards.

Prior to joining the archdiocesan staff in 2014, O’Malley worked as a deputy chief administrative law judge for the state of Minnesota. He also is a former Minnesota Bureau of Criminal Apprehension superintendent and FBI agent.

According to an April 13 clarification issued by the Archdiocese of St. Paul and Minneapolis, the accusation under investigation was whether Bishop Hoeppner “had intentionally interfered with or avoided a canonical or civil investigation of an allegation of sexual abuse of a minor.”

Neither the April 13 announcements nor previous statements from Archbishop Hebda, who is trained both in canon law and civil law, indicate the specific allegations against Bishop Hoeppner.

However, Ron Vasek, a former candidate for the permanent diaconate in the Diocese of Crookston, has publicly accused Bishop Hoeppner of pressuring him to recant an allegation of sexual abuse against Msgr. Roger Grundhaus, who had held leadership positions in the diocese.

Vasek claims that Msgr. Grundhaus sexually abused him in 1971 when he was a teenager, and that he told Bishop Hoeppner about the abuse in 2009 or 2010, while he was considering entering formation to become a deacon. He said the bishop told him not to tell anyone about the abuse because it would hurt Msgr. Grundhaus’ reputation.

Then, Vasek said, in 2015, Bishop Hoeppner asked him to sign a letter recanting the abuse allegation. He signed the letter, he said, because the bishop had indicated that his refusal would have negative consequences for his son, Father Craig Vasek, a Crookston priest.

Ron Vasek had been prepared to be ordained a permanent deacon in 2017, but he said the bishop thwarted his ordination by asking his pastor to withdraw his support.

In May 2017, Vasek filed civil lawsuits against Bishop Hoeppner and the Crookston Diocese, accusing the bishop of coercion and “intentional infliction of emotional distress.”

Four months later, the diocese announced that Bishop Hoeppner had reached a settlement agreement with Vasek that included a statement that there was no admission of unlawful conduct on the bishop’s part.

On Jan. 7, Bishop Hoeppner provided written answers to O’Malley’s questions, and O’Malley prepared a third report on the investigation. Archbishop Hebda shared that report with the congregation.

During the investigation, the Congregation for Bishops transferred Bishop Hoeppner’s “faculty to deal with cases of sexual abuse against clerics of the Diocese of Crookston” to Archbishop Hebda, according to a February 2020 joint statement issued by the diocese and the archdiocese.

The April 13 clarification from the archdiocese’s Office of Communications states that O’Malley’s three reports and related documentation totaled 1,533 pages and that cumulatively, “the investigations took more than 2,000 hours to complete.”

In an April 13 interview with J.D. Flynn, editor-in-chief of The Pillar, Vasek called Bishop Hoeppner’s resignation “a victory for all those who have been abused by sinful men in the church — a victory for the faithful people of Christ’s church, and a victory for truth.”

A native of Winona, Minnesota, Bishop Hoeppner was ordained a priest for that diocese in 1975 by Pope Paul VI at St. Peter’s Basilica in Rome. He holds a licentiate in canon law from St. Paul University in Ottawa, Ontario. In Crookston, he succeeded Bishop Victor H. Balke, who headed the diocese from 1976 until his retirement in 2007.

The Diocese of Crookston, established in 1909, serves about 35,000 Catholics through 67 parishes.

Wiering is the editor of The Catholic Spirit, newspaper of the Archdiocese of St. Paul and Minneapolis.