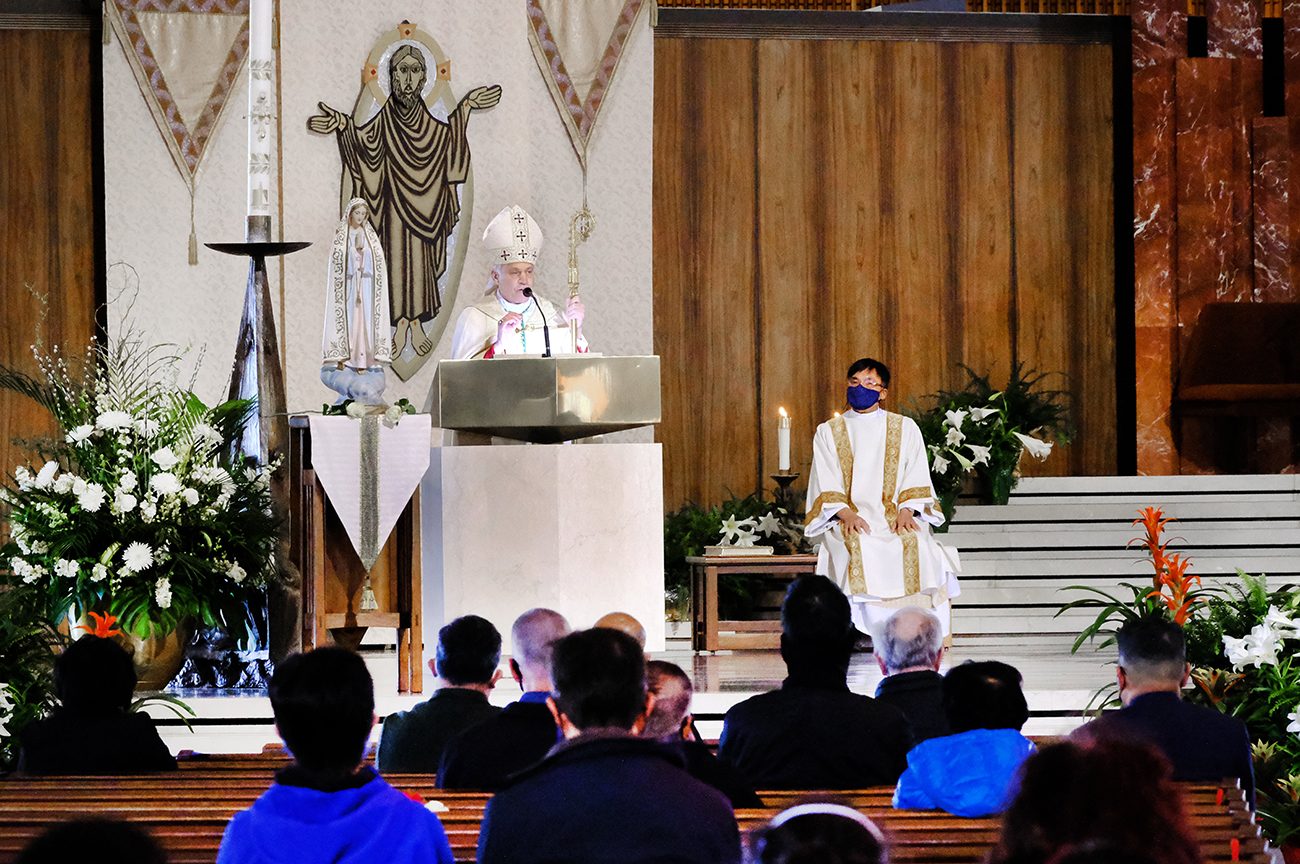 San Francisco Archbishop Salvatore J. Cordileone speaks during an Easter Saturday prayer service for peace April 10, 2021, at the Cathedral of St. Mary of the Assumption in San Francisco. Worshippers joined in prayer for unity and peace and an end to violence and racism against Asian Americans. (CNS photo/Dennis Callahan, Archdiocese of San Francisco)

SAN FRANCISCO (CNS) — Decrying a rise in racial violence especially against Asian Americans, including in San Francisco, a city that he said has always offered “a welcoming and stable home” to newcomers, Archbishop Salvatore J. Cordileone led a prayer service for unity, healing and peace April 10.

“Our city has always been known as a place that welcomes the foreigner, a place of harmonization of diverse cultures where all can be who they are and thrive in community with others,” the archbishop said in his homily at the afternoon prayer service at Cathedral of St. Mary of the Assumption.

It’s “a place where no one has to wander anymore to find a welcoming and stable home,” he added, drawing on the opening lyrics of the city’s official song: “San Francisco, open your Golden Gate/You’ll let no stranger wait outside your door/San Francisco, here is your wanderin’ one/Saying I’ll wander no more.”

The prayer service, attended by about 100 people, was open to Catholics and people of other faiths. It was organized by Father Peter Zhai, director of the archdiocese’s Chinese ministry.

“San Francisco has always been a major destination of immigration,” the archbishop said, welcoming “large waves of Irish and Italian immigrants” in the city’s early history, and the city now teams with immigrants from Mexico, Central America and other parts of Latin America seeking freedom from oppression and a better life.

“The one constant of immigration in our city, though, from the very beginning down to the present time, is immigrants coming from China” and for many years it has received from many other countries in Asia, Archbishop Cordileone said.

“That racial violence would rear its ugly head here, then — especially against Asians who have been such a vital part of this city’s life and culture from the beginning down to the present time — is very disturbing indeed,” the San Francisco prelate said. 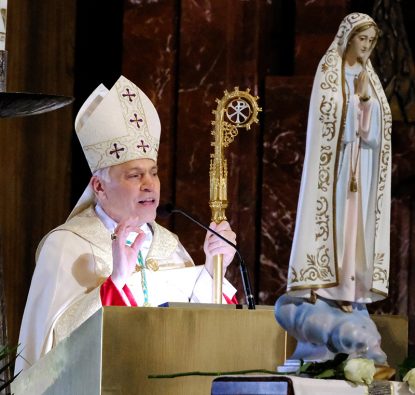 San Francisco Archbishop Salvatore J. Cordileone speaks during an Easter Saturday prayer service for peace April 10, 2021, at the Cathedral of St. Mary of the Assumption in San Francisco. Worshippers joined in prayer for unity and peace and an end to violence and racism against Asian Americans. (CNS photo/Dennis Callahan, Archdiocese of San Francisco)

“This alarming rise in racial violence, even here in San Francisco,” he added, “justifies the words of Pope Francis on this topic just three weeks ago.”

He referred to a tweet March 21 — International Day for the Elimination of Racial Discrimination — in which the pope “compared racism to a ‘virus’ that doesn’t go away, but changes and adapts.”

“Racism is a virus that quickly mutates and, instead of disappearing, goes into hiding, and lurks in waiting. Instances of racism continue to shame us, for they show that our supposed social progress is not as real or definitive as we think,” Archbishop Cordileone said, quoting Pope Francis.

“Very sobering words indeed,” Archbishop Cordileone continued. “We are not as accomplished as we thought when it comes to welcome, inclusion, and living in peace among a diverse population. What, then, are we to do?”

He noted that the vaccine rollout well underway to inoculate people against COVID-19, calling it “very welcome relief,” though there is still much to be known about the coronavirus, its variants and “how long the inoculation will last.”

The virus of racism is a lot like the coronavirus, the archbishop said. “It never goes away, but there are ways to inoculate oneself against it, even if one has to be always vigilant to protect oneself from being infected. But what is our inoculation against racism?”

To find the answer, “we need look no further” than the day’s first reading from the Acts of the Apostles, he said.

“The reading gives a good start in answering that question,” Archbishop Cordileone said. “In its description of the life of the first Christian community, we heard: ‘The community of believers was of one heart and mind, and no one claimed that any of his possessions was his own, but they had everything in common.

“There was no needy person among them, for those who owned property or houses would sell them, bring the proceeds of the sale, … and they were distributed to each according to need.”

This passage shows “the qualities that make such a peaceful and harmonious common life possible,” he explained.

“Each one looked out first and foremost for the good of the other, not what they were going to get out of it. Everyone shared generously, indeed, everything they had in order to contribute to the common good of the community,” he said.

“And the apostles were entrusted with the distribution of these goods, because they were worthy of the trust of the community members — as were the members themselves, in sharing generously of all they had,” he added. “Everyone put the good of the other first, and that requires a lot of humility.”

Archbishop Cordileone said the inoculation against racism “can be summed up in one word: virtue.”

Drawing on the readings for the next day, which was Divine Mercy Sunday, he said these virtues are delineated as generosity, selflessness, trust and trustworthiness, humility, courage, conviction, forgiveness “and, of course, mercy itself.”

He urged the people of San Francisco to lead the way by example.

“Let us make our Golden Gate an authentic symbol of a city that will let no stranger wait outside its door,” Archbishop Cordileone said, “and where the wandering one will say, ‘I’ll wander no more.'”

NEXT: Pope accepts resignation of Minn. bishop over handling of abuse