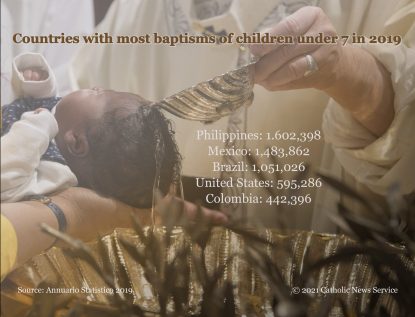 The number of young children baptized in each country of the world is one of many statistics found in the Statistical Yearbook of the Church, which was published in March 2021 and contains figures valid as of Dec. 31, 2019. (CNS graphic/Joanna Kohorst, Vatican Media photograph)

VATICAN CITY (CNS) — The countries in the world with the most people baptized Catholics continue to be, in order: Brazil, Mexico, the Philippines, the United States and Italy.

But, according to the Statistical Yearbook of the Church, as of Dec. 31, 2019, the order and even the countries are different when looking at the number of dioceses or other church jurisdictions, the number of ordinations of diocesan priests that year and the number of children under the age of 7 baptized over the previous 12 months.

The yearbook, which was published in March, contains more than 500 pages of charts and statistical data on church life in every region of the world and almost every nation — China being the key exception.

The statistics range from the number of women religious — 630,099 — to the number of marriage nullity cases completed using “the briefer process before the bishop,” a process instituted by Pope Francis — 1,854.

According to the yearbook, Brazil had 177 million baptized Catholics by the end of 2019; Mexico had 115.5 million; the Philippines had 89 million; the United States had almost 74 million; and Italy had 57.8 million.

But the top-5 countries in terms of the number of dioceses, eparchies, prelatures and other jurisdictions were: Brazil with 278; Italy with 228; the United States with 195; India with 175; and France with 99.

One indication that the order of countries with the most Catholics can and will change is the statistics the book provides on the number of baptisms of children under the age of 7 (the yearbook provides separate statistics for the baptism of people over 7). Throughout 2019, it said, there were more than 1.6 million baptisms of children under 7 in the Philippines; more than 1.48 million in Mexico; more than 1.05 million in Brazil; more than 595,000 in the U.S.; and more than 442,000 in Colombia. The pope’s Argentina came close to making the top 5 with 441,572.

As for ordinations to the diocesan priesthood in 2019, two countries were tied for the top position: the United States and India, each with 415 new priests. Rounding out the top 5 were: Nigeria with 410; Brazil with 390; and Italy with 317.

The Statistical Yearbook also contains figures for the number of Catholic schools at every level and other institutions the church runs to care for people in need.

The countries with the most Catholic hospitals, not counting dispensaries, are: India with 754; the United States with 551; Germany with 439; Congo with 419; and Brazil with 278.

NEXT: Pope calls all Catholics to be missionaries of God’s mercy