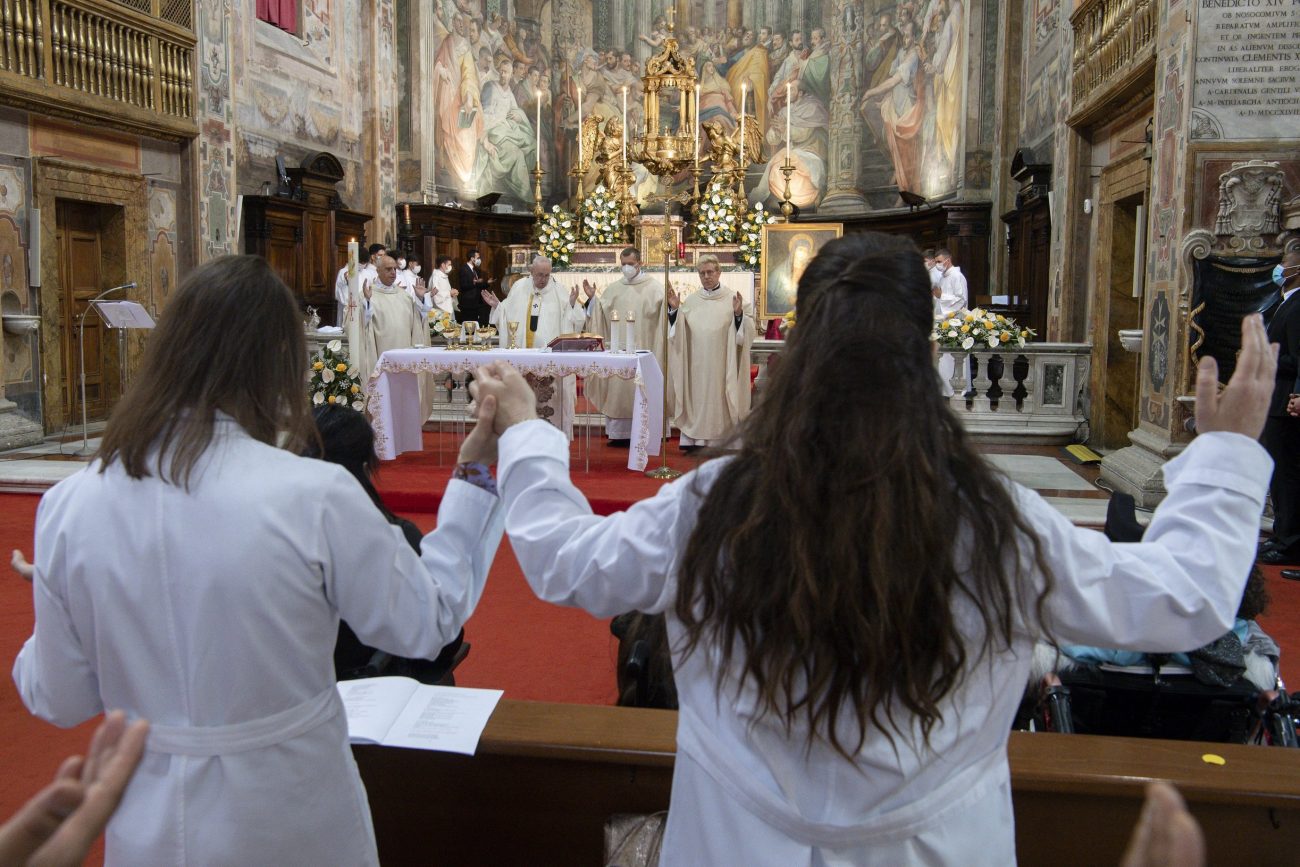 Pope Francis celebrates Mass for Divine Mercy Sunday at the Church of the Holy Spirit near the Vatican in Rome April 11, 2021. (CNS photo/Vatican Media)

ROME (CNS) — Like the disciples, who experienced Jesus’ divine mercy after the resurrection, all Christians are called to become missionaries, sharing the Gospel of God’s love and mercy with others, Pope Francis said.

Pope Francis celebrated the Mass for Divine Mercy Sunday at the Rome Church of the Holy Spirit, just a block away from St. Peter’s Square. The church is the Rome Shrine of Divine Mercy, a devotion begun by St. Faustina Kowalska and promoted by St. John Paul II.

Because of COVID-19 restrictions, fewer than 100 people were present for the Mass, wearing masks and seated only two people to a pew, except if they were members of the same family.

At the end of the Mass, Pope Francis thanked those invited: nurses and doctors from the hospital next door, refugees, people with disabilities, priests serving as “missionaries of mercy,” inmates from several correctional institutes and representatives of Italy’s civil protection service. The pope told them they represent “realities where mercy becomes concrete, draws close and serves those in difficulty.”

After reciting the “Regina Coeli” prayer with those present, the pope greeted each individual personally, shaking hands, blessing them and even posing for a few selfies.

In his homily at the Mass, Pope Francis focused on how, prior to the resurrection, the disciples misunderstood so much of what Jesus said and how they abandoned or even denied him at the hour of his passion and death.

But when the disciples are hovering in fear in the closed room, he noted, the Risen Lord appears to them and “raises them up with his mercy.”

“Having received that mercy, they become merciful in turn,” the pope said. “It’s very difficult to be merciful if you have not been shown mercy.”

Saying, “Peace be with you,” Jesus sets their troubled hearts at ease and forgives their failings, he said, lifting them up and filling them with the courage they need to be his witnesses.

“The disciples were guilty; they had run away, they had abandoned the master,” the pope said. “Sin brings torment; evil has its price. Our sin, as the psalmist says, is always before us.”

“Like those disciples, we need to let ourselves be forgiven,” the pope said. “Let us ask for the grace to accept that gift, to embrace the sacrament of forgiveness. And to understand that confession is not about ourselves and our sins, but about God and his mercy.”

When Jesus showed the disciples the wounds of his crucifixion, the pope said, he was not simply proving he had risen, but also made it possible for them to see and touch “the fact that God has loved us to the end. He has made our wounds his own and borne our weaknesses in his own body.”

The day’s first reading, from the Acts of the Apostles, recounted how the early Christian community shared everything they had in common. “This is not communism, but pure Christianity,” the pope said.

The disciples “discovered that they shared the mission, the forgiveness and the body of Jesus, and so it seemed natural to share their earthly possessions,” he said. “Their fears had been dispelled by touching the Lord’s wounds, and now they are unafraid to heal the wounds of those in need, because there they see Jesus. Because Jesus is there in the wounds of the needy.”

Catholics today, he said, need to ask themselves if they show others the mercy they have been shown by God and if they feed the hungry like Jesus feeds them in the Eucharist. 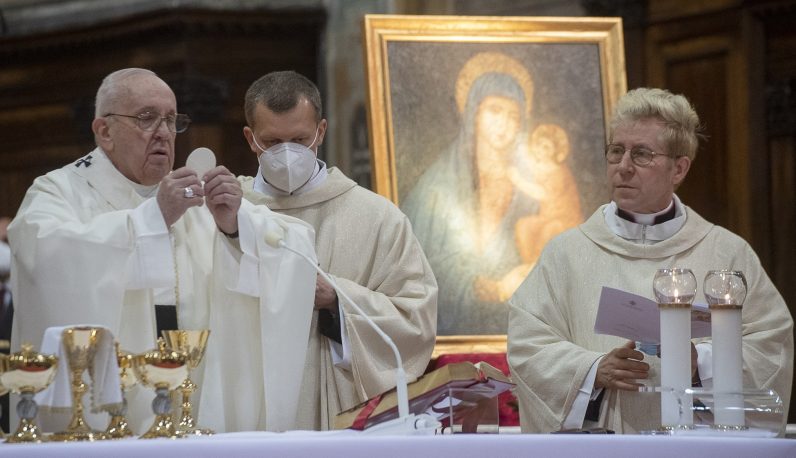 Pope Francis celebrates Mass for Divine Mercy Sunday at the Church of the Holy Spirit near the Vatican in Rome April 11, 2021. Also pictured is Msgr. Jozef Bart, right, rector of the church. (CNS photo/Vatican Media)

PREVIOUS: A look at top-5 lists of facts from Catholic Church around the world