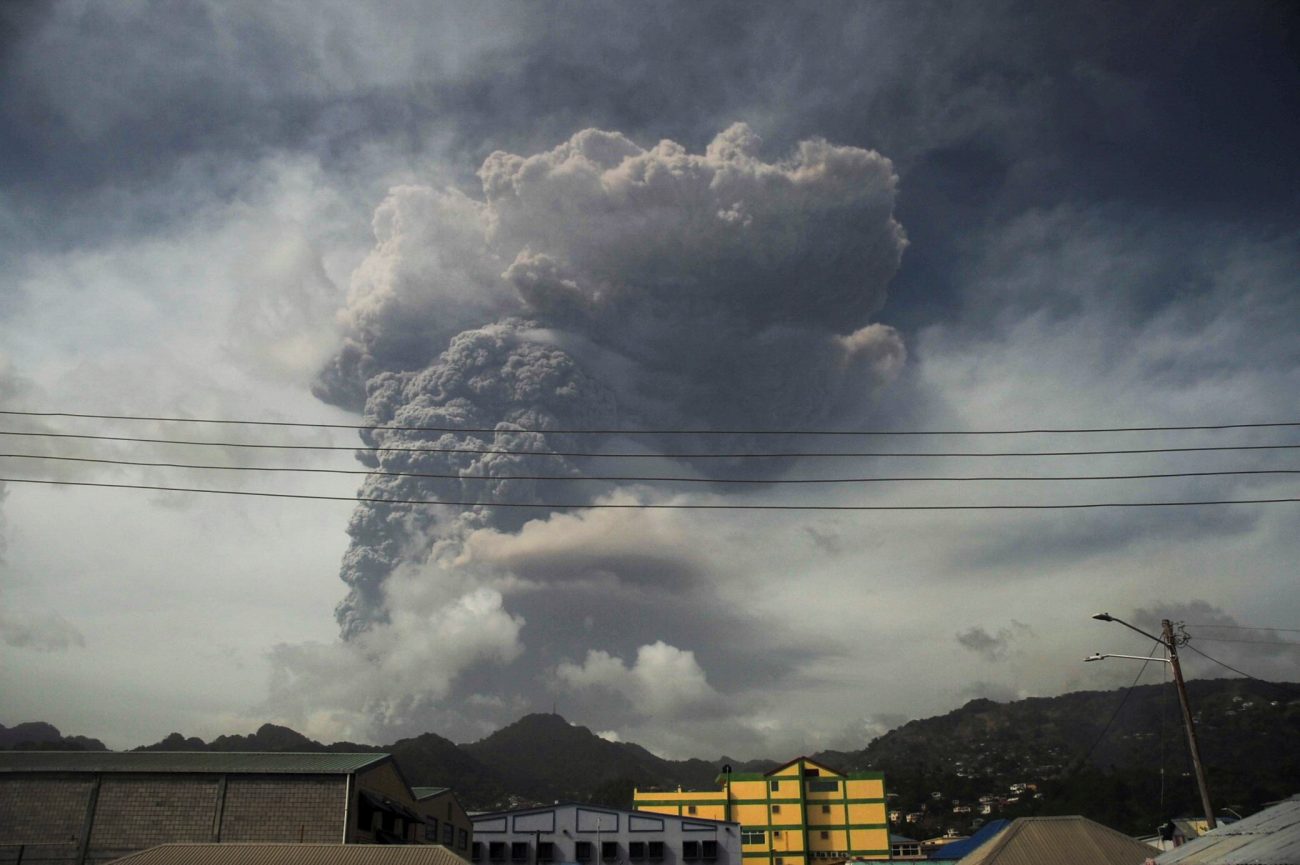 Ash and smoke billow as the La Soufrière volcano erupts as seen from Kingstown April 9, 2021, on the eastern Caribbean island of St. Vincent and the Grenadines. (CNS photo/Robertson S. Henry, Reuters)

PORT-OF-SPAIN, Trinidad (CNS) — Despite COVID-19 restrictions and various challenges posed by continuous volcanic eruptions and ashfall on St. Vincent and the Grenadines and neighboring islands, dioceses in the West Indies have rallied to the aid of those affected by La Soufrière volcano.

“There is an immediate response with the things they need most,” said Archbishop Jason Gordon of the Archdiocese of Port of Spain, Trinidad and Tobago, April 10. “Once we get that done, then we start working with them to consider the scale of the problem and what kind of response will be needed.”

The Associated Press reported April 12 La Soufrière had its biggest explosion since its initial eruption April 9.

The northernmost quadrant of the island of St. Vincent was marked as the “red zone”; this is the area surrounding the La Soufrière volcano and was most at risk in the event of an eruption. An April 9-10 UNICEF situation analysis said that between 16,000 and 20,000 people had been evacuated from that zone, with at least 3,200 being housed in 62 local shelters. Cruise lines that frequent Caribbean routes have volunteered cruise ships to ferry Vincentians to surrounding islands that are receiving evacuees.

Supplies in the local shelters were needed. Father Alando Williams, diocesan chancellor of the Kingstown Diocese, said April 12 that many in the shelters had nothing to sleep on, and getting food to them was a challenge. There were “those who left home with nothing, so we have to find even clothes,” he said. “Water cannot be restored right now because the water systems are contaminated from the ashfall.” 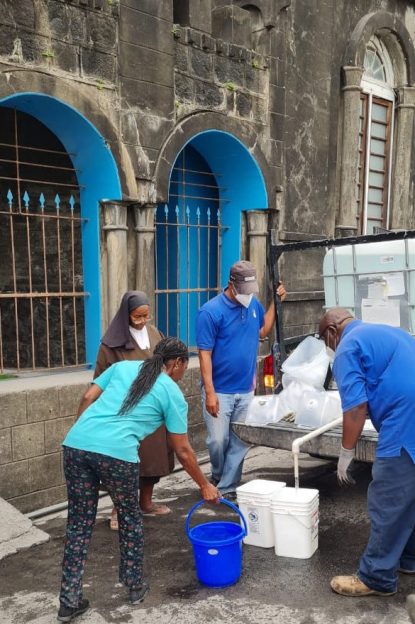 A nun and other volunteers in the Diocese of Kingstown distribute water to shelters April 12, 2021, following the eruption of the the La Soufrière volcano on the eastern Caribbean island of St. Vincent and the Grenadines. (CNS photo/courtesy Caritas Antilles) Editors: best quality available.

St. Lucia Prime Minister Allen Chastanet committed to accepting at least 300 Vincentians, with the possibility of taking more later. Local families have been asked to help shelter them.

Archbishop Robert Rivas of Castries, St. Lucia, instructed local clergy to be “on the alert in the parishes if evacuees are .. placed in their communities.”

“The church must become actively involved in whatever means of caring for them that we can,” said Archbishop Rivas. “We can do that through Caritas Antilles. We have two warehouses, so there is enough to help St. Vincent in a very big way and those who may come to St. Lucia as part of an evacuation strategy.”

Marcia Haywood, regional coordinator Caritas Antilles in St. Lucia, deployed members of its Youth Emergency Action Committee to lend support to the National Emergency Management Organization in Castries. A cadre of at-risk youth trained in first aid and damage needs assessment, their initial functions included distribution of supplies and performing temperature screening for COVID-19 on all arrivals, in keeping with the island’s pandemic protocols.

“We are supported by an international network, so we have access to international funds if need be,” Haywood said April 10. She added the agency was working with network partners.

Caritas Antilles had already begun stockpiling items on a needs list, such as dust masks and respirators, and also “redirected some of our supplies to support shelters in Grenada, St. Lucia and Dominica,” Haywood said.

Grenada and Dominica have also committed to accepting evacuees.

Most people obeyed the evacuation orders, but some remained, tempting ministry and outreach.

“We’ve not been able to go back because of the very intense ashfall,” said Redemptorist Father Kevin Murray of St. Benedict’s Church, Georgetown, on St. Vincent’s northeast coast. Most of his parishioners had already left the area, Father Murray said; he continued to be in touch with some online.

“There’s a mist, a fog, if you will, of ash; it’s coating the ground,” said Father Murray. “We’ve not able to go into the area for aid because the ash is so dense on the ground.”

Authorities have been advising people to remain inside because of the blanket of ash that smothered the entire island and the smell of sulfur that still hangs on the air. State emergency personnel continued to extract red zone stragglers.

Both Father Murray and his confrere, Brother Gerard St. Hillaire, were housed with the bishop of Kingstown, on the island’s southwest coast.

“The air is not clear,” said Father Murray, “but the visibility is clearer than in the north.” He and Brother St. Hillaire helped transport pedestrians on the way out of the zone during the evacuation, a process Father Murray described as “quick!”

Red zone residents had been forewarned to start thinking evacuation, so when the advisories were issued, Father Murray said: “We were prepared. I had moved the Blessed Sacrament from (St. Benedict’s) and had them in our community house. I just had the Eucharist and one ciborium to take with me.”

Father Williams is originally from Fancy, a coastal village a few minutes north of La Soufrière. His family left the red zone safely April 8 to stay with relatives in the south. He said he feels pain for his people and country.

“I will admit, I broke down on Saturday morning when I saw all the ash falling on Kingstown and the place was just dark and covered,” he said. “Night lights were still on.”

But, he added, “I am hopeful right now despite the continued eruptions.”

“Easter presents hope even in the midst of the tribulations,” said Father Williams. “It is like you are in the darkness of the tomb, knowing that one day there will be that new light.”