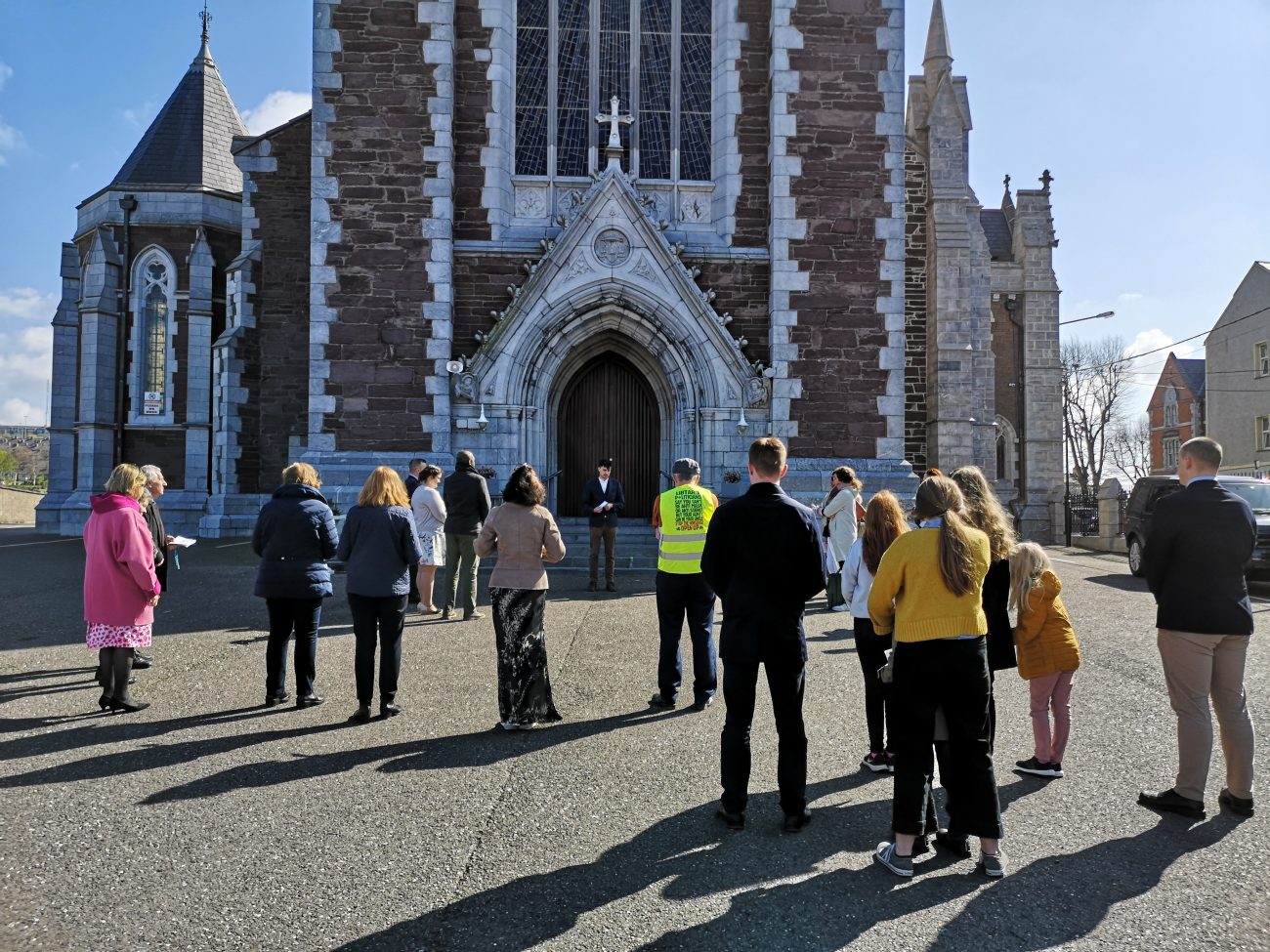 Catholics stand outside Sts. Anne and Mary Cathedral in Cork, Ireland, April 4, 2021, praying that it would be open for Easter Mass during the COVID-19 pandemic. Churches in the Irish Republic have been closed for public worship since Dec. 26, but on April 16, the health minister made it a crime to celebrate or attend a public Mass. (CNS photo/Cillian Kelly)

DUBLIN (CNS) — The head of the Irish bishops’ conference said the government’s move to criminalize attendance at Mass as part of COVID-19 regulations was a “potential infringement of religious freedom and of constitutional rights.”

“The precise provisions are unclear and at first reading appear to be draconian, going further than the restrictions we have been cooperating with throughout the pandemic to date,” said Archbishop Eamon Martin of Armagh, Northern Ireland. “We shall be seeking legal counsel to advise on several questions concerning the extent of the statutory instrument.”

He also said the bishops were seeking “an immediate meeting” with the government “and we request the suspension of this harsh and unclear statutory instrument.”

Churches in the Irish Republic have been closed for public worship since Dec. 26, but the government has claimed that this was just a matter of regulation rather than law.

However, on April 16, Health Minister Stephen Donnelly signed a new law — known as a statutory instrument — making it a criminal offense.

“We consider the publication of this statutory instrument, together with associated penal provisions, to be provocative and formally enacting a potential infringement of religious freedom and of constitutional rights,” Archbishop Martin said.

“Together with other churches and faith communities, we have been cooperating fully with public health messages for more than a year now. At the same time, we have consistently impressed on (the) government that people of faith value highly their spiritual well-being and consider the public practice of their faith as essential — something which has not been sufficiently recognized in statute.

“It is highly disappointing then that, despite the reassurances of the taoiseach (Irish prime minister) to church leaders only two days ago that he understood the importance of faith and worship to the people of Ireland, this statutory instrument was introduced in a clandestine manner and without notice or consultation.

“We consider this to be a breach of trust,” Archbishop Martin said.

His Archdiocese of Armagh straddles the border between Northern Ireland and the Irish Republic. North of the border, churches have been reopened since late March. However, in the Republic, public worship remains online only.

Meanwhile, a case before the High Court challenging the ban on public worship is due to be heard April 27. Similar bans in nearby jurisdictions — including Scotland — have been found to be unlawful.