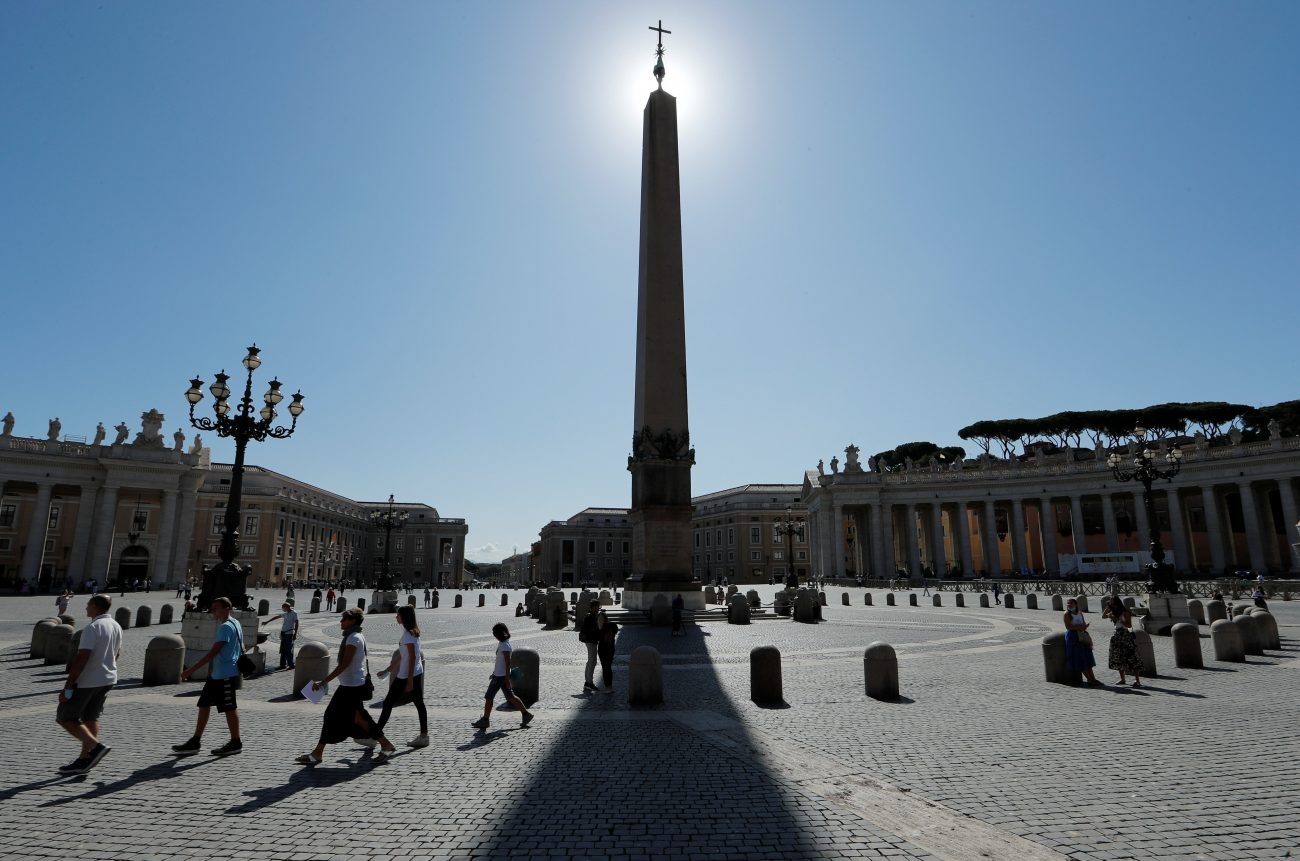 People walk in St. Peter's Square at the Vatican in this Aug. 5, 2020, file photo. Pope Francis approved new laws April 29 that require Vatican officials and employees to sign a declaration stating they have not been and are not suspected of committing crimes. A new law also prohibits all Vatican employees from accepting or soliciting "gifts, presents or other benefits with a value greater than 40 euros ($48)." (CNS photo/Remo Casilli, Reuters)

(CNS) — Pope Francis approved a new set of laws that require Vatican officials and employees to sign a declaration stating they have not been and are not suspected of committing crimes, including money laundering, corruption or exploitation of minors.

The measures, issued “motu proprio,” on the pope’s own accord, and published April 29, also prohibit all Vatican employees from “accepting or soliciting, for themselves or for parties other than the entity for which they work, by reason of or on the occasion of their office, gifts, presents or other benefits with a value greater than 40 euros,” the equivalent of about $48.

The pope said that while laws he promulgated in June 2020 covered contracts for the purchase of goods, property and services for both the Roman Curia and Vatican City State offices, corruption can still “be manifested in different manners and forms even in various sectors other than that of procurement.”

For this reason, the pope wrote, “internationally accepted regulations and best practices require transparency from those holding key roles in the public sector for the purpose of preventing and combatting conflicts of interest, patronage practices and corruption in general.”

The new laws also will ensure that Vatican officials and employees will uphold their “responsibility of making concrete the fidelity spoken of in the Gospel, acting according to the principle of transparency and in the absence of any conflict of interest,” the pope wrote.

The heads of Vatican dicasteries, as well as officials who carry out “administrative, judicial or supervisory functions,” must sign a declaration when hired and again every two years attesting that they have not been convicted of a crime in Vatican City State or any other country. They must also declare to have not been pardoned or received amnesty for a crime nor to have avoided being charged with a crime due to the statute of limitations.

Among the crimes specified in the new norms are fraud, corruption, tax evasion, money laundering, organized crimes, as well as the exploitation of minors and human trafficking.

Those who sign the document also must declare they do not hold investments in companies located in countries at high risk for money laundering and attest that all the goods they own were obtained legally.

Moreover, it requires signatories not to hold “any shares or interests in any companies or businesses operating for purposes and in sectors contrary” to the social teaching of the Catholic Church.

The Secretariat for the Economy, the pope wrote, is charged with confirming the veracity of the signed declarations.

“False or mendacious declarations constitute a serious disciplinary offence,” resulting in the employee’s dismissal and “entitles the Holy See to claim for any damage suffered,” he wrote.