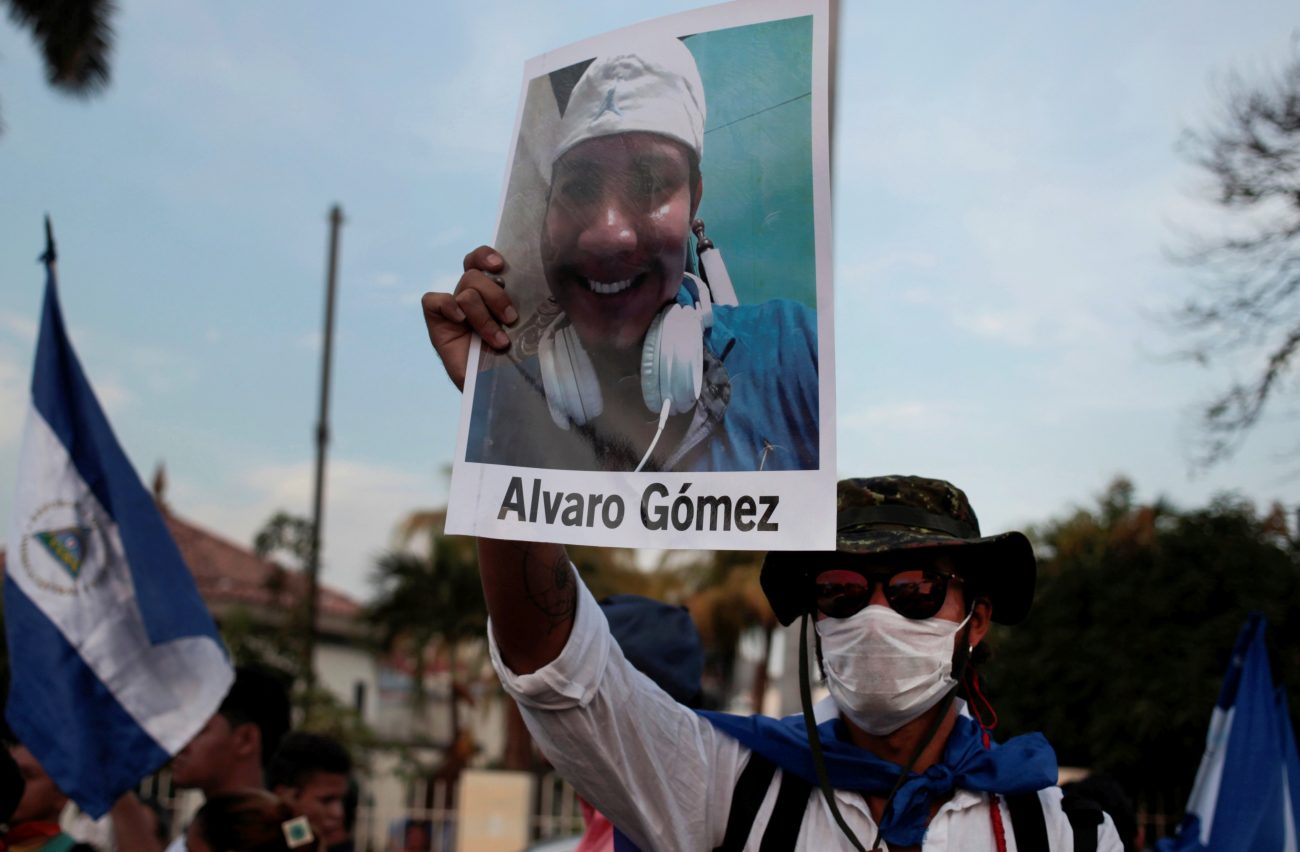 A man holds a photo of Álvaro Gómez during a protest in Managua, Nicaragua, May 10, 2018. Gómez was killed during a protest over reforms of pension plans of the Nicaraguan Social Security Institute. The protest was organized by the Mothers of April Movement to demand justice from President Daniel Ortega's government. (CNS photo/Oswaldo Rivas, Reuters)

Father Edwin Román celebrated Mass recently for the family of university student Álvaro Gómez, who was killed three years ago in demonstrations against the Nicaraguan government.

Police and paramilitaries and some bystanders, meanwhile, gathered outside the St. Michael the Archangel Parish in the city of Masaya — something noted by the priest in his homily.

“Imagine, outside are police and paramilitaries, and they outnumber us. What an embarrassment. The only ones here are a family, who are praying for a loved one, a few people invited, some media outlets and a priest,” Father Román said April 21, according to the newspaper La Prensa.

“We do not deserve to be under siege, do not deserve this repression, these imprisonments, these deaths. May God hear our prayers and wipe away the tears of those who have lost loved ones.”

When the Mass ended, someone outside threw stones at the church, said Father Román. A journalist, Noel Miranda from Artículo 66, was also struck by a stone, thrown by a reporter from a pro-government outlet. Father Román later tweeted, “The parish was surrounded by at least 80 people, between police and fanatics.”

Nicaragua recently marked three years of crackdowns on protests, which started in April 2018 over proposed reforms to the state social security institute, but became a call for sweeping changes in the Central American country. The attacks on the Catholic Church also continue, ranging from a firebombing in the Managua cathedral to police parking their vehicles outside parishes during Sunday Mass.

“They know that if they allow the most minimal amount of disorder, everyone will protest because nobody likes this government,” said Msgr. Carlos Avilés Cantón, Managua archdiocesan vicar general. “So, they’re not going to give even an inch to anyone.”

The Catholic Church tried to mediate dialogue between the two sides and early on proposed interim elections as a solution. But the talks broke down, and some of the participants accused the government of bad faith. The church’s willingness to accompany protesters and provide them spiritual attention and a refuge in parishes during police attacks also drew the ire of the ruling Sandinista party.

“The dialogue ended because the government said the church was a coup monger and terrorist,” Msgr. Avilés said, referring to an epithet used by Vice President Rosario Murillo, wife of President Daniel Ortega.

Three years later, protests are quickly suppressed and people cannot even wave a Nicaraguan flag in public, Msgr. Avilés said. False stories about the church are spread, too. Elections are upcoming in November, but church officials warn the outcome is a forgone conclusion.

“They’re insisting (there must be elections) even if they are fraudulent,” Msgr. Avilés said. “If there are not the conditions — there are political prisoners, there is repression, there haven’t been demonstrations — how are they going to have an elections?”

The COVID-19 crisis has hit Nicaragua especially hard, too. People have been encouraged to act as if the virus did not exist. Doctors — who were fired for treating protesters in 2018 — are underequipped to deal with so many COVID-19 patients “and people no longer trust in the health system,” Msgr. Avilés said.

The church in Nicaragua has continued speaking out, though one of its most outspoken leaders, Auxiliary Bishop Silvio José Báez, was forced to leave the country for his own security. His Sunday homily — often from St. Agatha Parish in Miami — is spread widely in Nicaragua and often takes issue with the country’s repressive political practices.

In his April 18 homily, Bishop Báez prayed for the victims of the protests, the political prisoners and those sent into exile.

“Justice is not negotiable and impunity is unacceptable in the eyes of God,” Bishop Báez said.

“God is with those who suffer, with the poor, with the excluded, the victims. God is not a part of political, criminal and unjust systems and not with the powerful who oppress their people,” he continued. “Are we on the side of those who crucify or those who are crucified? … The best expression of our faith in the resurrected Lord is not forgetting the victims and putting ourselves at the service of the crucified.”