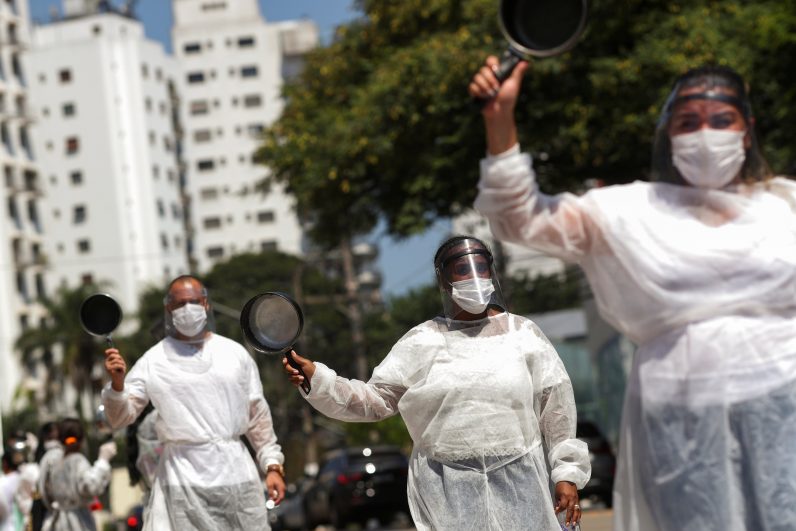 Residents wearing protective masks and face shields hold pots during a protest against hunger in São Paulo March 26, 2021, during the COVID-19 pandemic. Catholic entities in Brazil are ramping up their efforts to feed the rising number of people going hungry, as unemployment increases and COVID-19 infections surge in the country. (CNS photo/Amanda Perobelli, Reuters)

SÃO PAULO (CNS) — As unemployment increases and COVID-19 infections surge in the country, Catholic entities in Brazil are ramping up efforts to feed the increasing number of people going hungry.

“The pandemic did not only affect those who live on the streets. It has hit even those who have homes,” Father Revislande dos Santos Araújo of Our Lady Consolata Parish in Boa Vista, told Catholic News Service.

The priest, who started a social project dubbed Stirring the Pot in 2015 to distribute meals to drug addicts and homeless, now also serves meals and distributes food to Venezuelan refugees camped on the streets and Brazilians who lost their jobs.

Back in 2015, the priest cooked and distributed the meals around the neighborhoods of Boa Vista. “In the beginning, 40 meals were made per day, but at the end of the first year, with the help of donations we were distributing 70 meals,” he said.

With the arrival of Venezuelans in 2016, he explained, the initiative became a bigger project.

“We saw that many did not make it into the shelters and set up camp around the main bus station. They often did not have food to eat, so we extended our Stirring the Pot to help them, too,” he said. “With the pandemic, we offer 1,200 to 1,500 meals per day for those who live on the streets.”

In addition to the homeless and refugees, he said, his parishioners, people with very little means, are also suffering.

“We live in a poor area; our parishioners are poor people. The majority are construction workers, cleaning ladies, etc. With the pandemic, these people lost their jobs. There was a huge increase in poverty and people frequently do not have enough to eat — something that before (pandemic) we did not see often,” he said. 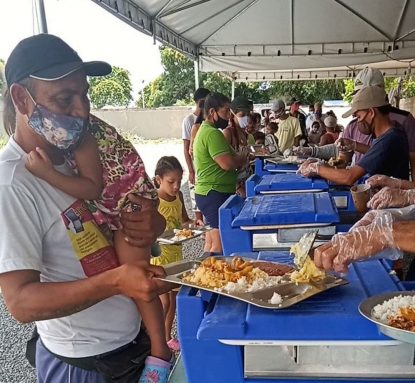 Venezuelan refugees in Boa Vista, Brazil, receive food from “Stirring the Pot,” a Catholic-run program. Catholic entities in Brazil are ramping up their efforts to feed the rising number of people going hungry, as unemployment increases and COVID-19 infections surge in the country. (CNS photo/courtesy ‘Mexendo as Panelas’ program/Our Lady Consolata parish)

“For the Venezuelans who live in tents near the bus station, we send meals, while, for the Brazilian families, we send them food packages, so they can cook at home,” he told CNS.

However, donations are decreasing.

“Those who used to donate a kilo of beans, a kilo of rice, now are asking for donations. I try to reach out, doing live events on the Internet asking for help, but there are many of my parishioners who used to help and now no longer can because they are finding it hard to put food on the table themselves,” he said.

Father Araújo, who teaches at the city’s public schools, recalled more than one of his students reaching out to him saying, “‘My mom has lost her job, we don’t have enough to eat at home.'”

The dwindling number of volunteers and donations are also seen in other parts of Brazil. Now, a campaign promoted by the Archdiocese of São Paulo along with the charitable aid agency Caritas not only aims to collect money and food for the vulnerable but also to encourage new volunteers to step up and contribute.

“Despite the solidarity, things are getting more difficult. The people who helped are now out of a job,” said Father Marcelo Maróstica Quadro, Caritas director and pastoral coordinator of the Belém region in São Paulo.

“Hunger is a reality that goes against God’s plan,” said Father Quadro.

He said Caritas has mapped out 450 “points of hope,” where it collects and distributes meals and food baskets. Most of the parishes around São Paulo serve as points of hope. 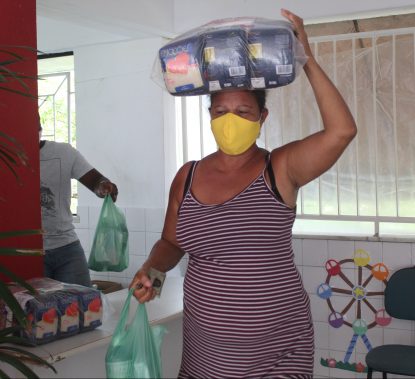 A woman in need receives food aid from AVSI in Boa Vista, Brazil. Catholic entities in Brazil are ramping up their efforts to feed the rising number of people going hungry, as unemployment increases and COVID-19 infections surge in the country. (CNS photo/courtesy AVSI)

At the beginning of the pandemic, he said, St. Joseph Parish distributed 40-50 food baskets per month. “Now we distribute more than 300,” he added.

With unemployment rising and food insecurity increasing, the archdiocese, through Caritas, also created a Committee to Fight Hunger and introduced a number of actions to mobilize and unite parishes and parishioners.

“There are a lot of people suffering. Let us help. Let us reach out as best as we can so that these people do not have so much suffering,” Cardinal Odilo Pedro Scherer said during his weekly radio show.

Other entities linked to the Catholic Church have also stepped up to help. The Brazil branch of AVSI, a Milan-based organization founded on Catholic social teaching, has run three separate programs to deal with the issue: two food basket campaigns and now a program offering meal vouchers for 500 families whose children attended a day-care center funded by AVSI. With the schools closed, these children are unable to eat breakfast and lunch at the center.

“We are now trying to get the day-care center reopened, because many of those children depended on those meals,” said Fabrizio Pellicelli, president of AVSI in Brazil.

“In a country like ours, everything that is planted grows,” said Father Quadro. “There shouldn’t be a reason for our people to go hungry. There is a lack of policies by the government to reduce food insecurity in this country.”

NEXT: ‘Patients are … dying in front of my eyes,’ says India hospital director