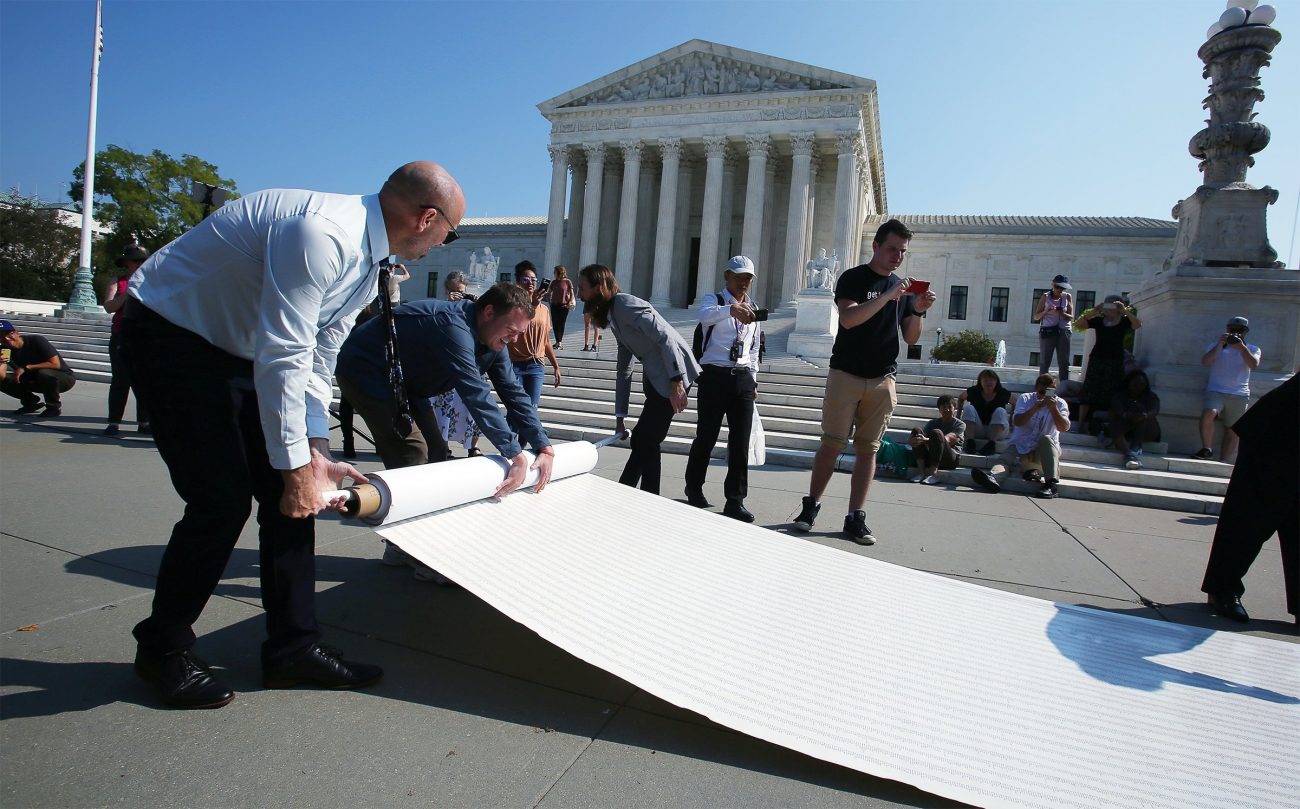 Pro-life leaders unfurl a petition in front of the U.S. Supreme Court in Washington Oct. 1, 2019, with more than 250,000 signatures calling for the court to overturn Roe v. Wade. This year, U.S. bishops are encouraging Catholics to sign a petition to oppose the Hyde Amendment's repeal. The Hyde Amendment would prevent federal funding for abortion as a permanent part of the law. (CNS photo/Tyler Orsburn)

WASHINGTON (CNS) — Diocesan Respect Life coordinators and the Pro-Life Secretariat of the U.S. Conference of Catholic Bishops are encouraging Catholics to speak out against the repeal of the Hyde Amendment, legislation which bans federal Medicaid funding of abortions.

“It is so important for people in our parishes to learn about the Hyde Amendment and the life-saving, conscience-protecting impact it has had for the past 45 years. Without this protection, our federal tax dollars will contribute to millions more abortions around our nation and beyond,” said Rachel Hendricks, diocesan Respect Life coordinator for the Diocese of Trenton, New Jersey.

The Hyde Amendment, which first became law in 1976, prohibits use of federal Medicaid dollars for abortion except in cases of rape, incest or when the life of the woman would be endangered.

Named for former Representative Henry Hyde, Illinois Republican, the amendment is renewed every year as part of the appropriations bill for what is now the Department of Health and Human Services.

It was excluded, however, in the $1.9 trillion American Rescue Plan Act that was signed into law March 11 by President Joe Biden.

As the amendment faces an uncertain future, the USCCB’s Pro-Life Secretariat is encouraging Catholics to sign the petition asking members of Congress to oppose the Hyde Amendment’s repeal at https://www.notaxpayerabortion.com/.

The petition urges members of Congress “to ensure that the Hyde Amendment and all similar life-saving appropriations riders remain in place during the 117th Congress and beyond.”

“Do not force Americans to subsidize the taking of innocent life,” it adds, urging Congress to “oppose any bill, including any appropriations bill, that expands taxpayer funding of abortion.”

NEXT: University president resigns due to inappropriate behavior