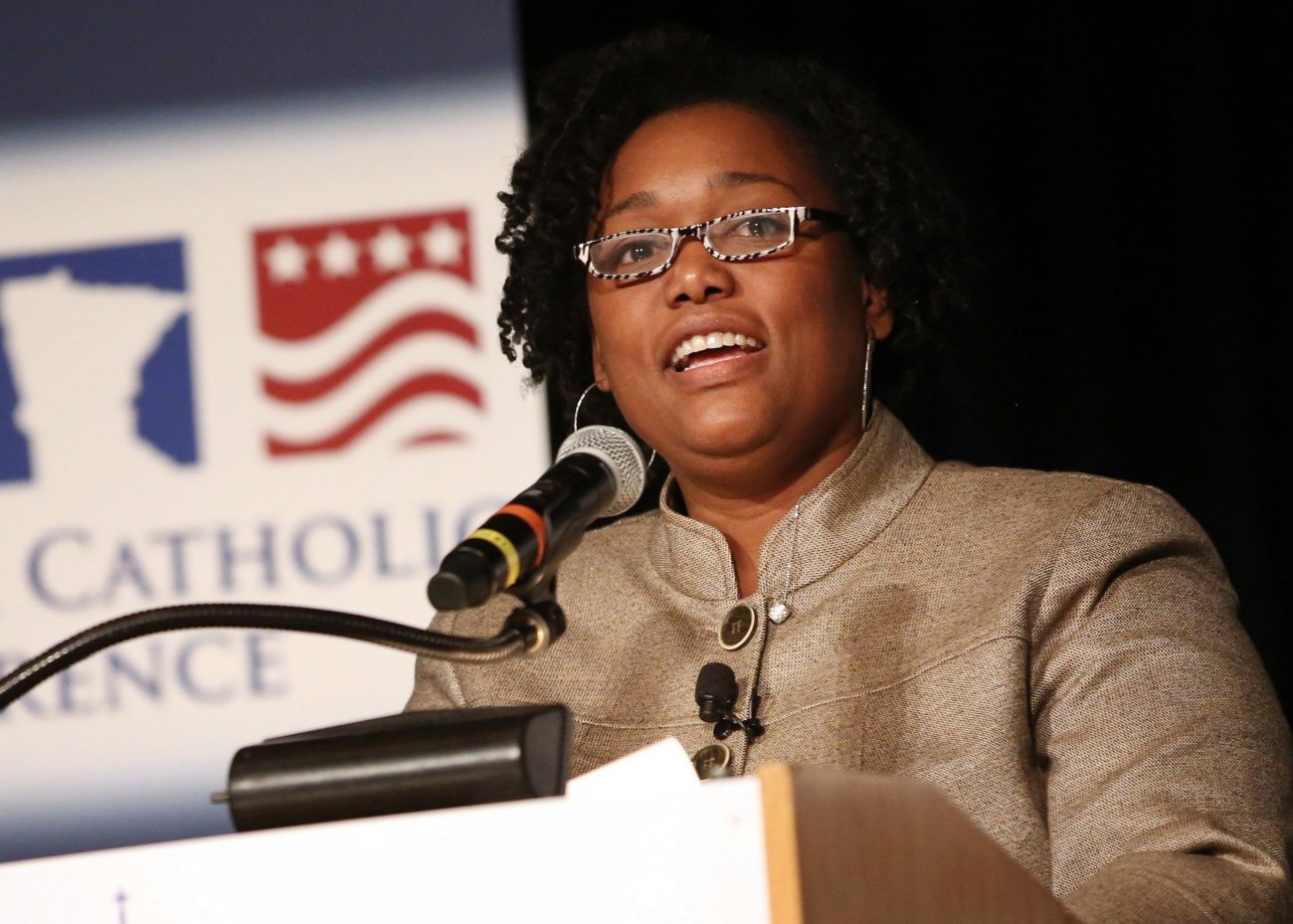 Gloria Purvis is seen in this 2017 file photo. She will be the host of a new weekly podcast with America Media which was announced May 11, 2021. (CNS photo/Dave Hrbacek, The Catholic Spirit)

WASHINGTON (CNS) — Gloria Purvis has been interviewed on a lot of podcasts, but she has never hosted a podcast herself.

Purvis, whose weekday radio show “Morning Glory” was abruptly canceled without notice by EWTN last December, is launching a new podcast in May via America Media, the Jesuit communications ministry that includes America magazine.

New installments of “The Gloria Purvis Podcast” will be posted weekly, although neither Purvis nor America Media had a launch date set at the time of the May 11 announcement. The podcast will be available via Apple Podcasts, Google Podcasts, Spotify, Amazon Music and other podcast apps.

Purvis’ quick and easy laughter, on display several times during a May 10 interview with Catholic News Service, belies any bitterness she might feel over her rushed departure from the EWTN airwaves.

Purvis also served as lector at the Mass in January that opened the annual National Prayer Vigil for Life, a role she’s taken on in the past. “It was me, it was me. I noticed my name wasn’t shown, either,” she said, laughing, since EWTN televises the Mass. She added she had been asked to proclaim Scripture at the Mass well before her show was canceled.

The length of the podcast, Purvis said, “depends how good the interviews are,” throwing in a hearty laugh, and “what’s in the news. It could be up to an hour, sure. But no more than that, I don’t think — unless something’s really hot!”

Although Purvis told CNS that she can’t recall when she first was in conversations with America Media about a podcast, she said: “It’s been a while talking things through. They were very clear that they just want me to be me, and say what I want to say, amplify my voice.” Unlike with “Morning Glory,” Purvis won’t have a co-host.

Purvis said the podcast’s topics and perspectives will include “things that people don’t necessarily hear, and they may recognize,” hinting that it’s “something they may want to tune in to.”

She may have a ready-made audience from her EWTN days. “No doubt,” Purvis said. “I can’t tell you how many emails and private messages I get: ‘Please let me know where you go next so I can tune in,’ and stuff like that.”

Purvis added she likes the “flexibility” offered in podcasts, “that people can listen whenever they want, once we push it out to them. Granted, people can do that if a radio show is podcasted, but a lot of people listen to just podcasts only, even when they’re in their cars.”

While the prospect of a podcast sounds like fun, to Purvis there’s still work involved. “It takes time to produce a podcast. I don’t just walk into the interview unprepared. I’m going to read up on whoever it is,” she said. “It takes prep to do each podcast. It takes time.”

And, in case anyone was wondering, Purvis continues to have no regrets talking about race during her EWTN tenure, which some suspect got her booted.

“You can’t not talk about something that’s a grave evil and that’s right now in the national spotlight,” Purvis said. “And so many of my co-religionists being confused … unable to use the lens of our faith to navigate this. I think it’s all the devil. … The devil has appealed to people’s desire for temporal power to seduce them.”

“We have to remain faithful in prayer and close to the sacraments when they’re available — and also be humble and recognize we can be misled about secular voices –and unfortunately, maybe people in the church who should know better,” Purvis said. “We tell people about sin, but we need to do that introspection ourselves as well,” she added.

“It’s that little bit of pride. We’re fallen creatures and we need God’s grace and be thankful, actually, when any of that — sins we were blind to — be grateful when our conscience is pricked.”