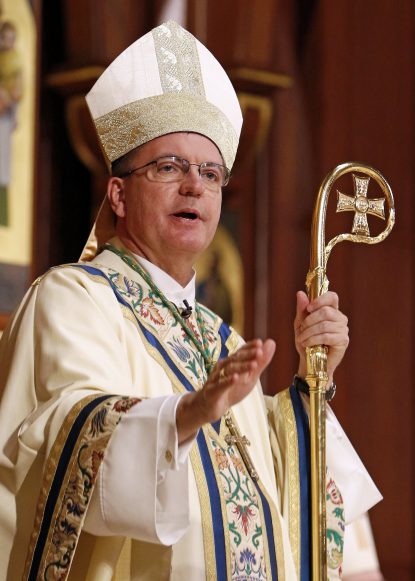 ROCKVILLE CENTRE, N.Y. (CNS) — Bishop John O. Barres of Rockville Centre is inviting Catholics in the diocese to participate in activities marking the Ignatian Year to celebrate the life and teachings of St. Ignatius of Loyola.

“St. Ignatius stands among the great saints in the breadth and depth of his contributions as well as his witness and effects upon the life of the Catholic Church that continue centuries after his death,” Bishop Barres wrote in a pastoral letter about the special year, which opens May 20 and runs to July 31, 2022.

The letter, released May 3, invites people to explore the life and legacy of the saint, who was a founder of the Society of Jesus and whose theological and spiritual contributions continue to influence Catholics and other people of faith.

Jesuit Father Arturo Sosa, superior general of the order, called for an Ignatian Year to mark the saint’s conversion. The period starts on the 500th anniversary of Ignatius, as a soldier, being injured by a cannonball during the Battle of Pamplona, Spain.

Ignatius spent months in bed recuperating and reading about Jesus and the lives of saints. He decided he wanted to be one of them, laid down his sword, gave away his belongings and set off on a journey to discern God’s will for his life.

The year ends on the saint’s feast day, which also is the anniversary of his death in 1556 at age 64.

(See a related story on the launch of the Ignatian Year.)

Bishop Barres cited the Jesuits’ contributions to education and scholarship in his pastoral letter, pointing to the network of high schools and dozens of universities the order overseas in the U.S. He noted the Society of Jesus, with about 15,000 members worldwide, is the largest religious order of men in the world.

The letter noted that Jesuits take a vow of “total availability to the pope, the successor of Peter.”

“This vow of total availability to the Roman pontiff disposes the order for its characteristic missionary activity,” the letter said, citing Pope Benedict XVI, who calls Jesuits “in the most genuine Ignatian spirit of ‘feeling with the church and in the church — to love and serve’ the vicar of Christ on earth.”

Several Rockville Centre diocesan priests are working on reflections that explore the saint’s life that “will connect the Ignatian legacy with our legacy in 2021,” Bishop Barres wrote. They will be available through various sources within the diocese.

In addition, the bishop’s program on the Catholic Faith Network, “Encounter,” will feature Jesuit theologians and historians who will discuss St. Ignatius’ life, mysticism, missionary spirit and continuing influence within the Catholic Church, according to the letter.

Bishop Barres also asked people to pray that the church recognizes St. Ignatius as a doctor of the church. The Vatican Congregation for Divine Worship describes such a designation as someone who exemplifies the “link between holiness and understanding things divine and also human.”

St. Ignatius and six companions founded the Society of Jesus, which received the approval of Pope Paul III in 1540. Ignatius was canonized March 12, 1622, along with St. Francis Xavier, a fellow Jesuit.

Special observances are planned for the 400th anniversary of the canonization in March 2022.

Concluding the letter, Bishop Barres said Catholics today, like St. Ignatius, “have been experiencing cannonball-like wounds from the suffering brought about by COVID-19.”

“It is my prayer that through these reflections, like St. Ignatius, whose life was transformed upon reading those books about Jesus and the saints, the Lord will heal our wounds and lead us all to conversion experiences that focus our lives and the mission of the church for the greater glory of God,” he wrote.

NEXT: High court to hear major abortion case from Mississippi