Mercy sisters join other women religious in helping at the border

Mercy Sisters Terry Saetta, far left, and Sister Patricia Mulderick, far right, pose for a photo May 7, 2021, at the “respite center” in McAllen, Texas, where they volunteered to help migrants. Both heeded a call in early May from the Leadership Conference of Women Religious, who asked members to help minister to migrants near the U.S.-Mexico border. (CNS photo/courtesy Sisters of Mercy)

In early May, the Leadership Conference of Women Religious asked members for urgent help in ministering to migrants when families, minors and others were increasingly coming across cities and towns close to the U.S.-Mexico border.

Mercy Sister Patricia Mulderick, who’d had previous experience in advocacy work on behalf of migrants and experience in Latin America, was one of several women religious who answered the call.

One of the places she chose to volunteer was the “respite center” run by Catholic Charities of the Rio Grande Valley in McAllen, Texas, a type of ground-zero in the current immigration debate, which has been the backdrop for welcome as well as rejection of migrants cutting across the nearby border.

“As Sisters of Mercy, we joined with volunteers from all over the USA, religious and lay, who come to be that welcoming presence for those who are tired, poor and yearning at the Mexican-American border,” Sister Mulderick wrote in a joint letter with Mercy Sister Terry Saetta, who also volunteered at the center in May.

From handing out clothes, food and sometimes just providing a friendly ear, the sisters put into action one of the main missions of LCWR, the largest organization for women religious in the country: “to collaboratively carry out their service of leadership to further the mission of the Gospel in today’s world.”

Working side by side with members of other congregations, the sisters were able form a community of their own, one in which they could discuss with other women religious themes related to immigration even after they left the region.

They worked with Sisters of St. Joseph, Dominican sisters, Franciscan sisters, among others, but “all coming to volunteer, it’s kind of you’re all in this together,” Mulderick said.

Even in tough moments, when some of them witnessed the hardship of migrants who had arrived damp after the river crossing, confused or just needing basics to survive, the experience affected some of the sisters more than others.

The community of women religious, though from different orders, helped “create camaraderie,” collaboration, and a sense of empathy and support for those who hadn’t before handled situations such as the one they witnessed and sometimes brought with it tears, Sister Mulderick said.

Along with Sister Saetta, Sister Mulderick wrote down impressions and sights and sounds they experienced in their time at the respite center.

“As these people from many different countries walk through the Respite Center’s many doors, they stop at security to get their temperatures and credentials checked,” they wrote. “One room is filled with chairs of people clutching their documents and waiting to be helped regarding the next leg of their journey.

“Tired and anxious, yet somewhat relieved. Young children run around, some in bare feet and diapers until they can get other clothes donated by generous people wanting to help in some way. Like salve for body and soul! They get shampoo, soap and other essentials … also donated by others.”

In a May 19 interview with Catholic News Service, Sister Mulderick said something as simple as giving someone a toothbrush elicited a hug and tears from one of the migrants.

“I thought, you know, there’s something more essential here than the little things that are in this bag. It was the welcome,” she said. “And so, the center I think, the respite center, is so well named because it’s this respite in between the long journey to the (United) States.”

The help that the sisters were able to provide the migrants, she said, wasn’t to solve their problems, whatever those might be, but just to be with them in a particular moment.

“It’s just being with people in their most vulnerable moment,” Sister Mulderick told CNS. “Maybe they’ve been weeks or months or a year in those camps in Mexico … so they they just finally come to a place where someone says ‘welcome.'”

In the evenings, the Mercy sisters gathered to pray by name for those they had met and talked about their experiences with the migrants.

Out of those discussions, they got the idea to print out cards in Spanish that said, “Remember, you’re special. God is with you,” as well as, “Have courage, keep going. Don’t be afraid. I’m with you on this journey.”

Sister Mulderick said she was aware that even some Catholics wouldn’t agree with the work of helping migrants, but that for those occasions, she keeps a message on her dresser that says: “No matter what the question, love is the answer.”

“I think that goes with Jesus’ command to love one another as we have been loved,” she said. “You welcome me when you welcome the least of my brothers and sisters. I don’t know how much clearer that can get. I mean, we can all disagree with policy but when you stare in the face of people, flesh and blood, love is the only answer. Rejection is for me not an option.” 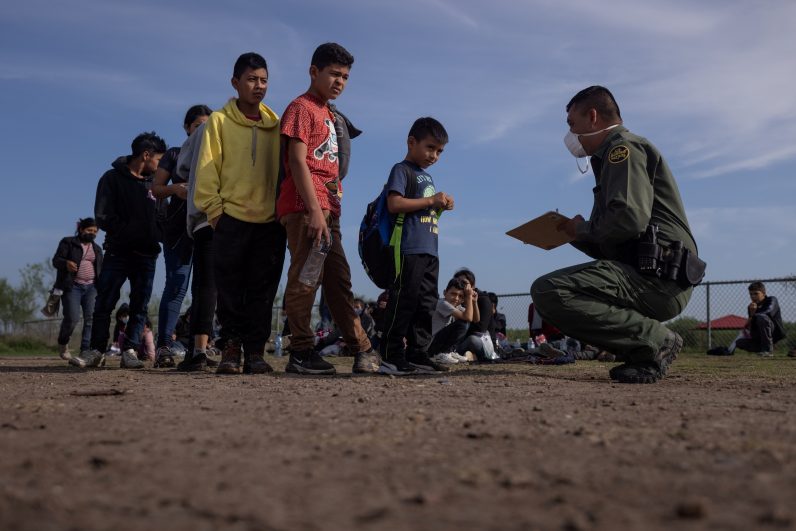 Anderson, a 6-year-old unaccompanied minor from El Salvador, stands in line with other asylum-seeking children in La Joya, Texas, May 14, 2021, as they identify themselves to a Border Patrol agent after crossing the Rio Grande from Mexico. (CNS photo/Adrees Latif, Reuters)