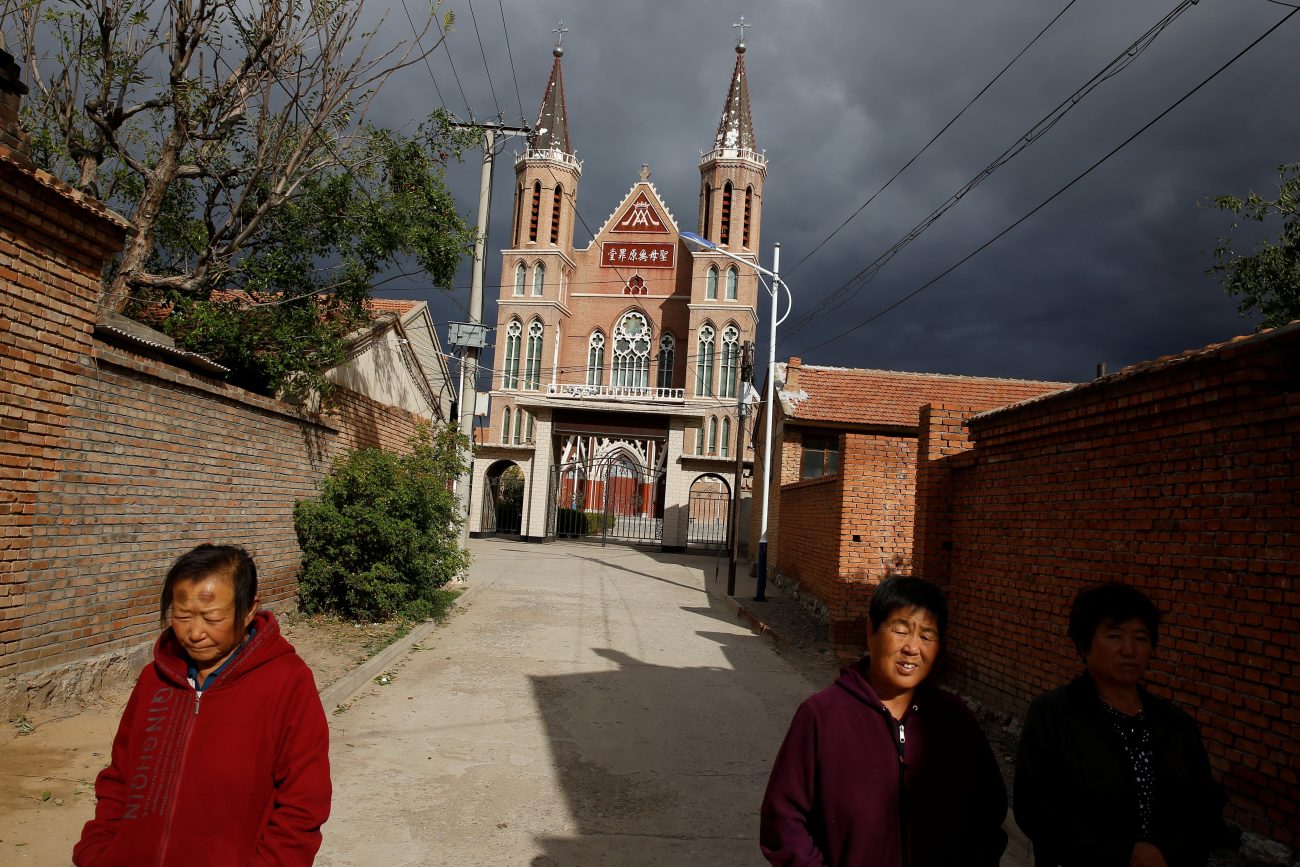 Villagers are pictured in a 2018 photo walking near a Catholic church in Huangtugang, China. (CNS photo/Thomas Peter, Reuters)

HONG KONG (CNS) — Authorities in northern China have arrested a Vatican-appointed Catholic bishop, his seven priests and 10 seminarians in what is seen as part of a renewed crackdown on the underground Catholic Church in the communist country.

Ucanews.com reported police arrested 63-year-old Bishop Joseph Zhang Weizhu of Xinxiang May 21, a day after they detained the priests and seminarians for allegedly violating the country’s new regulations on religious affairs.

Chinese authorities have not recognized the Xinxiang Diocese ever since the Vatican erected it in 1946 during the civil war leading to the Chinese Communist Revolution in 1949.

Bishop Zhang, appointed by the Vatican, was ordained secretly in 1991. His appointment by the Vatican was not approved by the state-aligned Bishops’ Conference of the Catholic Church in China and the Chinese Catholic Patriotic Association, ucanews.com reported.

China implemented a new set of rules for religious clergy that took effect this May. It asks all clergy to register with the state in order to serve Catholics while asking Catholics to elect their bishops democratically.

In 2018, China and the Vatican signed a two-year provisional agreement on the appointment of bishops; the Vatican said the aim was to unify the Catholic Church. The agreement was renewed in 2020.

At the time the agreement was signed, Pope Francis regularized the situation of seven bishops who had been ordained without Vatican approval. No mention was made of the situation of so-called underground bishops, those who refused to register with the Chinese government.

After the provisional agreement was signed in 2018, Anthony Lam Sui-ki, a senior researcher at the Holy Spirit Study Centre of Hong Kong, suggested a transition period was needed for Catholics from underground communities so that they can adapt to the new environment.

Lam, who said he did not know details of the agreement, pointed out that now-retired Pope Benedict XVI once described the underground church community in China as an unusual phenomenon, and now Pope Francis would ask underground communities “to surface” after a proper arrangement is made by the Chinese government.

Ucanews.com reported some Chinese Catholics say the new government regulations aim to end the underground church by criminalizing and arresting its clergy as they work outside the state-approved database of the clergy.

Bishop Zhang, who heads the diocese of 100,000 Catholics, was not approved by the state-run church even after the Sino-Vatican deal was signed. He has been continuously under pressure from state authorities and was arrested on several occasions but later released.

Local Catholics said a government-appointed administrator has run the diocese since 2010 and reports to the state directly. The bishop is not allowed to manage diocesan finances and resources.

The arrests came after the diocese decided to use an abandoned factory building as a seminary. Church authorities were accused of violating government rules, ucanews.com reported.

Media reports claimed about 100 policemen surrounded the building the day before Bishop Zhang was arrested. While the police deployment continues, a manhunt is underway to search for other seminarians who allegedly fled to avoid arrests.

The crackdown in Xinxiang comes at a time when Pope Francis has called on Catholics worldwide to pray for Christians in China as they celebrated on May 24 the feast of Mary, Help of Christians, and patroness of the country.

“The Mother of the Lord and of the church is venerated with particular devotion in the Sheshan shrine in Shanghai and is invoked assiduously by Christian families in the trials and hopes of daily life,” the pope said.

Catholics in mainland China have the tradition of making a pilgrimage every year to pray at the Sheshan shrine, the country’s most famous Marian shrine, especially around May 24.

In recent years, authorities have placed many obstacles in front of pilgrims, and this year they have prevented any visit there during the month of May, citing the coronavirus pandemic, even though amusement parks in the area are open.

NEXT: Pope asks all Catholics to commit to saving creation