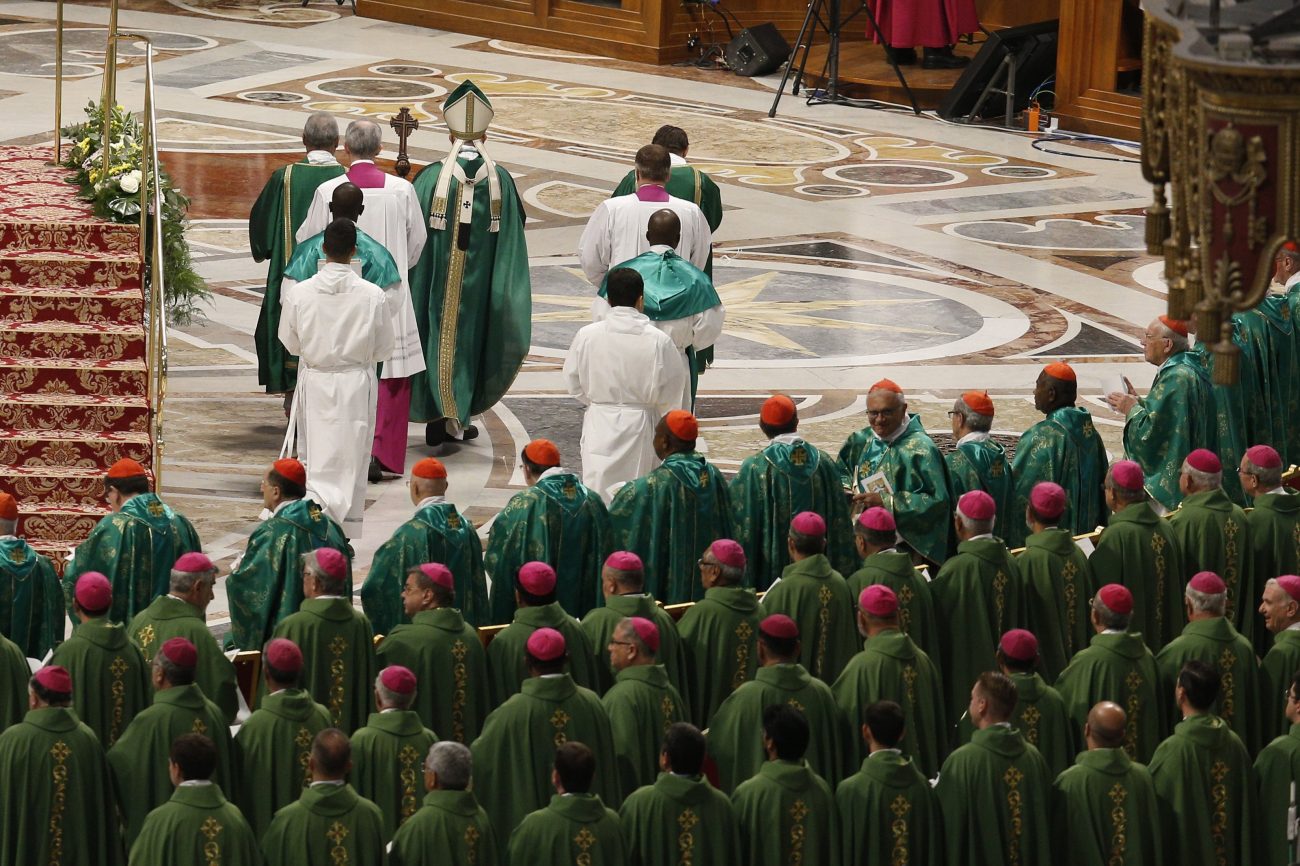 Cardinals and bishop are seen as Pope Francis arrives to celebrate the concluding Mass of the Synod of Bishops for the Amazon at the Vatican in this Oct. 27, 2019, file photo. The pope has approved a revision of the process for the celebrations of the Synod of Bishops, emphasizing the need to expand reflections and consultations on a diocesan level. (CNS photo/Paul Haring)

VATICAN CITY (CNS) — Approving the revision of the entire process of the Synod of Bishops, Pope Francis has asked that it begin with serious, widespread consultations with laypeople on the diocesan level.

“In reality, without this consultation there would be no synodal process, because the discernment of pastors, which constitutes the second phase, emerges from listening to the people of God,” Cardinal Mario Grech, secretary-general of the Synod of Bishops, told Vatican News May 21.

The cardinal’s office issued a statement that day explaining how the next general assembly of the Synod of Bishops would work, noting that the broader consultation on the diocesan, national and regional levels would mean that the gathering of representative bishops from around the world would take place at the Vatican in October 2023 rather than in 2022, as previously scheduled.

The theme chosen by Pope Francis for the gathering is: “For a synodal church: communion, participation and mission.”

The pope will formally open the synod process at the Vatican Oct. 9-10 this year, the synod office said. And the bishop of every diocese will open the process in his diocese Oct. 17.

The diocesan phase will go through April 2022, featuring a consultation with local Catholics discussing a preparatory document and questionnaire that the synod office will send out along with guidelines for how the consultation should work.

“For a long time, there was talk of communion as a constitutive element of the church,” Cardinal Grech told Vatican News. “Today it is clear that this communion is either synodal or it is not communion at all.”

However, he said, for there to be true communion within the church everyone must participate, “each according to his or her own function: people of God, College of Bishops, bishop of Rome.”

“Perhaps in the past there has been so much insistence on the ‘communio hierarchica’ (communion of the hierarchy) that there arose the idea that unity in the church could only be achieved by strengthening the authority of pastors,” Cardinal Grech said.

While that may be an important emphasis when faced with dissent, “that cannot be the ordinary way of living ecclesial communion, which requires circularity, reciprocity, journeying together with respect to the various functions of the people of God.”

“The Second Vatican Council teaches that the people of God participate in the prophetic office of Christ,” he said. “Therefore, we must listen to the people of God, and this means going out to the local churches.”

“The governing principle of this consultation of the people of God is contained in the ancient principle ‘that which touches upon all must be approved by all’ — ‘Quod omnes tangit ab omnibus approbari debet,'” the cardinal said. “This is not about democracy, or populism or anything like that. Rather, it is the church that as the people of God, a people who by virtue of baptism, is an active subject in the life and mission of the church.”

Listening to every Catholic is “the true ‘pastoral conversion’ of the church,” Cardinal Grech said. “God willing, one of the fruits of the synod is that we might all understand that a decision-making process in the church always begins with listening, because only in this way can we understand how and where the Spirit wants to lead the church.”

Once the diocesan consultations have concluded, members of national bishops’ conferences should have “a period of discernment” so they can “listen to what the Spirit has inspired in the churches entrusted to them.” A synthesis of that reflection should be sent to the Vatican’s synod secretariat by April 2022.

All the listening sessions and discernment are meant to assist participants, mainly bishops, who will meet at the general assembly of the synod in October 2023, the cardinal said.

“We must not forget that the moment of discernment is entrusted above all to those bishops who are gathered in the assembly,” he said.

“Some may say that this is clericalism,” the cardinal said, but it is not, because in the church, bishops have “a function of discernment, which belongs to them because of the ministry they carry out for the good of the church.”

“The strength” of the new process, he said, is found “in the reciprocity between consultation and discernment. There lies the fruitful principle that can lead to furthering development of synodality, of the synodal church and of the Synod of Bishops.”

NEXT: Pope calls for prayers for forgiveness, coexistence in Holy Land