Venezuela’s ‘doctor of the poor’ beatified in austere ceremony 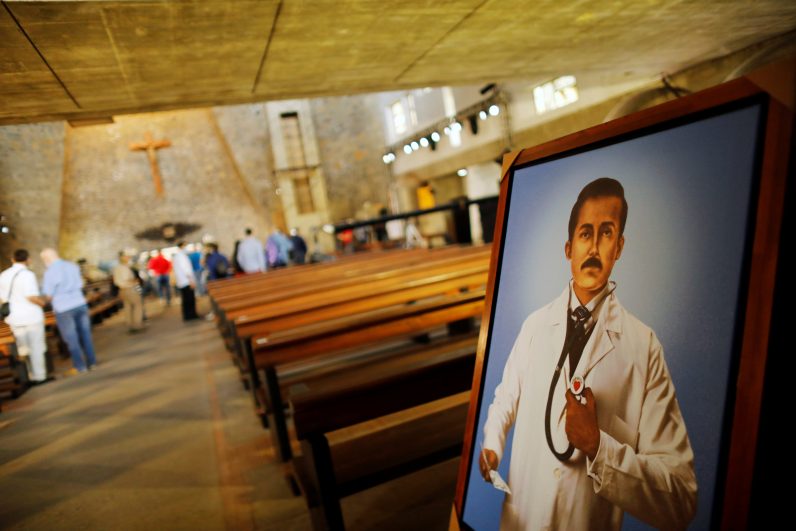 A painting of José Gregorio Hernández is displayed by the main door at the Church of Colegio La Salle in Caracas, Venezuela, April 28, 2021, during preparations for his April 30 beatification. Hernández was a Venezuelan doctor known for treating hundreds of poor patients for free and who died in 1919. (CNS photo/Leonardo Fernandez Viloria, Reuters)

BOGOTÁ, Colombia (CNS) — A Venezuelan doctor who treated patients during the Spanish flu pandemic and was one of the first to introduce microscopes to his nation’s hospitals was beatified April 30 in an austere ceremony held in Caracas, the city where he spent much of his life tending to the sick.

Blessed José Gregorio Hernández led a pious life marked by science, faith and public service. He was a founding member of Venezuela’s academy of medicine and tried unsuccessfully to become a priest. Along with his colleagues, Blessed Hernández resisted a dictator’s plans to shut down a university in Venezuela at the turn of the 20th century, while introducing the study of pathological anatomy.

But Blessed Hernández was known most of all for being a kind doctor who refused to charge his poorest patients for his services and served people from all walks of life. He died in 1919 after being hit by a car while on his way to taking free medicine to an elderly patient.

“In his person you can find a great doctor, a scientist, a professor. And at the same time, humility, the rejection of arrogance and dedication to the poor,” said Archbishop Aldo Giordano, Vatican ambassador to Venezuela, during his homily at the beatification Mass.

“This is the logic of the Gospel. And Venezuela’s future depends on people who are capable of living with that same kind of logic,” the archbishop said.

The beatification Mass was held at a church in a Catholic school and, due to COVID-19 restrictions, was attended by fewer than 200 people; it was broadcast on national television in Venezuela. Earlier, churches around the country rang their bells in unison to celebrate Blessed Hernández’s life as he took one step closer to sainthood.

Venezuelan Cardinal Baltazar Porras pointed out that when Blessed Hernández died in 1919, 30,000 people — about 1% of Venezuela’s entire population at that time — attended his funeral procession in Caracas. 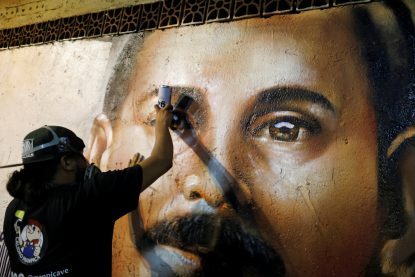 Venezuelan street artist Badsura paints an image of José Gregorio Hernández on a wall in Caracas April 28, 2021, in preparation for his April 30 beatification. Hernández was a Venezuelan doctor known for treating hundreds of poor patients for free and who died in 1919. (CNS photo/Leonardo Fernandez Viloria, Reuters)

“The people who cried over him at his funeral soon discovered he was not really gone,” the cardinal said at the Mass, where a large mosaic of Blessed Hernández’s face was unveiled by one of his descendants. “He will keep on living to relieve us of our pains and cure our illnesses.”

The doctor’s reputation as a healer has endured after his death, and for decades Venezuelans have prayed to him for good health.

Statuettes and photographs depicting Blessed Hernández in his moustache and bowler can be found at shops and homes throughout the country, and devotion to “the doctor of the poor” has spread to Colombia, Mexico and other Latin American countries.

“People have a lot of faith in him,” said Dr. Leopoldo Briceño, a pediatric surgeon from Caracas who used to lead the country’s national academy of medicine. “When people are very ill, you’ll see them putting an image of him on their hospital beds.”

Many Venezuelans credit Blessed Hernández with saving them from near-death situations.

In 2017, a commission led by the Venezuelan bishops conference examined the case of a girl in a rural area. She recovered inexplicably from a bullet wound in her head, after her mother sought Blessed Hernández’s intervention.

After a commission of doctors and members of the church determined that there was no scientific explanation for the girl’s recovery, her cure was approved as a miracle, and the beatification of Blessed Hernández was approved.

The honor comes as Venezuela struggles to overcome the pandemic.

Data about case numbers and deaths is unclear in the country, where hospitals have been decimated by years of economic mismanagement followed by U.S. sanctions. More than 5 million people have left the country since 2014.

The government of President Nicolás Maduro has been reluctant to purchase AstraZeneca vaccines from the World Health Organization’s COVAX platform, citing concerns about possible side effects.

Critics say the government is stalling on vaccine purchases because it lacks the money or only wants to work with political allies like Russia, from which it has gotten some shots. Venezuela’s opposition has offered to pay for some of the vaccines, but negotiations with the government have not succeeded.

Archbishop Giordano prayed that Blessed Hernández would “intercede so that access to vaccines can be achieved together without divisions or resistance.”

PREVIOUS: Cardinal Burke, seven others rise in rank in College of Cardinals

NEXT: Pope approves canonizations, but no date set because of pandemic