Cardinal Burke, seven others rise in rank in College of Cardinals 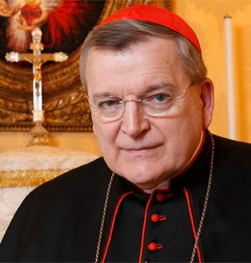 According to the Code of Canon Law, “through a choice made in consistory and approved by the Supreme Pontiff,” cardinals can move “from the diaconal order to another diaconia and if they have been in the diaconal order for 10 full years, even to the presbyteral order.”

The ranking and the date on which the prelate entered the College of Cardinals determines seniority and the cardinal’s place in processions and seating arrangements.

In addition to Cardinal Burke, those become cardinal priests at the consistory May 3 were:

— Cardinal Robert Sarah, retired prefect of the Congregation for Divine Worship and the Sacraments.

— Cardinal Francesco Monterisi, retired archpriest of the Basilica of St. Paul Outside the Walls.

— Cardinal Gianfranco Ravasi, president of the Pontifical Council for Culture.

PREVIOUS: In times of trouble, church turns to prayer with Mary, theologian says

NEXT: Venezuela’s ‘doctor of the poor’ beatified in austere ceremony