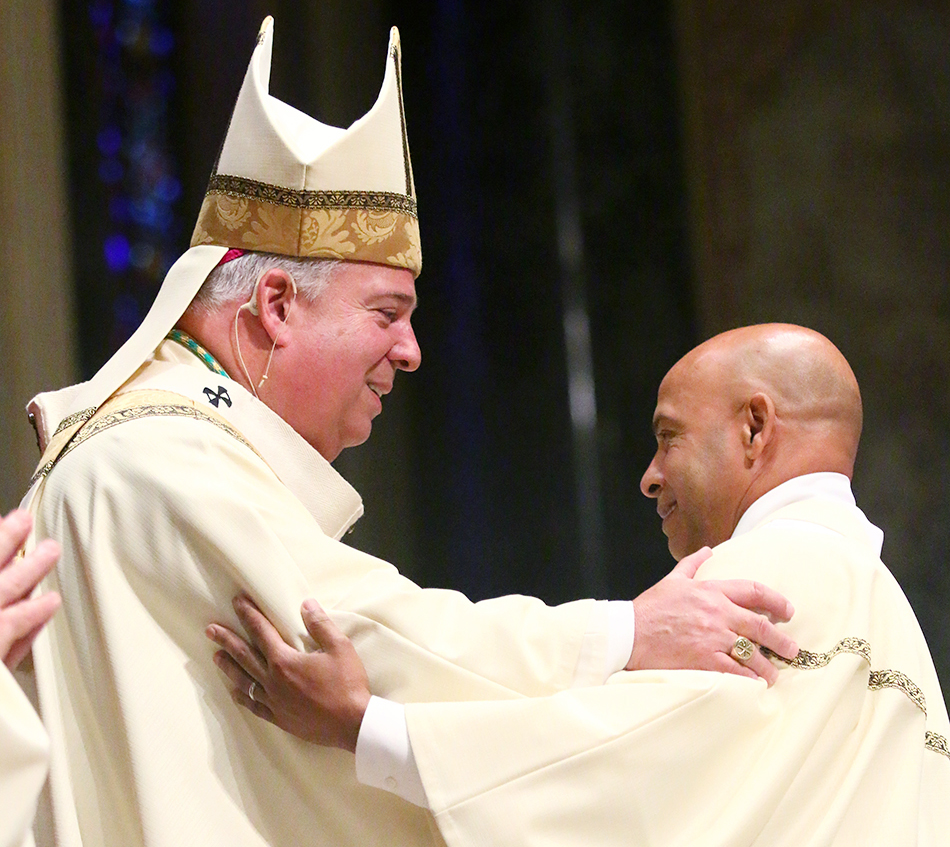 Archbishop Nelson J. Pérez embraces newly ordained permanent Deacon Pascual Mota during a June 11 liturgy at the Cathedral Basilica of SS. Peter and Paul. A month prior to his ordination, Deacon Mota and his family lost their home in a devastating fire that ultimately intensified his desire to serve his parish community. (Sarah Webb)

A month before Archbishop Nelson Pérez ordained him a permanent deacon, Pascual Mota stood in a Northeast Philadelphia park on a rainy Sunday evening – and watched as flames destroyed his house.

Five years earlier, Mota and his wife had purchased the former St. Leo Parish rectory and, along with their children Isabela, Pascual Jr. and Miguelangel, had made it their family home. St. Leo had merged in 2013 with nearby Our Lady of Consolation, and its church remained open as a worship site until 2018.

While helping to launch a Spanish-speaking ministry at St. Leo for the merged parish, Mota – a computer systems engineer – began to discern a call to the diaconate.

And just as the early church’s first deacons were ordained in response to a practical concern (Acts 6:1-7), Mota’s vocation was prompted by a pastoral challenge.

“When we started the Spanish ministry at St. Leo, (we) struggled to find priest or deacons in Philadelphia that could preach in Spanish,” he said. “God allowed me to see the need, and it moved me.”

Mota eventually entered the diaconal formation program at St. Charles Borremeo Seminary in Wynnewood, and when the St. Leo site was closed in 2018, continued the Spanish ministry at Our Lady of Consolation.

As Mota approached his ordination, the parish sold the former St. Leo church building due to high maintenance costs. The New York-based developer who had purchased the property said he planned to lease it to either another congregation or a performing arts group.

But a May 9 fire destroyed the beloved former church, spreading to Mota’s home and causing extensive damage. The blaze was ruled an arson by local and federal officials, who are continuing their investigation.

The parish and the wider community immediately rallied around the displaced family, holding fundraisers and lifting them up in prayer.

Far from faith-shaking, the traumatic experience proved to be what Mota terms “a love story.”

“It was the best retreat I ever had,” he said. “I knew I loved my community, but did not know how much they loved me, until now.”

Ordained June 12, permanent Deacon Mota “can’t wait to serve” those who “came together for (his) family.”

“We are overwhelmingly grateful for their expression of love, and we want to pass it on,” he said.

He’ll do just that as he assists Archbishop Pérez at a June 19 Mass of healing that will be celebrated in the park across from the ruins of St. Leo Church – and like the archbishop, Deacon Mota will bring a message of hope to those present.

“My family strongly believes that nothing happens without God allowing it,” he said. “The Lord brings good from evil, and he always takes care of his people, even if we cannot see it.”

NEXT: Frazzled as a father? It’s OK to ask for help in being a dad, says social worker