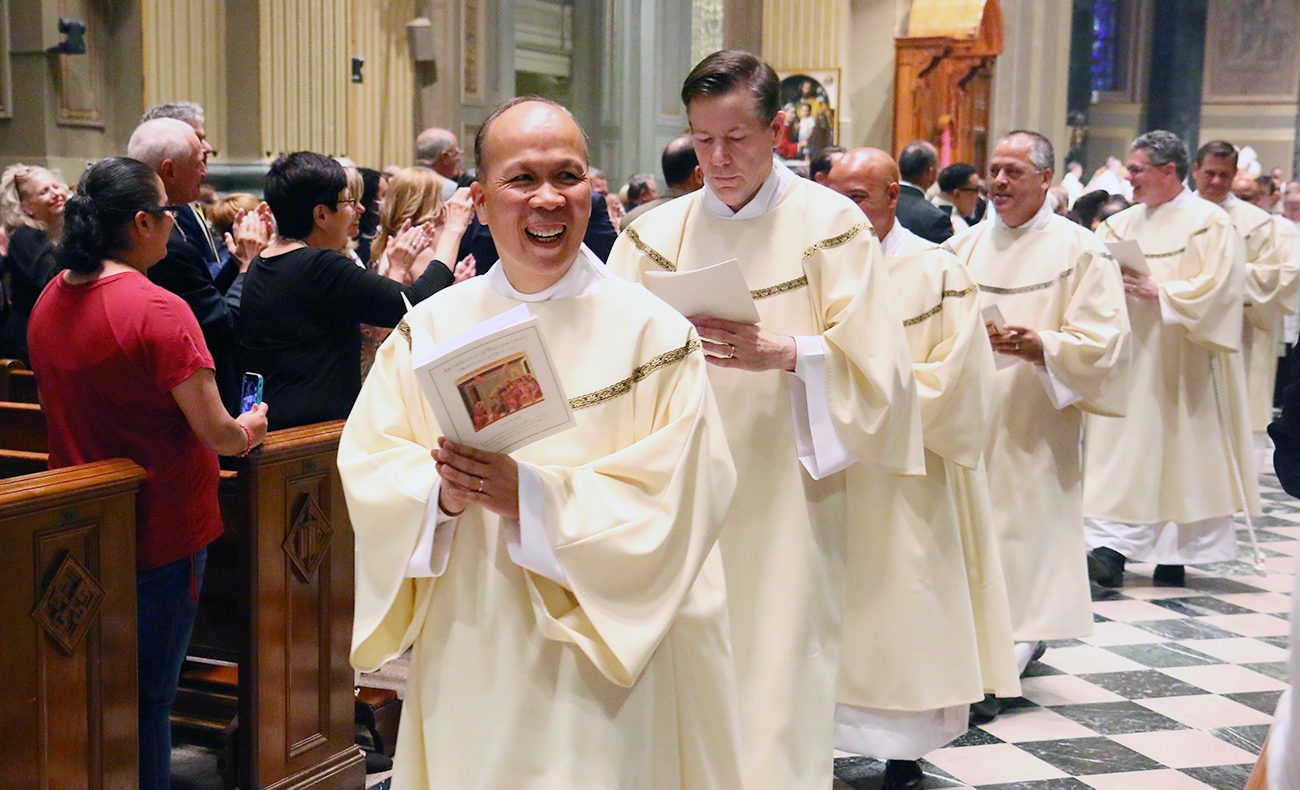 Newly ordained permanent Deacons Diep T. Nguyen and James J. White IV process with fellow deacons after a June 12 ordination Mass at the Cathedral Basilica of SS. Peter and Paul, at which celebrant Archbishop Nelson Pérez described permanent deacons as ministers of the church among "the family, the workplace and the neighborhood." (Sarah Webb)

Nine men were ordained to the permanent diaconate Saturday, June 12 on what Archbishop Nelson J. Pérez called “a great day of blessing for the church in Philadelphia.”

With COVID restrictions lifted in the city, hundreds filled the Cathedral Basilica of SS. Peter and Paul for the June 12 liturgy, at which Archbishop Pérez presided, assisted by his four auxiliary bishops along with dozens of archdiocesan priests and permanent deacons.

Also concelebrating the Mass was Auxiliary Bishop Joseph Coffey, Vicar for Veterans Affairs in the U.S.’s Archdiocese for the Military Services and a former Philadelphia priest.

Kneeling, each promised “respect and obedience” to Archbishop Pérez and his successors, and then lay prostrate before the altar as the litany of supplication was chanted. Placing his hands on the heads of the candidates, the archbishop silently prayed the prayer of ordination, after which the deacons were vested with their stoles (a narrow sash worn by deacons over the left shoulder for Mass and other liturgical ceremonies) and dalmatics (outer vestments similar to priests’ chasubles). As the deacons knelt once again, the archbishop placed the Book of the Gospels in the hands of each, and then — along with several of the current deacons — bestowed on the men a fraternal kiss.

As husbands, fathers and professionals, permanent deacons are “ministers of the church present in the world of the family … the workplace and in (their) neighborhood,” said the archbishop. 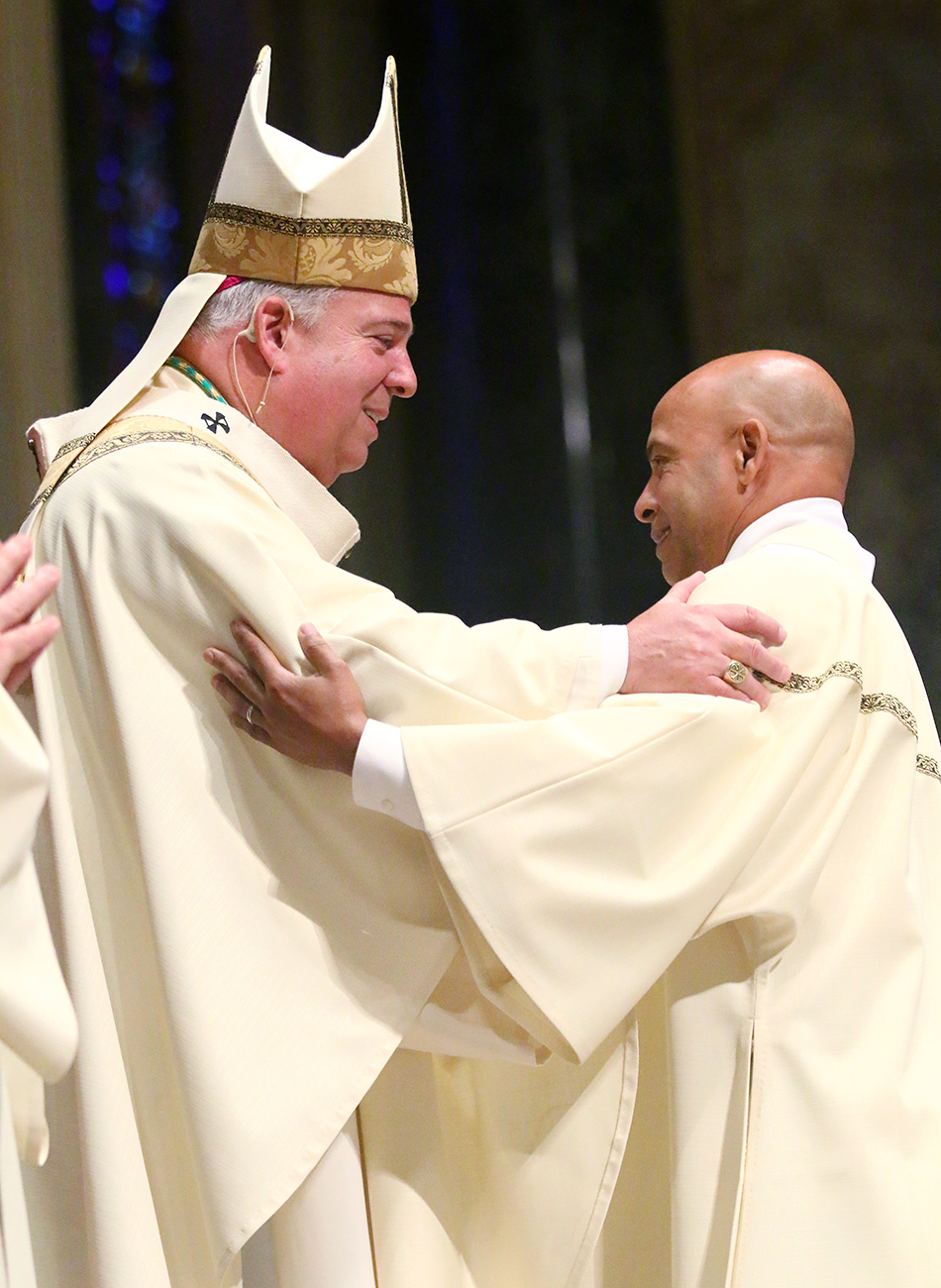 Although they will serve in their assigned parishes, those ordained will in fact “spend most of (their) diaconate among family and friends and neighbors, and those (they) serve in their jobs,” he said, encouraging the men to ask themselves, “How am I a deacon there?”

Deacon White observed that the callings to ministry, marriage, family life and career enrich each other.

“These various roles allow me to better relate to the laity,” he said, adding the permanent diaconate has “actually informed and strengthened (his) roles as father, husband and business leader.”

For married permanent deacons, spouses are an integral part of the discernment and formation process, as well as the ministry itself, said the archbishop.

“Trust me, you would not be here if it weren’t for them,” said Archbishop Pérez, commending the women’s “willingness and generosity of heart to share (their husbands) with the wider church.”

In the Philadelphia Archdiocese, the diaconate formation process at St. Charles Borromeo Seminary spans seven years of study and development in four key dimensions specified by the church: spiritual, intellectual, human and pastoral. Married candidates must ensure their wives’ informed, written consent at each step in the program.

“The commitment that you put into the formation is significant,” said Deacon Franz Fruehwald of Queen of Peace Parish in Ardsley and chief financial officer for archdiocesan Catholic Human Services.

Amid family life and work obligations, the path to ordination “is a long road” on which “the struggles of real life can show up,” said permanent Deacon Anthony Willoughby, now in his third year at St. Cyprian Parish in Philadelphia and a full-time operations manager at St. John’s Hospice, an archdiocesan Catholic Social Services outreach to men experiencing homelessness.

Deacon Mota knows firsthand how the unexpected can arise on the path to the altar: one month before the ordination liturgy, he and his family lost their home in a devastating blaze that destroyed the former St. Leo Church in Northeast Philadelphia.

Heartened by the outpouring of parish and community support, Deacon Mota said he “can’t wait to serve” those who “came together for (his) family.”

The moments capping the journey to ordination actually marked “just the beginning” of a life of service, said Archbishop Pérez, exhorting the men to ask in their assigned parishes, “Where are the widows and the orphans?” and not only “Where is the altar and the pulpit?” 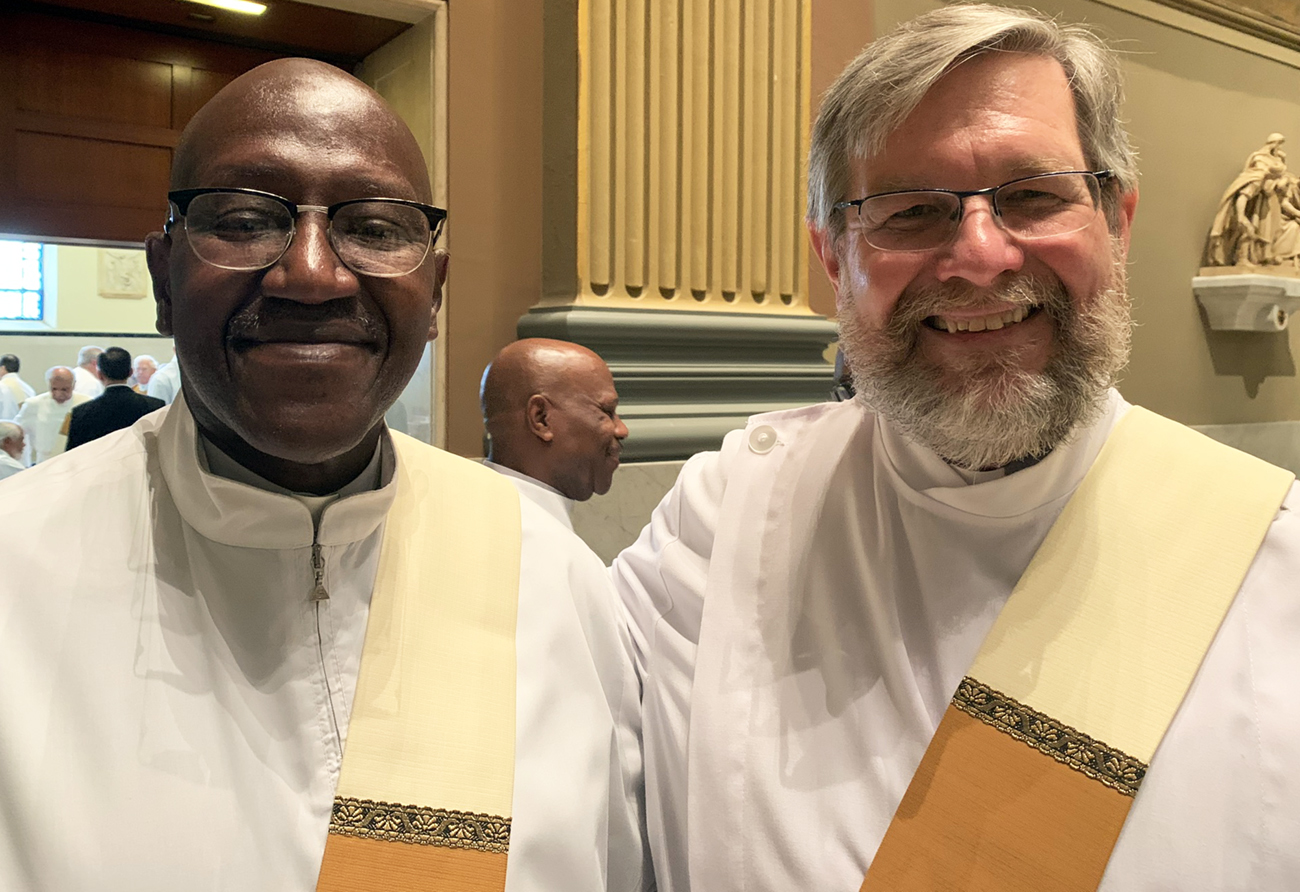 Now established in their ministries, permanent Deacons Anthony Willoughby (left) and Franz Fruehwald (right) said the permanent diaconate is a sign of both grace and witness. (Gina Christian)

He quoted Pope Francis, who in a 2016 homily stressed that critical to the role of deacon is a recognition that “his time is not his own, but a gift from God which is then offered back to him.”

The diaconate itself originated during the earliest days of the church in response to practical and pastoral challenges, as recounted in Acts 6:1-7. After four centuries, the ministry contracted into a temporary status before priesthood, but was restored during the Second Vatican Council.

Today there are some 19,000 permanent deacons throughout the United States, according to a newly released report from the Center for Applied Research in the Apostolate. With more than 260 deacons, Philadelphia is among the top 10 dioceses and archdioceses for the ministry.

While the average age of permanent deacons has increased (75% are aged 60 and over) and vocations have declined, the ministry remains one filled with “grace, spirituality and love,” said Deacon Fruehwald.

In their active service to the faithful, deacons give “witness to young men in parishes” and inspire them to consider vocations of their own, said Deacon Willoughby.

“Hopefully we will get more young people to hear the call,” he said. “They’re using cell phones, but there’s a bigger phone that’s ringing. They just don’t know it.”

Deacon Boyle said he’s looking forward to being “a bridge” between others and the Lord, especially after “a year that has been full of separation” due to COVID restrictions.

“As Archbishop Pérez has said, now is the time, and there is nothing like being there in person at Mass,” Boyle reflected. “I hope I can be that bridge, so that all of us understand the peace that is found in the Blessed Sacrament.”

NEXT: Diplomas in hand, kindergarteners are ready for summer break