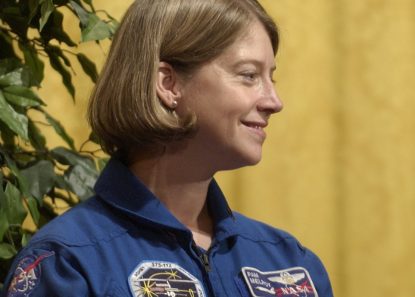 Astronaut Pamela Melroy, a graduate of Bishop Kearney High School in Irondequoit, N.Y., is seen in 2004. She has been named NASA’s deputy administrator. The U.S. Senate confirmed her for the position June 17, 2021, three months after she was nominated by President Joe Biden. (CNS photo/courtesy Catholic Courier)

ROCHESTER, N.Y. (CNS) — Pamela Melroy, an alumna of a Catholic high school in the Diocese of Rochester and one of the world’s most renowned astronauts, has a major distinction to add to her long list of accomplishments: deputy administrator for NASA.

The U.S. Senate confirmed her for the position June 17, three months after being nominated by President Joe Biden.

In a statement, she called it “an honor” to be confirmed for the post and said she is “humbled” by the confidence Biden and Vice President Kamala Harris have in her.

“I look forward to returning to the NASA family and working with Administrator (Bill) Nelson,” Melroy said, “to ensure the United States continues to lead in space and beyond — exploring the wonders of the universe, expanding the earth science research critical to combating climate change, unlocking scientific discoveries that will change the world as we know it, and inspiring the next generation of discoverers and dreamers.”

Melroy, a 1979 graduate of Bishop Kearney High School in Irondequoit, New York, served with NASA from 1995 until retiring in 2009.

During her tenure, she piloted two space shuttle missions, STS-92 in 2000 and STS-112 in 2002, and was the mission commander on STS-120 in 2007. All three were assembly missions for the International Space Station. (STS stands for Space Transportation System.)

Melroy is one of only two women to command NASA space shuttle missions, and both happen to be products of Catholic education in the Diocese of Rochester.

In 1999, Eileen Collins — an Elmira, New York, native who attended the former St. Patrick Elementary School — became the first female astronaut to command a shuttle mission when she led STS-93; she also commanded STS-114 in 2005. In addition, Collins was the first woman to pilot a shuttle mission when she served on STS-63 in 1995 and STS-84 in 1997.

Melroy, who will turn 60 Sept. 17, graduated from Bishop Kearney after having previously attended St. Louis School in Pittsford, New York. A 1975 article in the Catholic Courier (then the Courier-Journal) lists Melroy as one of that year’s incoming Bishop Kearney freshmen to have received a scholarship from the school. 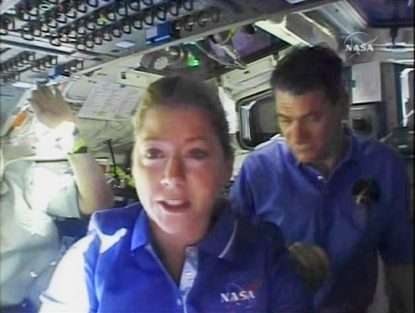 Commander Pamela Melroy and mission specialist Paolo Nespoli of Italy work on the aft flight deck of the Space Shuttle Discovery in this image from NASA TV Oct. 24, 2007. A graduate of Bishop Kearney High School in Irondequoit, N.Y., Melroy has been named NASA’s deputy administrator. The U.S. Senate confirmed her for the position June 17, 2021, three months after she was nominated by President Joe Biden. (CNS photo/NASA via Reuters)

She went on to receive a bachelor’s degree in physics and astronomy from Wellesley College in 1983 and a master of science degree in earth and planetary sciences from Massachusetts Institute of Technology in 1984. Prior to her NASA experience, she served as a longtime test pilot for the U.S. Air Force.

She is due to be inducted in the United States Astronaut Hall of Fame in November 2021; the induction had originally been scheduled for 2020 but was postponed due to the coronavirus pandemic.

Melroy, Michael E. Lopez-Alegria and Scott Kelly will join 99 current Hall of Fame members, including Collins, who was inducted in 2013.

NEXT: Pope accepts resignation of Auxiliary Bishop Sheltz of Galveston-Houston