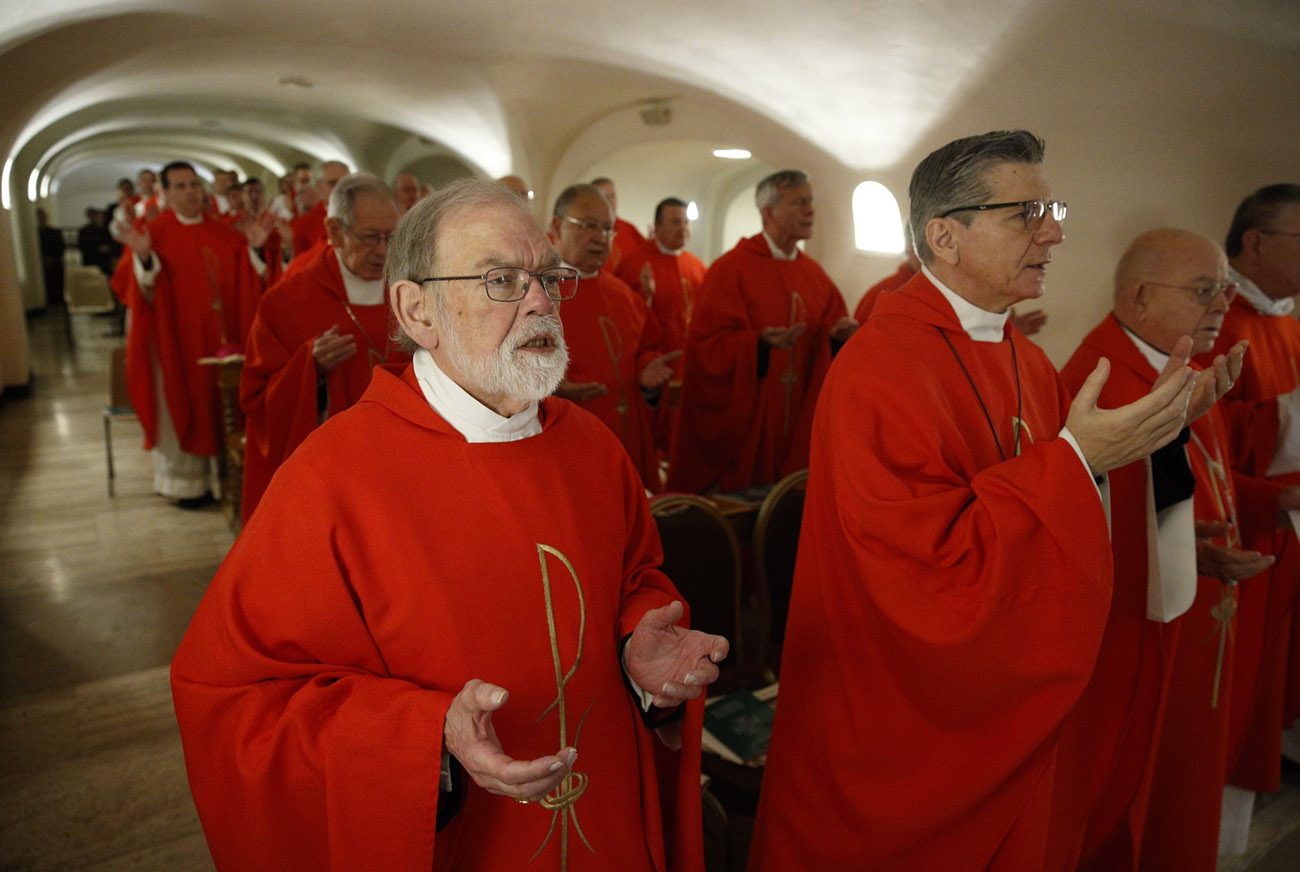 Auxiliary Bishop George A. Sheltz of Galveston-Houston and Archbishop Gustavo Garcia-Siller of San Antonio pray as bishops from Arkansas, Oklahoma and Texas concelebrate Mass in the crypt of St. Peter's Basilica during their "ad limina" visits to the Vatican Jan. 20, 2020. (CNS photo/Paul Haring) See ADLIMINA-TEN-STPETERS Jan. 20, 2020.

WASHINGTON (CNS) — Pope Francis has accepted the resignation of Auxiliary Bishop George A. Sheltz of Galveston-Houston, who is 75, the age at which canon law requires bishops to turn in their resignation to the pope.

Bishop Sheltz was named an auxiliary bishop for the  in 2012 by Pope Benedict XVI. Since 2010, he has served as vicar general, chancellor and moderator of the curia.

Born and raised in Houston, he was ordained to the priesthood in 1971 for what was the Diocese of Galveston-Houston. In 2004, St. John Paul II elevated the diocese to an archdiocese.

“I would like to take this opportunity to express my gratitude to Bishop Sheltz for his more than 50 years serving the archdiocese as a priest and bishop,” Cardinal Daniel N. DiNardo of Galveston-Houston said in a statement on the retirement of “our beloved auxiliary.”

“I am grateful for his friendship, counsel, and boundless commitment to the local faithful; his knowledge and love of his home diocese has always been evident in his words and actions,” the cardinal said. “In addition, his calm, insightful manner, and dry sense of humor was invaluable in overseeing the administrative operations of the archdiocese as chancellor.”

He said Bishop Sheltz will continue to temporarily serve as chancellor and moderator of the curia.

“Please join me in thanking Bishop Sheltz for his remarkable service to this local church,” Cardinal DiNardo added. “We will continue to pray for him as we wish him a healthy, restful and rewarding retirement.”

A priest for 50 years, Bishop Sheltz’s story in faith began in a family of men and women deeply committed to the church.

His maternal grandmother and Margaret Sheltz, his mother, both now deceased, and his sister Mary Margaret Keen also were profoundly devoted to the faith.

During his priesthood, Bishop Sheltz served at Assumption, Sacred Heart Co-Cathedral and St. Vincent de Paul churches. He was the founding pastor of Christ the Redeemer and served as pastor at both Prince of Peace and St. Anthony of Padua parishes, all within the archdiocese.

In an Oct. 10, 2019, statement, the archdiocese announced that the doctrinal congregation said the claim was “manifestly unfounded.”

“The Congregation for Bishops has notified us and this brings the matter to a close and Bishop Sheltz is restored to full public ministry,” the archdiocese said. “We are very grateful Bishop Sheltz is resuming his normal ministry activities effective immediately.”

Bishop Sheltz is only the seventh auxiliary bishop to be ordained in the oldest and largest diocese in Texas. He assisted Cardinal DiNardo in shepherding more than 1.2 million Catholics across 10 counties, 146 parishes and 59 schools.

A Jan. 19, 2021, tribute to the bishop on the website of his alma mater, Basilian-run St. Thomas High School, said the future bishop left the school “armed with a superb education, a vibrant and robust appetite for intellectual life, and a serious, undeterred faith.”

The tribute was occasioned by Bishop Sheltz’s induction into the school’s Hall of Honor for “having achieved a sublime level of devotion,” it said. “His dedication has brought inspiration to so many of those around him, a genuine model for the divine life. One that is joyful, intentional and fulfilled — a galvanizing presence for Houston’s Catholic community.”

PREVIOUS: Catholic school grad named to no. 2 post at NASA

NEXT: Nun calls protection of voting rights a moral issue at Georgetown forum