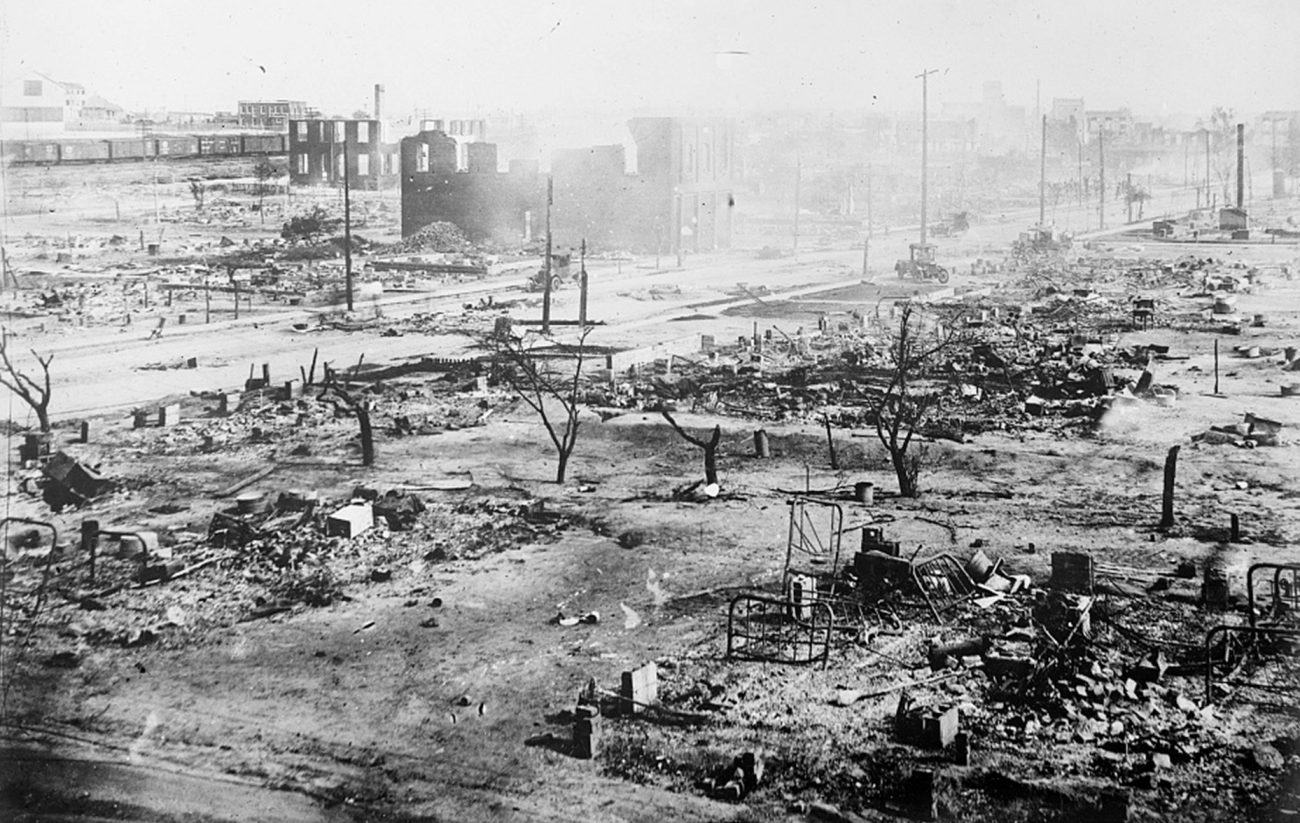 The Greenwood neighborhood is seen in ruins after a mob passed through it during the 1921 race massacre in Tulsa, Okla. (CNS photo/American National Red Cross, Library of Congress, Handout via Reuters)

TULSA, Okla. (CNS) — Ahead of a May 30 ecumenical prayer service to recall the Tulsa Race Massacre of 1921, Bishop David A. Konderla said it was important “to pause and reflect on how such an unspeakable horror could take place so that we can avoid any such evil in our own day.”

“It is hard to believe that 100 years ago people could think and act in such a way. It is unthinkable. Still, it happened,” he said.

The Tulsa bishop led the service at Holy Family Cathedral with the Rev. Robert Turner of the Historic Vernon Chapel A.M.E. Church, which remains a visual reminder of the massacre of Black people in an area of the city known as “Black Wall Street,” Tulsa’s prosperous Black neighborhood of Greenwood.

At the time, it was the wealthiest Black community in America. Rev. Turner’s church is the only standing Black-owned structure on Historic Greenwood Avenue from that era.

Bishop Konderla said the prayer service was “a time to acknowledge a grave evil that took place and mourn the lives lost and destroyed as well as a time to celebrate the courage of those people who served as shining lights in that dark time to help the victims.”

The Tulsa Race Massacre, one of the most severe incidents of racial violence in U.S. history, began May 31, 1921, and lasted for two days. It left somewhere between 30 and 300 people dead, mostly African Americans, and destroyed over 1,400 homes and businesses.

Despite its severity and destructiveness, the Tulsa race massacre was barely mentioned in history books until the late 1990s, when a state commission was formed to document the incident.

“According to R. Halliburton, Jr., author of ‘The Tulsa Race War of 1921,’ the director of a squad of black grave diggers reported that 150 died,” according to an article reprinted in the June 2021 issue of the Eastern Oklahoma Catholic, Tulsa’s diocesan magazine. “But The Oklahoma Eagle, the city’s Black newspaper, claims that as many as 300 persons were killed.” 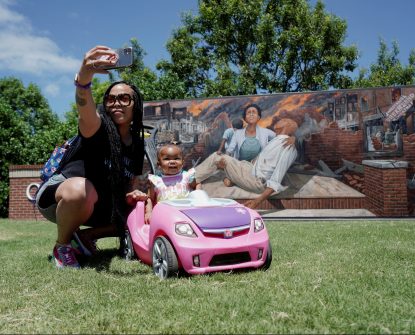 A mother and child in Tulsa, Okla., take a photo May 29, 2021, in front of a mural that recalls the Tulsa Race Massacre of 1921. (CNS photo/Lawrence Bryant, Reuters)

“Tulsa’s Black community suffered a catastrophic human loss, and many refused to accept the official death list,” Halliburton wrote. “The total casualties will never be known. Hospital and Red Cross records indicate that nearly a thousand were treated.”

The racial violence broke out in the city after an accusation was made that a 19-year-old Black man, Dick Rowland, had sexually assaulted a white woman who was the elevator operator at in the Drexel office building downtown.

“Rowland supposedly stumbled and stepped on the foot of the white operator, a young divorcee named Sarah Page. Page became excited and screamed when the Black man bumped against her, and he fled from the elevator,” according to the article in the Eastern Oklahoma Catholic.

“This seemingly insignificant incident happened on the morning of May 30, 1921. The next day, Rowland was arrested and at 3:15 p.m., The Tulsa Tribune released a front page article headlined ‘Nab Negro for Attacking Girl in an Elevator.'”

White rioters invaded Greenwood just north of downtown and “began stealing, destroying and murdering men, women and children,” the article said. “When the rioters had finished, almost 10,000 of the area’s 11,000 residents were homeless. Two days later, the knights of the Klu Klux Klan met on a hillside to celebrate the carnage by burning a large cross, a trademark of the Klan.”

In the midst of the riot, Father James Heiring, the pastor of Holy Family Cathedral in Tulsa, opened the doors of the church to provide refuge and protection for those fleeing the violence.

According to an article published by The Tulsa Tribune June 6, 1921, the cathedral’s nuns, the women of the Society of St. Vincent de Paul Society and its Knights of Columbus provided food, clothing and shelter to some 400 Black victims of the riot.

“Aiding black victims of the riot was not free of risk for the cathedral and its parishioners,” wrote James O. Goodwin in Tulsa’s diocesan magazine. “The message sought to be conveyed by the rioters was that Tulsa’s white society had no room for the Black man, and the rioters’ attitudes toward Catholics were little better.

“But the courage displayed by the people of Holy Family was a reply to the rioters’ message. The cathedral’s people were saying that all men and women are children of God and entitled to receive the protection and help that all God’s children deserve.”

Father Gary Kastl, current pastor of Holy Family Cathedral, said: “The witness of our parishioners from the time of the race massacre should not just make us proud of what the cathedral did at that tenuous time, but rather inspire all of us to be individuals who work to bring peace and mutual respect back into our communities today.”

“Every human being possesses an inherent dignity that can never be taken away,” he added. “This is the fundamental principle within the Catholic tradition that drives the mandatory respect not only for life but also for the diversity that exists within the human family due to culture, race and ethnicity.”

“When we come together seeking that which unites us, our faith and salvation in Christ,” Father Kastl said, “the diverse places from which we come help inform our understanding and appreciation that different cultures bring to a community.”

Editor’s Note: Articles on the Tulsa Race Massacre of 1921 in the June issue of the Eastern Oklahoma Catholic magazine can be found online here. 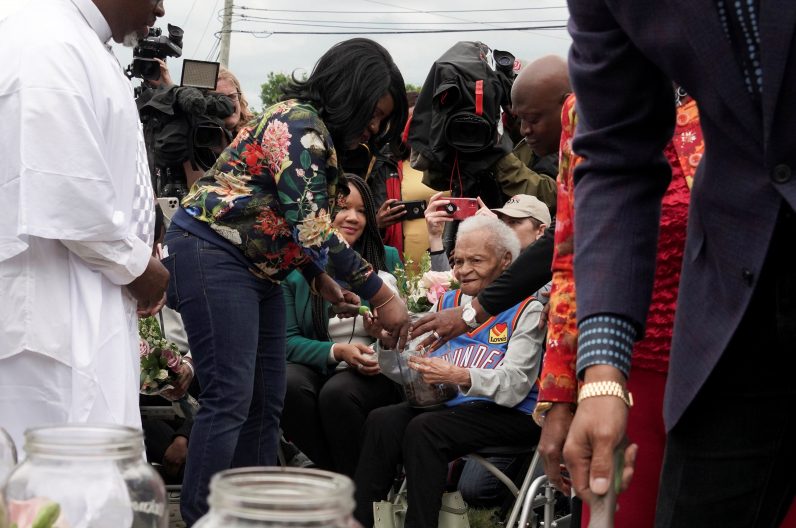 Viola Fletcher, a survivor of the 1921 race massacre in Tulsa, Okla., attends a soil dedication ceremony May 31, 2021, at Stone Hill in Tulsa’s Greenwood neighborhood to mark the 100th anniversary of the mass murder of Blacks. (CNS photo/Lawrence Bryant, Reuters)

PREVIOUS: Water proves powerful in its presence — and by its absence

NEXT: Ending limit on culturing human embryos called ‘affront’ to value of life