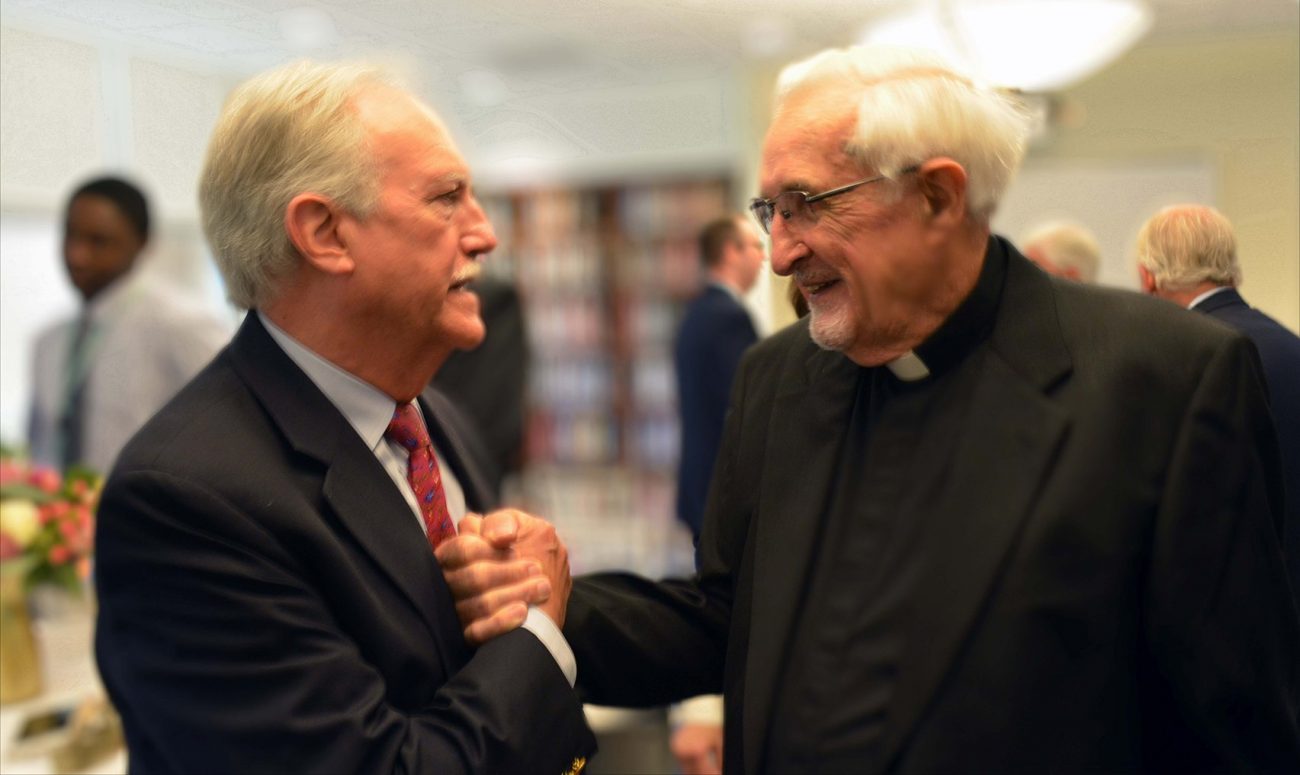 Miguel "Mike" Bezos talks with Oblate Father James P. Byrne in an undated photo. Bezos has pledged $12 million to Salesianum School in Wilmington, Del., to establish a scholarship in memory of Father Byrne, who supervised the house for immigrant Cuban boys who attended Salesianum in the early 1960s. Bezos graduated from the school in 1963. Father Byrne died in March 2020. (CNS photo/courtesy Salesianum School via The Dialog)

WASHINGTON (CNS) — Miguel Bezos, the immigrant father of Amazon.com founder Jeff Bezos, has donated $12 million to a Catholic school in Delaware that housed and educated him when he arrived as an unaccompanied minor from Cuba in the early 1960s.

The senior Bezos attended Salesianum School in Wilmington, Delaware, after fleeing post-Revolution Cuba, along with over 14,000 other minors brought to the U.S. through Operation Pedro Pan, a program organized by the Catholic Church with the help of the U.S. government.

Back then, Father James P. Byrne, of the Oblates of St. Francis de Sales, was put in charge of Casa de Sales, where Bezos was welcomed with other Cuban boys.

“There was a priest in charge of us, and it was a tremendous experience for me. I’m sure you’ve heard sad stories about what terrible experiences some of the Peter Pan kids had, but for us in Wilmington, we had each other, and we became very close,” Bezos said in a 2016 interview posted on the website of the Smithsonian’s National Museum of American History.

“To this day, a lot of us still talk to each other and visit once in a while,” he said. “We also visit with the priest that was in charge of us. In the middle of all the chaos, it was a wonderful experience.”

The donation, announced June 16, honors the priest, who died last year, and will be used for an endowment to fund the Rev. James P. Byrne, OSFS Scholarship.

Preference will be given to qualified applicants living in Wilmington who are children of immigrants to the United States in recognition of “the school’s legacy of educating generations of immigrants,” said a news release from the school.

The gift from Bezos and his wife, Jacklyn Bezos, will fund 24 scholarships and also help with incidental expenses such as books, retreats, service trips and college entrance exam fees.

“Mike and Jackie understand the complex obstacles faced by underserved students and wanted to give these students the best path to success,” said the Catholic school’s president, Brendan Kennealey, according to the news release.

In the 2016 Smithsonian interview, Miguel Bezos describes his experience of leaving his native Cuba and settling in his new country.

Back then, “there wasn’t a lot of real anti-refugee, anti-immigration feelings at the time, but obviously you always encounter some negative feelings,” he said.

After attending Salesianum, he attended the University of Albuquerque, New Mexico, and then worked for over 32 years at Exxon Mobil.

“I’d like immigrants to know that things are going to be different and that you have to adapt to new things, but you don’t have to lose your identity. Things are not going to be like back home,” he said in the Smithsonian interview.

“On the other side, for those that are receiving new neighbors,” he added, “the best thing that you can do is to help them assimilate. There is always that need to compromise on both sides.”

NEXT: Q&A tackles questions about vote on Communion document