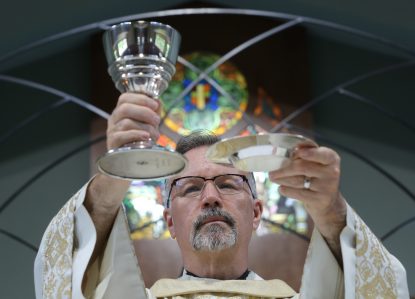 A priest raises the chalice and Communion host in this illustration. (CNS photo/Bob Roller)

WASHINGTON (CNS) — A page on the website of the U.S. Conference of Catholic Bishops answers a series of questions regarding the bishops’ vote to approve drafting a document on the Eucharist during their spring general assembly June 16-18.

Presented in a question-and-answer format, the page reviews four questions including why the document is being developed and whether the bishops voted to ban elected officials from receiving holy Communion.

The webpage — www.usccb.org/meaning-eucharist-life-church — is dated June 21, three days after the bishops announced the vote to allow the Committee on Doctrine to draft the document and present it for discussion when the bishops reconvene in person in November.

The U.S. bishops approved advancing a plan to draft a document to examine the “meaning of the Eucharist in the life of the church” following a lengthy debate during their assembly, held virtually due to the pandemic. The action passed with 168 votes in favor and 55 votes against it. There were six abstentions.

Chieko Noguchi, USCCB director of public affairs, told CNS in an email June 24 that the question-and-answer online document was developed by her office in collaboration with Bishop Kevin C. Rhoades of Fort Wayne-South Bend, Indiana, doctrine committee chairman, and Bishop Michael F. Burbidge of Arlington, Virginia, chairman of the Committee on Communications.

“We were hearing from people who seemed to misunderstand the vote, so it was created and then shared with all bishops with the approval of the conference president,” Archbishop José H. Gomez of Los Angeles, she wrote.

In two paragraphs leading to the questions, the webpage states that the vote approves the drafting of a teaching document on the Eucharist, explaining: “The question of whether or not to deny any individual or groups holy Communion was not the ballot.”

Noting the Eucharist is the source and summit of Christian life, it says that “the importance of an ever deeper understanding of the beauty and mystery in our lives” is not a new topic for the bishops to address.

“The document being drafted is not meant to be disciplinary in nature, nor is it targeted at any one individual or class of persons. It will include a section on the church’s teaching on the responsibility of every Catholic, including bishops, to live in accordance with the truth, goodness and beauty of the Eucharist we celebrate,” it says.

The first question addresses why the bishops acted on this during their meeting.

The webpage also says the Communion document “will serve as a foundation for the conference’s Eucharistic Revival Project, a national effort focused on reviving eucharistic faith.

“No, this was not up for vote or debate. The bishops made no decision about barring anyone from receiving holy Communion,” the response says.

It stresses that all Catholics are called to “continual conversion,” while the bishops have “repeatedly emphasized the obligation of all Catholics to support human life and dignity and other fundamental principles of Catholic moral and social teaching.”

The third question focuses on whether the bishops plan to issue a national policy on withholding Communion from politicians.

“There will be no national policy on withholding Communion from politicians,” the online document says in response. “The intent is to present a clear understanding of the Church’s teachings to bring heightened awareness among the faithful of how the Eucharist can transform our lives and bring us closer to our creator and the life he wants for us.”

The final question asks if the Vatican told the bishops not to move forward on drafting a teaching document on the Eucharist.

The webpage says this was not the case but that the Vatican has encouraged the bishops to “engage in dialogue and broad consultation” and that the discussion during the recent spring general assembly was part of that process.

“It is important to note that collaboration and consultation among the bishops will be key in the drafting of the document,” the webpage says.

A consensus emerged among the bishops’ during the debate on drafting the document to convene regional discussions, the outcomes of which would be forwarded the doctrine committee.

NEXT: Catholic agency offers help after ‘heartbreaking’ collapse of building