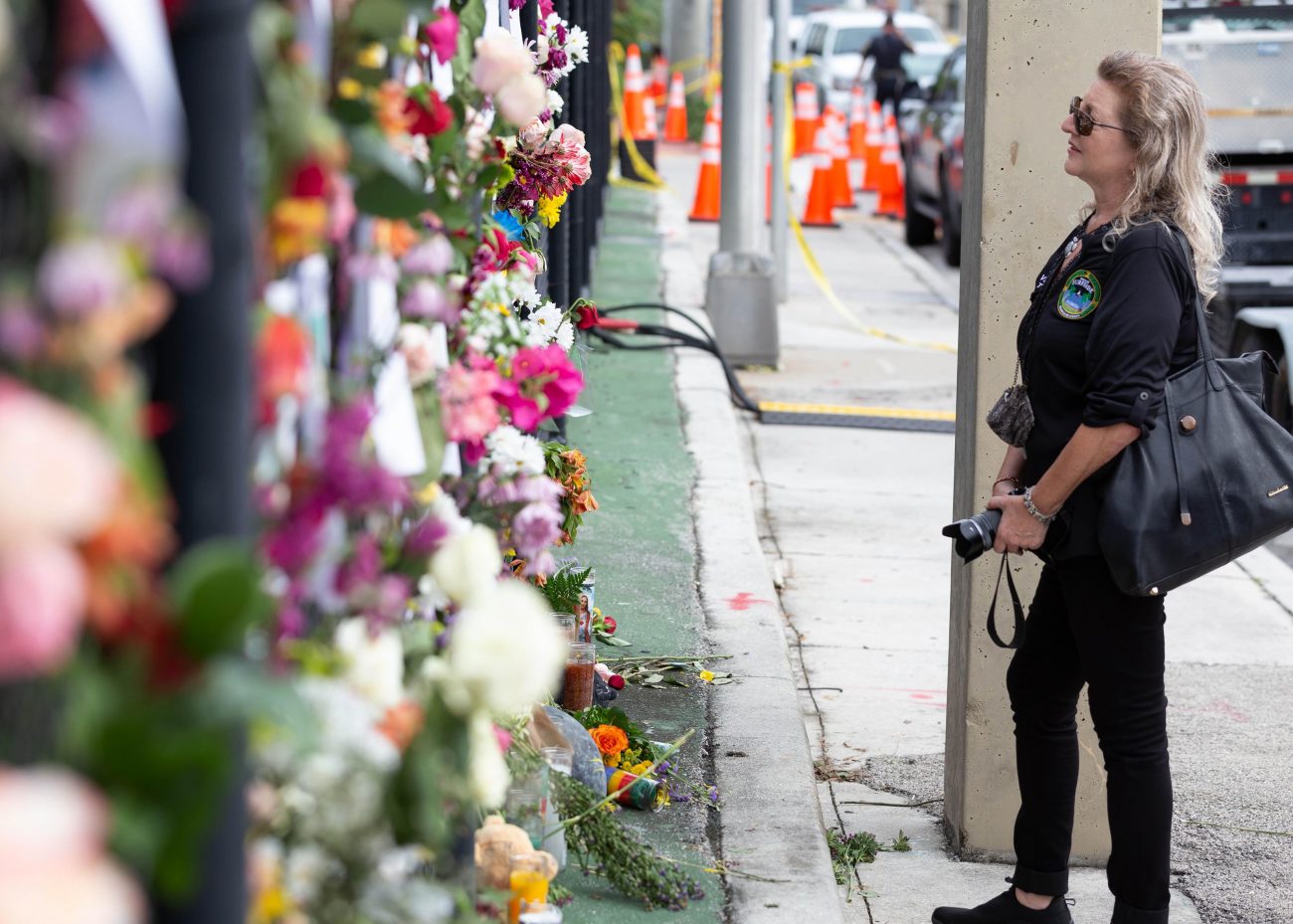 Tina Paul, vice mayor of Sunrise, Fla., visits a makeshift memorial June 26, 2021, for those who have died and who are still missing near the site of the partially collapsed condo building. (CNS photo/Tom Tracy, Florida Catholic)

Surfside’s informal Wall of Remembrance memorial sprung up following the tragic partial collapse of the Champlain Towers South condo building near Miami Beach. It has been so popular since it appeared late last week that the local law enforcement had to close the area due to hundreds gathering on the streets there.

“God is ‘El Roi,’ the God Who Sees — Help the First Responders find their bodies,” reads on note, using a reference to one of God’s names found in the Book of Genesis.

Another note, posted beneath a photo of a Hispanic father and son, reads: “Be with their family, Lord. Let them know they are not alone, Jesus. We are praying.”

The area was devoid of visitors the afternoon of June 26, and Tina Paul, vice mayor of the town of Sunrise, Florida, came to take pictures of the wall and pay respects to several of the missing persons she said she knows personally.

“It is my second visit; last night we visited the (ground zero) site with our building officials and structural engineers, and on our way home we saw the site — it was just being set up and I wanted to come back and see it again,” Paul said. “I really look at everybody.” 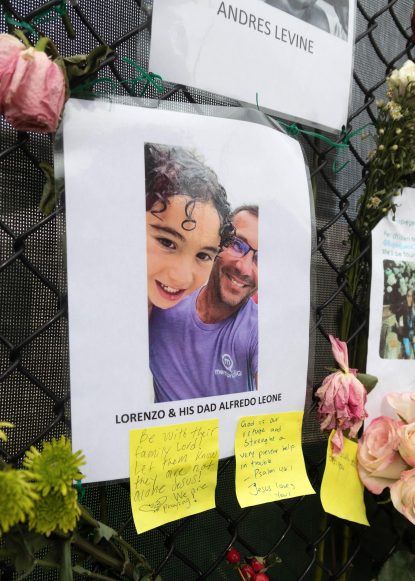 A makeshift memorial for those who have died and who are still missing in Surfside, Fla., is seen June 26, 2021, near the site of the partially collapsed condo. (CNS photo/Tom Tracy, Florida Catholic)

“It has grown a lot since last night, and I just feel so bad,” she told the Florida Catholic, newspaper of the Miami Archdiocese. “My friend is right up there,” she said, pointing to a picture of a missing couple Miriam and Arnie Notkin.

Some of the missing Catholic families and parishioners of St. Joseph Church, a short walk away, are represented as well, including Juan Mora Jr., seen wearing a tuxedo, possibly at a friend’s wedding celebration. His parents, Juan and Ana Mora, also are officially missing. The family belongs to St. Joseph Parish.

After spending time at the Surfside family reunification center, a kind of gathering place for briefings from civic authorities and the coordination of volunteer activities, a visiting clergyman and a National Guard-trained crisis responder in terrorism and disaster response from Tampa, Florida, tried, but failed, to come see the remembrance wall firsthand.

Pastor Moses Brown, a senior chaplain and evangelical minister at Advent Health in Land O’ Lakes, Florida, and a native of Broward County said he met with some of the family members waiting for the daily updates.

“There are not many words to say in something this catastrophic but ‘God be with you,'” Brown said.

“I went down to the Haiti earthquake, and that was something to see — the reliance of those people. Some things you can’t be trained on but being there trains me. Haiti showed me that it could happen,” he said. 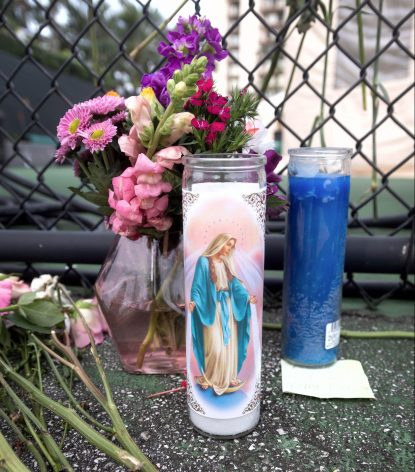 “Sometimes these things are unbelievable until you see it yourself. All of us living in high rises are thinking, ‘Could it be me?'” Brown said.

He said he was encouraged that St. Joseph Church is part of the Surfside community; he said he was directed there by a police officer in Surfside who said it was a place to come pray.

“That means it’s relevant in this community — I found the church by talking to a police officer who is sending people over there, so I said to myself, that must be a church that is really doing something.”

The pastor of St. Joseph Parish, Father Juan Sosa, and a group of parish clergy and parishioners concluded an evening prayer vigil and eucharistic adoration June 26 by walking several blocks over to the wall of remembrance.

But they were, like others had been, informed the area was not open due to public safety concerns. Still, they were close enough to see the ground zero site and so illuminated their cellphone lights, sang a few hymns and prayed for a few minutes before leaving. 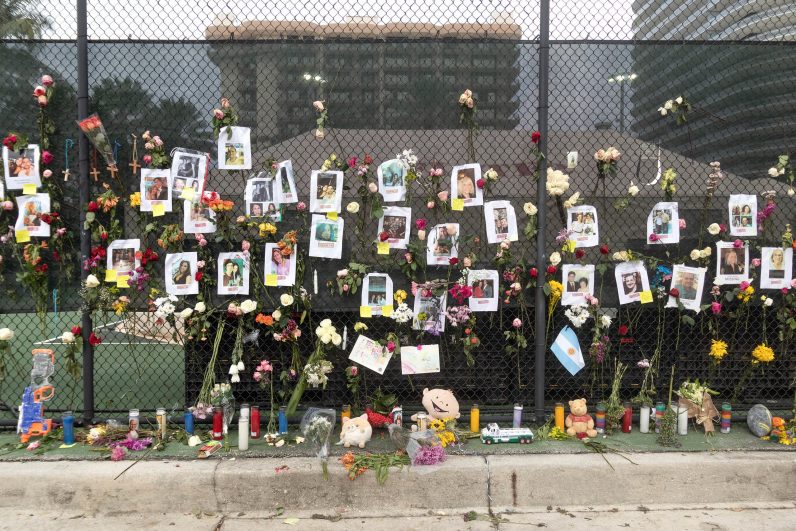 NEXT: Advocates call for ‘religious freedom for everyone, everywhere’