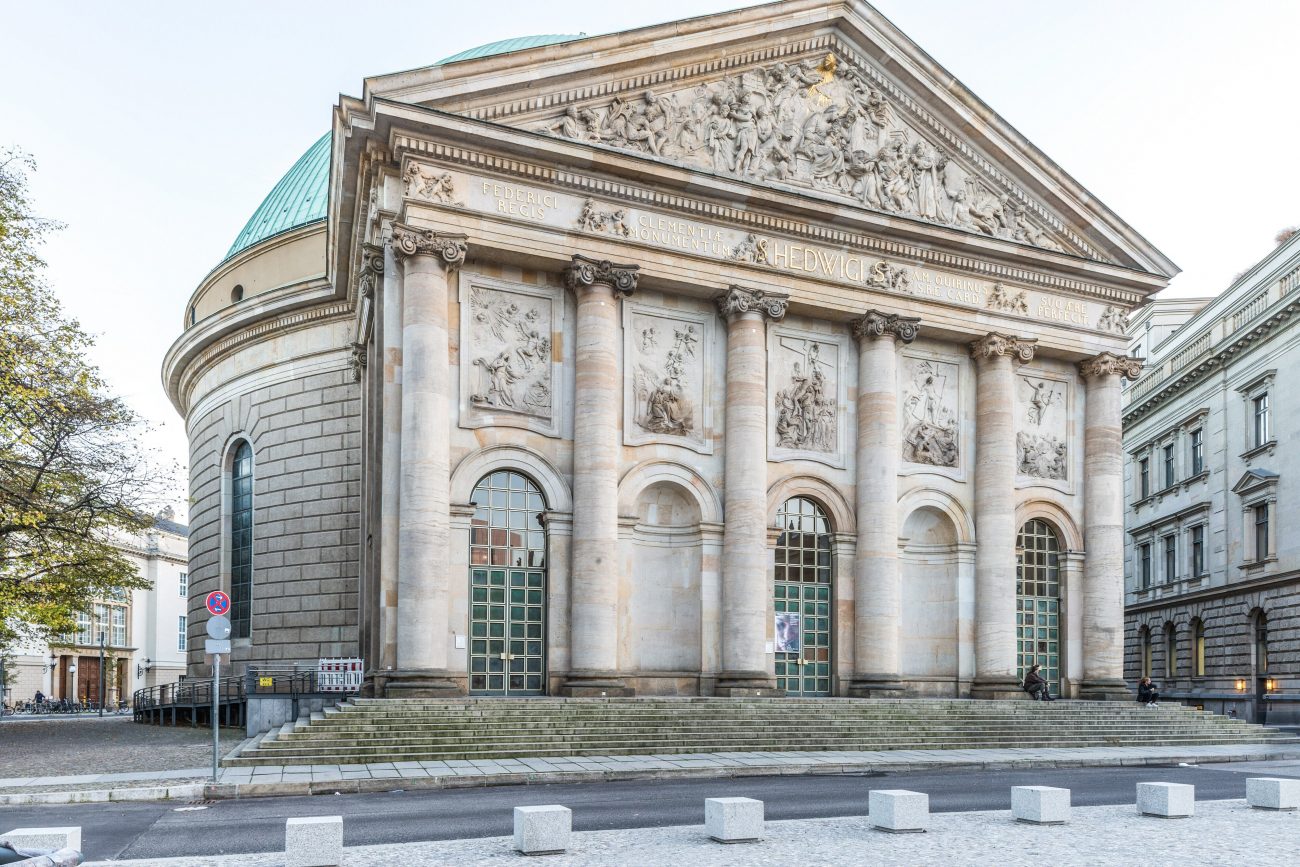 The facade of St. Hedwig's Cathedral is pictured in Berlin Nov. 3, 2017. The Archdiocese of Berlin says the expert commission on sexual abuse in the archdiocese has suspended its work for the time being. (CNS photo/Kristian Barthen, KNA)

BERLIN (CNS) — The Archdiocese of Berlin announced that it was temporarily suspending the work of its expert commission established to follow up on a legal report about sexual abuse in the archdiocese since 1946.

The archdiocese said June 22 that the commission is recommending that findings from the legal firm Redeker Sellner Dahs be reworked or that another legal firm be commissioned to investigate the abuse.

In a statement later that day, lawyers Sabine Wildfeuer and Peter-Andreas Brand of Redeker Sellner Dahs said they learned about the suspension of the archdiocesan Sexual Abuse Expert Commission through the media.

“No one has spoken to us about this, neither from the archdiocesan staff nor from the expert commission,” the letter said.

“Our mandate for a legal opinion has been fulfilled completely and properly. The report states in detail by whom and in what way cases of sexual abuse were covered up in the area of the archdiocese and whether and to what extent the applicable church and ecclesiastical criminal law regulations were observed.”

In January, when the lawyers’ report was first presented, about two-thirds of it was not made available to the media or the public, on the orders of Archbishop Heiner Koch of Berlin.

On June 18, the German Catholic news agency KNA reported that the Berlin Archdiocese posted on the internet the previously undisclosed part of the law firm’s report on abuse by clergy. In it, the authors describe 61 cases and present their views about mistakes made as to how accusations were handled. Archbishops Koch and Cardinal Rainer Maria Woelki of Cologne, who preceded him in Berlin, were named.

KNA said the parts of the report made public June 18 cited seven violations of guidelines laid down by the German bishops’ conference. For example, some information had not been accurately passed onward, and some accused were not confronted with allegations against them.

Wildfeuer and Brand said June 22: “The real coming to terms with the abuse scandal, including the necessary structural and personnel consequences, is beyond a purely legalistic consideration, but must go deeper and in particular tackle the structural changes we have proposed. We therefore extremely regret that the expert commission wants to suspend its proceedings for the time being and call on it to continue its work without delay.”

All 27 German Catholic dioceses have commissioned legal opinions on sexual abuse in their dioceses. Not all of the legal opinions have been published.

In Cologne, Cardinal Woelki did not accept the first legal opinion and ordered a second one. A special Vatican commission recently completed an inquiry into the Cologne Archdiocese but has not made public its findings.