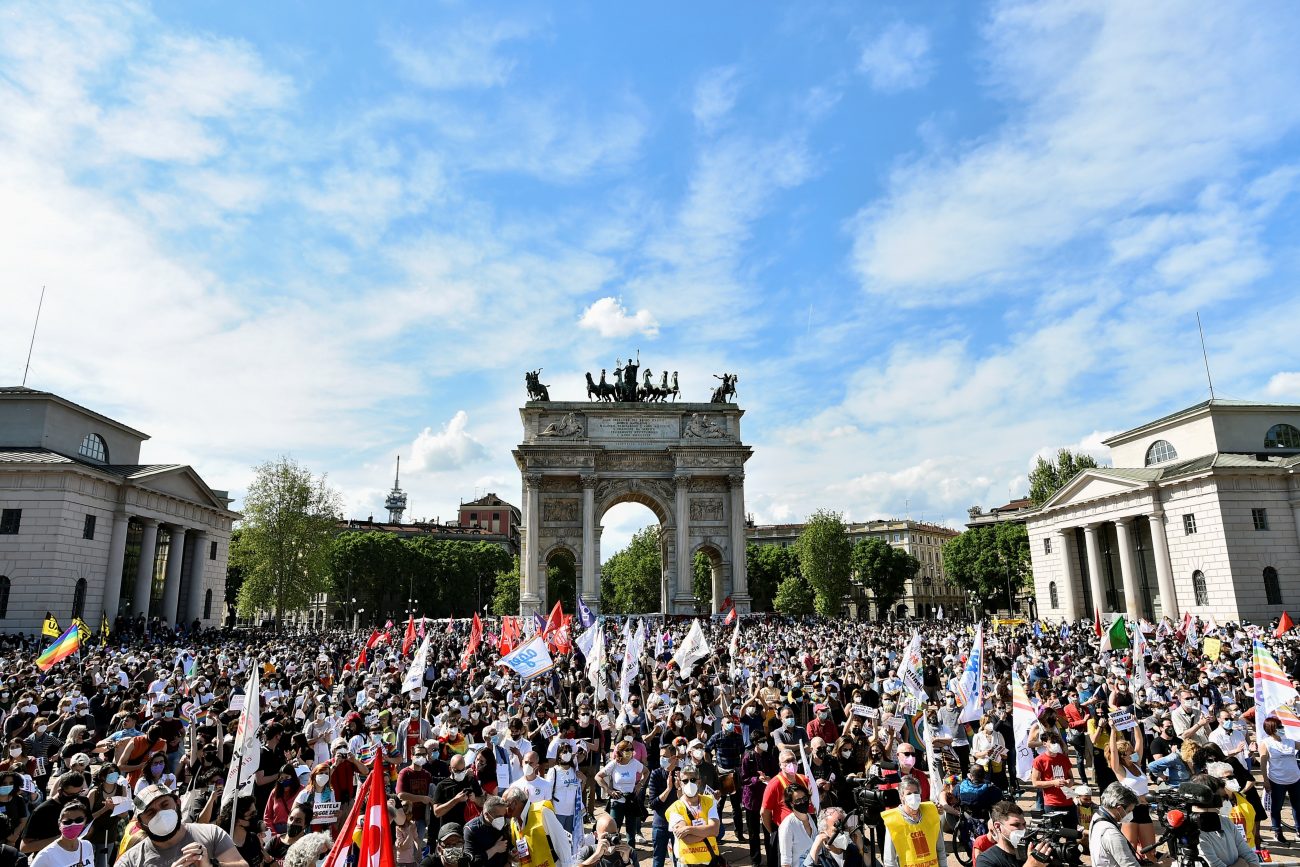 People gather in Milan May 8, 2021, to support of a proposed anti-discrimination bill that makes violence against LGBT+ people a hate crime. The Vatican has informed Italy that a draft law to fight homophobia and discrimination and violence based on sexual orientation and gender identity could violate the freedom of Catholics to teach and practice their faith. (CNS photo/Flavio Lo Scalzo, Reuters)

VATICAN CITY (CNS) — The Vatican has informed Italy that a draft law to fight homophobia and discrimination and violence based on sexual orientation and gender identity could violate the freedom of Catholics to teach and practice their faith.

The Vatican press office confirmed June 22 that a “nota verbale,” a form of diplomatic correspondence, “from the Secretariat of State was informally delivered to the ambassador of Italy to the Holy See June 17, 2021.”

The press office did not go into the contents of the letter, which were first reported by the daily newspaper Corriere della Sera.

At issue is the “Zan Law,” named after the bill’s sponsor, Alessandro Zan, and approved by the lower house of Italy’s parliament in November.

Now under consideration by the Senate, the law would add to the definition of hate crimes acts motivated by the victim’s “sex, gender, sexual orientation, gender identity or disability.”

The Vatican note, Corriere said, asserted that aspects of the proposed law could violate the formal treaty between Italy and the Holy See, originally signed in 1929 and updated in 1984, which guarantees to the church “freedom of organization, public exercise of worship, exercise of the magisterium and the episcopal ministry” and the freedom of Catholics to gather and to share their opinions and beliefs “by word, writing and any other means of dissemination.”

The note, the newspaper said, expressed concern that under the law as currently drafted the church and individual Catholics could risk being taken to court for upholding church teaching on the creation of human beings as man and woman, on sexuality, marriage and parenthood.

Corriere also said the Vatican is concerned that no exemption is allowed for Catholic schools in the draft bill’s mandate that schools participate in the May 17 celebration of a national day against homophobia, with educational activities aimed at “promoting a culture of respect and inclusion and fighting prejudices” against gay and transgender persons.

The leadership of the Italian bishops’ conference published a statement April 26 saying it supported every effort to recognize the full dignity of every human person;  “however, a law that intends to combat discrimination cannot and must not pursue the goal with intolerance, questioning the reality of the difference between men and women.”

NEXT: Archdiocese of Berlin suspends work of commission on sexual abuse