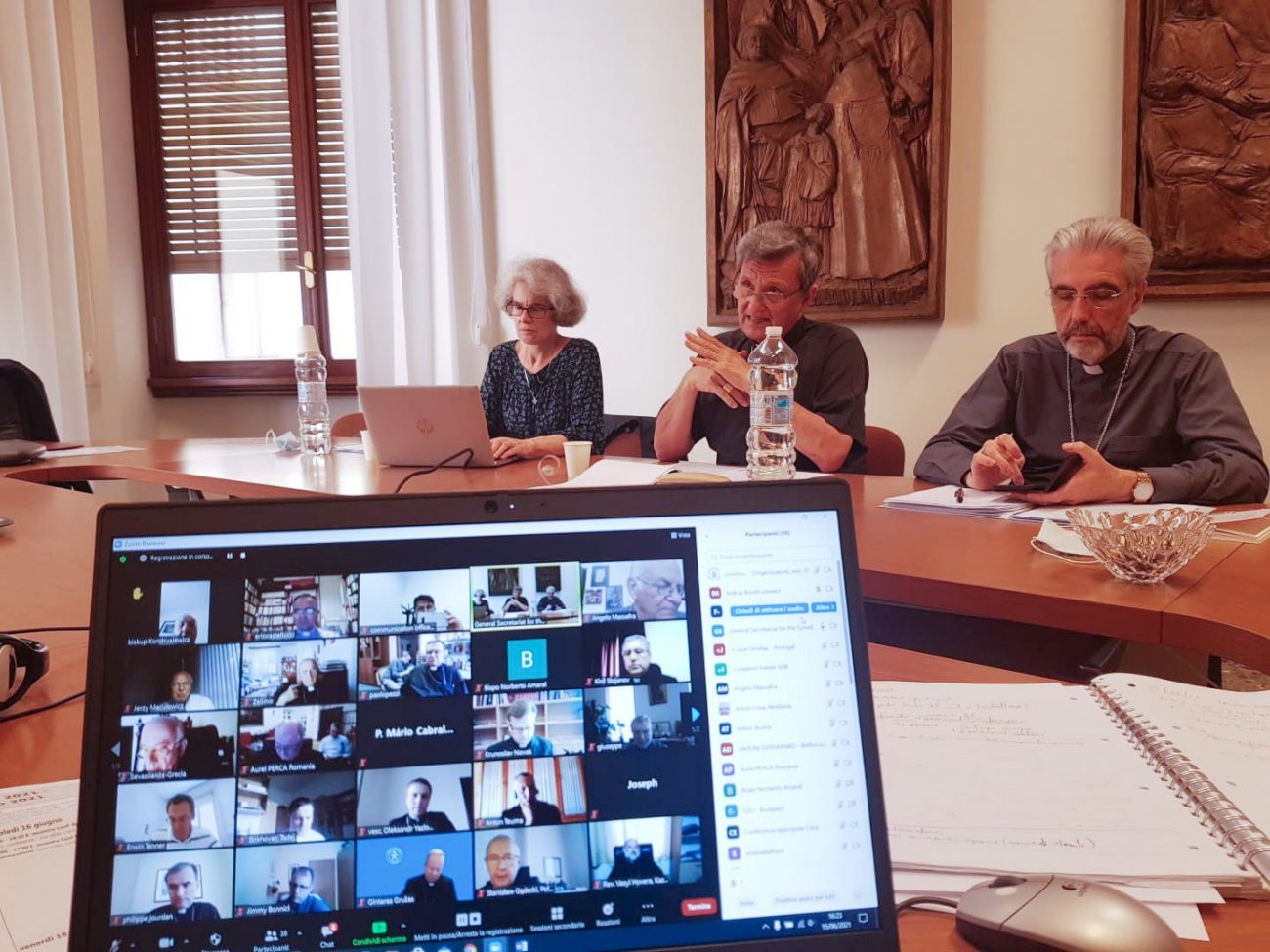 Leaders of the secretariat of the Synod of Bishops are pictured at the Vatican during an online meeting with presidents and general secretaries of national and regional bishops' conferences June 15, 2021. The meeting was held to explain the expanded consultation process in preparation for the world Synod of Bishops in 2023. From left are: Xaviere Missionary Sister Nathalie Becquart, synod undersecretary; Cardinal Mario Grech, synod secretary; and Bishop Luis Marín de San Martín, synod undersecretary. (CNS photo/courtesy Synod of Bishops)

VATICAN CITY (CNS) — After issuing revised guidelines for preparing for the next world Synod of Bishops, leaders of the synod’s general secretariat held online meetings with the presidents and general secretaries of national and regional bishops’ conferences.

In revisions to the synod process announced May 21, Pope Francis has asked that it begin with consultations with laypeople on the diocesan level before the discussion and discernment moved to a national level and then the 2023 synod assembly itself.

“Without this consultation, there would be no synodal process, because the discernment of pastors, which constitutes the second phase, emerges from listening to the people of God,” Cardinal Grech had explained in May.

After the first couple of meetings with leaders of bishops’ conferences, the cardinal said the reaction was “surprising, very positive, and there is a lot of enthusiasm among the bishops we have heard.”

In an interview June 15 with Vatican News, he said some of the bishops, like those in Australia who are preparing a plenary council, already have had experience with consultation and listening at the grassroots level.

“We are sharing experiences,” he said. “With the preparatory document that will be published in September, we also want to publish a guidebook on synodality best practices because some have already begun, but others are only at the beginning.”

But, Cardinal Grech told Vatican News, not much is set in stone. “We have some general ideas, but we are open. This is not a fixed process, but we are listening to our partners because the synod is not a project of the secretariat but of the church.”

The expanded consultation, listening and discernment, he said, is the desire of Pope Francis, but based on the teaching of the Second Vatican Council that the church is the people of God.

NEXT: Mexican priest killed in crossfire in north-central Mexico