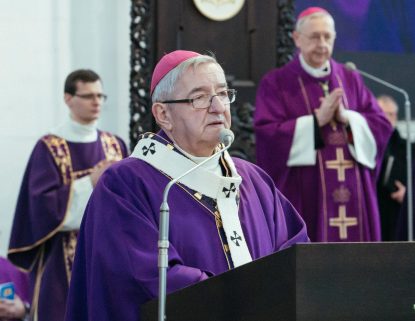 Polish Archbishop Slawoj Glodz is pictured in a Jan. 19, 2019, photo in Gdansk. The archbishop, who headed the Gdansk Archdiocese until August 2020, was elected mayor of his hometown after being sanctioned by the Vatican for ignoring sexual abuse. (CNS photo/Agencja Gazeta, Renata Dabrowska via Reuters)

A disgraced Polish archbishop has been elected mayor of his hometown after being sanctioned by the Vatican for ignoring sexual abuse by his clergy, as two more bishops were disciplined for similar offenses.

In a statement, the Jaswila district council said Archbishop Slawoj Glodz, who headed the Gdansk Archdiocese until last August, had been elected administrator, of Piaski, adding that local officials had extended “heartfelt congratulations.”

However, Poland’s Catholic Wiez quarterly, which has campaigned against sexual abuse in the church, warned the “unprecedented move” would provoke “irritation and scandal in society.”

“Unfortunately, this isn’t the opening of a new TV comedy season, but part of our Polish ecclesial life,” Wiez commented June 24.

“As a doctor of canon law, Archbishop Glodz may well defend his decision from the letter of the law — but the letter isn’t everything. An additional issue is the disgust associated with yet another exposure of a person who, with Vatican-imposed penalties, should by normal logic be remaining silent.”

On March 29, the Vatican ordered Archbishop Glodz, now 75, to live outside his former archdiocese and avoid “public religious celebrations or lay meetings,” after investigations into his handling of clerical abuse and “other issues” related to his time in office.

The archbishop, who was also ordered to pay an “appropriate amount from personal funds” to a Polish church fund for preventive activities and victim assistance, was among the latest of several senior prelates sanctioned under the pope’s May 2019 motu proprio, “Vos estis lux mundi,” after being publicly accused of violating Polish law and Vatican guidelines by brushing aside abuse complaints.

In a June 25 statement, Archbishop Wojciech Polak, the Polish church’s child protection delegate, said retired Bishop Stefan Regmunt of Zielona Gora-Gorzow had been barred from public appearances and participating in the bishops’ conference and ordered to pay personal funds to an anti-abuse foundation.

Jaswila’s deputy mayor, Marek Jaros, told Poland’s Money.pl financial news site June 24 that there had been “no obstacle” to Archbishop Glodz’s election under Polish administrative law, adding that the move had been supported by the region’s inhabitants.

However, he added he had been personally “shocked” that “such a senior church hierarch could become an unpaid local official,” and said the archbishop, who owns a 52-acre estate in his hometown, was expected to outline his plans at a June 29 council meeting.

The Vatican nunciature declined to answer Catholic News Service’s telephone questions about the archbishop’s election June 25, while the Polish bishops’ conference press office told CNS June 24 that the conference had “no jurisdiction” over a retired archbishop.

The church’s Canon 285 forbids clerics “to assume public office whenever it means sharing in the exercise of civil power,” and “everything that is unbecoming to their state.”

In a June 25 analysis for the KAI agency, a church law professor, Piotr Majer, said the election of a priest as town mayor did not “contradict the letter of canonical provision,” since the post was “not related to the exercise of power.”

However, he added that such positions were clearly “foreign to the clerical state” and should be held by laypeople.