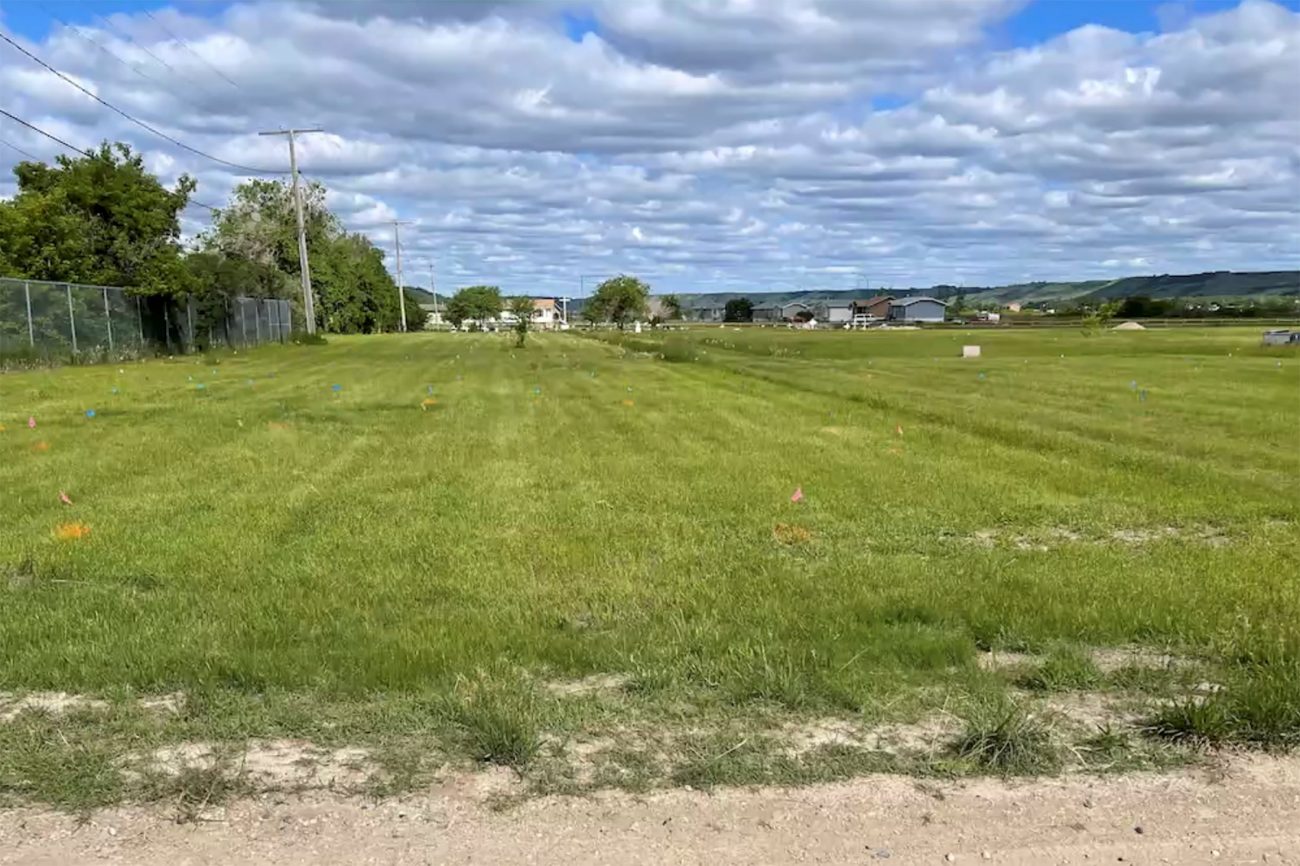 A field near the former Marieval Indian Residential School where the Cowessess First Nation say they found the unmarked graves of hundreds of people is seen near Grayson, Saskatchewan, in a still image from video June 24, 2021. (CNS photo/Federation of Sovereign Indigenous Nations, Handout via Reuters) EDITORS: NO ARCHIVES. MUST DISCARD 30 DAYS AFTER DOWNLOAD.

TORONTO (CNS) — The Cowessess First Nation will put a name to each of the hundreds of bodies found at the unmarked graves on the former Marieval Indian Residential School, vows Chief Cadmus Delorme.

“We will put a headstone and a grave to each of them,” Delorme said at a June 24 news conference to announce the discovery of hundreds of bodies on the southeast Saskatchewan First Nations’ lands.

The graves at Marieval — which Delorme said were not part of a mass grave — were discovered by ground-penetrating radar which the First Nation, with the help of Saskatchewan Polytechnic, had been using since earlier this month on the grounds of the cemetery. He also said it’s not yet certain if all the bodies are children from the school. Delorme also stressed there could be a 10% margin of error, so he was working on the assumption there are “over 600” bodies buried at the site.

“We always knew there were graves here” through oral history passed along from elders in the community, he said.

The Marieval school, located about 85 miles east of Regina, Saskatchewan, opened in 1898. It was run by Catholic missionaries and funded by the federal government until 1968, when the government took over full control before handing over responsibility for the school to the Cowessess First Nation in 1987. The school closed in 1997 and was demolished in 1999.

In a statement addressed to Delorme and members of the Cowessess nation hours after the news conference, Archbishop Donald Bolen of Regina, said, “Words fail in the face of the news.”

“I can only imagine the pain and waves of emotion that you and your people are experiencing right now,” said Archbishop Bolen, who has met with the Cowessess people in the past. 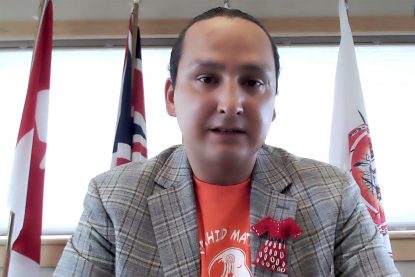 Cowessess First Nation Chief Cadmus Delorme announces the discovery of the unmarked graves of hundreds of people, in a still image from a videoconference in Grayson, Saskatchewan, June 24, 2021. (CNS photo/Federation of Sovereign Indigenous Nations, Handout via Reuters)

“The gravesite work brings us face to face with the brutal legacy of the Indian Residential School system, a product of a colonialist history which has left so much suffering and intergenerational trauma,” the archbishop said. “The operation of the Marieval Residential School at Cowessess left many people deeply wounded by various kinds of abuse.

“As you have communicated elsewhere, Chief Cadmus, even for those of us who were not there or not involved, it is nonetheless the painful legacy that we need to carry. The incredible burden of the past is still with us, and the truth of that past needs to come out, however painful, as only truth can lead to reconciliation. As you said of the gravesite, ‘the truth is there.’ Thank you for your courage as chief and that of your whole community as you seek out the truth and search for a reset that brings an end to racism and opens a path to justice and to healing.”

Archbishop Bolen said he had apologized in the past, “but I extend that apology again and pledge to do what we can to turn that apology into meaningful concrete acts — including assisting in accessing information that will help to provide names and information about those buried in unmarked graves — and to stand by you in whatever way you request.”

At the news conference, Delorme said the graves had been marked in the past, but in 1960 the headstones were taken down by Catholic Church representatives.

“We didn’t remove the headstones, that’s a crime in this country,” he said.

By putting a name to each and every person buried there, “we want to make sure we keep that place so we can heal,” said Delorme.

“A lot of the pain we see in our people comes from there,” said elder Florence Sparvier, a knowledge keeper in the Cowessess community.

Sparvier attended the Marieval school and recalled how the children were not treated very well by the Oblate missionaries and the nuns who ran and taught at the school.

“They made us believe we didn’t have souls,” said Sparvier, 80.

In 2019, the Archdiocese of Regina agreed to pay $70,000 to help mark the unidentified graves and add fences and trees to the Cowessess cemetery.

At the time, Archbishop Bolen said he was hopeful the funds would help move forward some of the Calls to Action of the Truth and Reconciliation Commission.

“Calls to Action 73 to 75 specifically call for churches that were involved in residential schools to become engaged in precisely that kind of work,” Bolen told CTV News in 2019.

At the news conference, Chief Bobby Cameron of the Federation of Sovereign Indigenous Nations said the discoveries of the Kamloops and Marieval graves — “and there are more to come,” have pushed forward the calls to enact true reconciliation.

“These stories will come out,” said Cameron. “Canada will have to work with us on reconciliation. Our people deserve more than apologies and sympathies. We deserve justice.

“There must be immediate change.”

He called on governments “to work with us — and they are.” That includes releasing all records pertaining to residential schools.

Bishop Bolen has visited the Cowessess grave site, said Delorme, “and has committed to what we want.”

“We have full faith the Roman Catholic Church will release our records,” he said, while also acknowledging the federal government “can move quicker but they are making progress.”

Delorme also called for a papal apology, one of the Calls to Action from the Truth and Reconciliation Commission report, a call that has reverberated across the nation since the Kamloops discovery.

“The pope needs to apologize for what has happened … an apology is one stage of many in the healing journey.”

The Canadian Conference of Catholic Bishops announced June 10 that a delegation of “elders/knowledge keepers, residential school survivors and youth from across the country” representing First Nations, Inuit and Métis communities is preparing to travel to the Vatican. The trip originally was scheduled for last year but was postponed because of the COVID-19 pandemic.

Archbishop Bolen said Pope Francis would be able to listen to their stories and hear, in person, what they need from him and the church.

In Vancouver, British Columbia, Archbishop J. Michael Miller has said the archdiocese will “offer to assist with technological and professional support to help the Tk’emlúps te Secwépemc (Kamloops) and other affected nations in whatever way they choose to honor, retrieve and remember their deceased children” and “commit to supporting the same process and resources to all nations in whose territories Catholic-run residential schools were forcibly located, and which fall within the historical boundaries of the Archdiocese of Vancouver.”

Conlon is managing editor of The Catholic Register, Toronto.