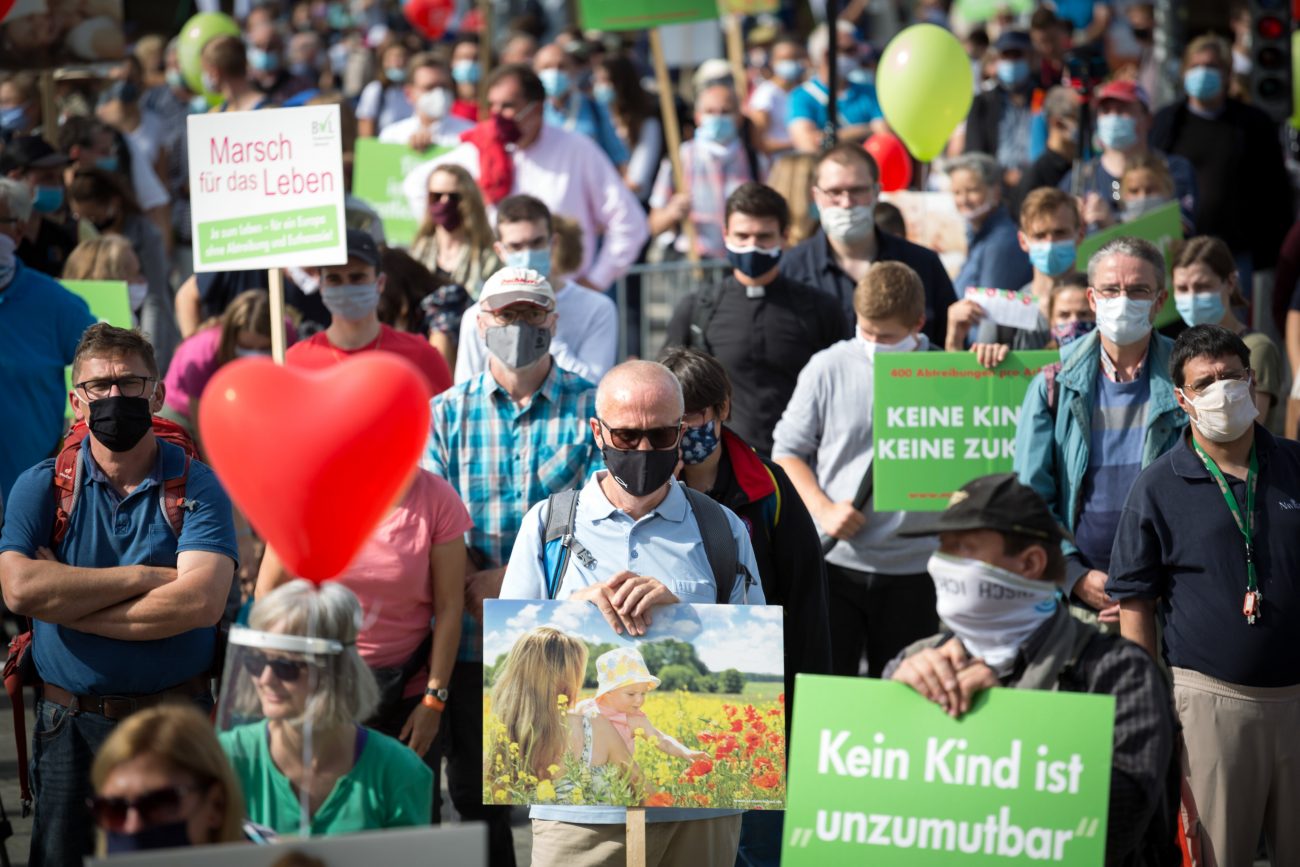 Demonstrators hold red and green balloons and placards at the March for Life in Berlin Sept. 19, 2020. Catholic bishops in the European Union have taken strong issue with language in a proposed EU health care report that characterizes abortion as a human right. (CNS photo/Gordon Welters, KNA)

BRUSSELS (CNS) — The bishops of the European Union, while applauding a proposed EU report on expanding the access of all women to adequate health care, take strong issue with the report’s characterization of abortion as a human right and its claim that “a total ban on abortion care or denial of abortion care is a form of gender-based violence.”

The report, submitted to the European Parliament by Croatian deputy Predrag Fred Matic, is scheduled for a vote June 23; approval of the report would not dictate changes to any EU nation’s laws, but could influence policy debates and public opinion.

In a statement June 17, the secretariat of the Commission of the Bishops’ Conferences of the European Union applauded “the fundamental concern of the report to protect the health and rights of women,” but expressed serious concern about its “one-sided perspective throughout, particularly on the issue of abortion,” because nowhere does it acknowledge that the life of the unborn child is at stake.

In addition, the bishops said, “the draft resolution does not reflect the tragedy and complexity of the situations in which mothers considering aborting their unborn child find themselves.”

The report, they said, cannot pretend that abortion must be legal in all 27 countries of the European Union. In fact, Malta and Poland have extremely restrictive abortion laws while the other 25 EU nations put varying restrictions on the voluntary interruption of pregnancies, particularly in reference to how far along the pregnancy is.

But in the so-called Matic Report, abortion is referred to as “an ‘essential health service’ that should be available to everyone,” the bishops said. “In our view, this classification is ethically untenable. A medical intervention of such magnitude cannot and must not become a normal practice; its qualification as an essential service degrades the unborn child.”

“As church, we are convinced that human life from the beginning, including unborn life, possesses its own dignity and independent right to protection,” the bishops said. “In the church’s view, abortion is not a means of family planning or part of ordinary health care.”

The bishops also noted “with concern and regret that the draft resolution negates the fundamental right to conscientious objection, which is an emanation of freedom of conscience.”

The draft report recognizes that most EU countries provide conscience protections in their abortion laws, but it “regrets that (the) sometimes common practice in member states allows for medical practitioners, and on some occasions entire medical institutions, to refuse to provide health services on the basis of the so-called conscience clause, which leads to the denial of abortion care on grounds of religion or conscience, and which endangers women’s lives and rights.”

The bishops urged members of the European Parliament to uphold the EU treaty’s recognition that “health policy and the organization and delivery of health services and medical care” is a national, not an EU responsibility, and that particularly in the case of abortion, policies are up to the individual nations to determine.